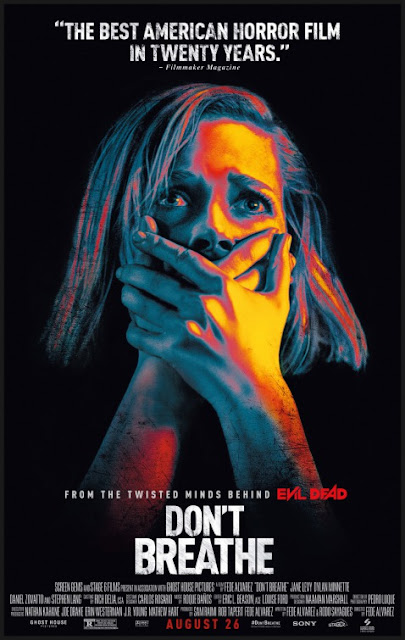 In a run-down, mostly abandoned neighborhood, there lives an elderly blind man whose named...The Blind Man (Stephen Lang). He's got a ton of cash he received after his daughter was run over and three young adults are hankering to steal all of that moolah. The three individuals looking to pull off this score are Rocky (Jane Levy), a single parent looking to take her daughter to a better life in California with this dough, Alex (Dylan Minnette), a paranoid rules-follower whose super apprehensive about the heist and Money (Daniel Zovatto), Rocky's boyfriend and the one who gets the tip about all of the money The Blind Man has.

The trio have pulled off plenty of robberies before, so they think they've got this in the bag. But once they're in the house, they learn that The Blind Man is mighty agile, far more so than one might suspect. And once The Blind Man learns that there are trespassers in his house, he boards up every exist, meaning our main characters are now trapped in this location with an individual whose very resourceful and prone to enacting grisly violence on those who cross him. The race is on to find an exit and evade The Blind Man's clutches.

Don't Breathe has a most consolidated storyline, as can be made apparent by the fact that the majority of the film takes place solely in The Blind Man's house. But even before the ill-fated robbery occurs, the film doesn't waste time introducing the audience to a bunch of pointless side characters. It gets the basic characterization stuff (namely introducing Rocky's cruel abusive mother as well as Rocky's daughter) out of the way right off the bat in a concise manner. We get the essential character-related groundwork that allows for the intensity that occurs later on in Don't Breathe to have some meaning, but such scenes also manage to not overstay their welcome, the film never gets boring or loses its sense of pacing during these neccesary sequences.

I do wish Money got more to him personality-wise, since, as he stands in the film, he's basically just an over-the-top stereotype whose stylized tendencies and dialogue don't really fit into the more down-to-Earth aesthetic of the film. On a similar note in regards to hewing too close to tired storytelling tropes, the way The Blind Man menaces Rocky towards the end of the story will be an all too familiar trope for those with even the barest familiarity with how women specifically are terrorized in many horror movies.

It's weird those two particular lazy flaws crop up in Don't Breathe because Fede Alvarez and Rodo Sayagues's script is otherwise quite exceptional when it comes to keeping the viewer at the edge of their seat wondering what kind of intense thrills are in store for our characters and, by proxy, the audience. The screenplay does a fine job with having a very realistic sort of consistency with The Blind Man's house with viewers who are keeping track of every detail of this location being rewarded by the stories ability to always tie up seemingly loose plot threads and pay off all set-ups. Wisely, gratuitous blood and torture as well as jump scares are eschewed in favor of character-centered scares, and since Don't Breathe is quite gifted with delivering both economic characterization and effective scares, combining the two results in some most memorable scare-fueled scenes.

The strong script is complemented by the similarly noteworthy directing from Fede Alvarez, who frequently utilizes wide shots and longer takes that help accentuate the sense of dread the characters are feeling. These three have to navigate around The Blind Man without making a sound, otherwise their fate is sealed and the physical space between these dueling characters is exploited in the aforementioned wide shots and longer takes that make the simple visual of these characters trying to avoid detection by The Blind Man by just standing completely still super terrifying. That strong visual sense is accompanied by a mostly-dialogue free turn from Stephen Lang, whose intimidating presence makes The Blind Man quite the memorable horror movie creation. Hopefully the always sublime Lang gets a major career resurgence from his exemplary work in the strong and terrifying motion picture known as Don't Breathe.
Posted by Douglas Laman (NerdInTheBasement) at 8:30 AM