Me Him Her Is Simply Generic And Aimless 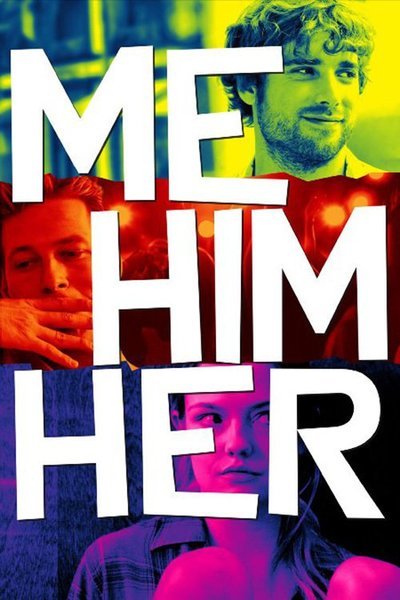 It's odd just how lifeless Me Him Her is considering how much it constantly strains to establish its own "quirky" and "unique" identity. On-screen text, usually depicted in various different colors and font style, pop up frequently for no good reason while more stylized elements (such as a giant penis that bellows "AAAH!! A PENIS!!" to two different sexually confused characters on two separate occasions) also crop up randomly. One gets the feeling these more heightened entities basically exist as a way to compensate for the lackluster script that thrives on being a hodgepodge of various American indie movie tropes.


That means this is one of the rare American indie motion pictures to focus on a small group of white twenty-somethings, with the lead being (of course) a straight dude named Brendan (Luke Bracey)  whose boring office job has got him feeling disenchanted with life. When he comes out to Los Angeles to help his best buddy, Cory (Dustin Milligan) come out of the closet, Brendan manages to hook up with Gabbi (Emily Meade), a lady whose just got out of a bad relationship and has never hooked up with a guy before. Shenanigans ensue as these crazy kids learn to find themselves in the crazy town of Los Angeles.

Me Him Her has this really weird problem of refusing to treat anyone in its cast of characters like an actual human being instead making each member of the cast a vessel for "quirkiness" and lines of dialogue intended to be casually profound but instead come off as simply nonsensical. It's also odd that the film is strictly centered on Brendan and his plight instead of being more of an ensemble effort or just focusing one of its side characters who have the potential to be far more interesting. Characters like Cory and Gabbi could have been fascinating in a different movie, but since their sole purpose in the story of Me Him Her is to boost up Brendan's morale when he's done, they never get the time to have their plotlines properly fleshed out.

Hell, Cory's reluctance about coming out, which is the event that kick-starts the story, is resolved in maybe two minutes, tops, after he's unwittingly dragged out to the desert by Cory and Gabbi. As for Gabbi, the screenplay seems to think her simply carrying the trait of being a socially awkward individual reluctant to let go of her past relationship is enough to convey depth. Additional character traits or glimpses inside what she's feeling right now don't really come out all that often since such character development would take away precious screentime from Brendan's misadventures as he....stumbles around L.A., basically.

Brendan is played by Luke Bracey, whose performance seems to be a mixture of Justin Long and especially an impression of Me Him Her's writer/director, Max Landis. Speaking of Landis, this is his feature film directorial debut and he does...OK, I suppose. To be fair, the films not poorly shot, at least the camera's kept still, but it's all very paint-by-numbers in terms of its filming style and the only sort of identity brought into the film on a visual level feels more perplexing than interesting. Like, why is there on-screen text that just pops up sporadically? Why? Is it to be cool? Edgy? Hip? Funny? What's the purpose of it?

Similarly failing to leave an impression is this film's humor, which constantly substitutes characters screaming in place of actually well-crafted jokes. There's also numerous various flashes of absurdity (like all that onscreen text or that talking penis) that, as near as I can tell, were intended to come off as humorously odd but just feel like examples of the movie straining to actually fill its running time with anything substantive, so why not just shove random junk into the story? The script for Me Him Her is a total clunker, one that passes up the opportunity for potentially interesting characters and storylines in favor of pointless weirdness and tired cliches.
Posted by Douglas Laman (NerdInTheBasement) at 8:46 AM

Email ThisBlogThis!Share to TwitterShare to FacebookShare to Pinterest
Labels: August 2016, Luke Bracey, March 2016, Max Lanids, Me Him Her, Movie Review