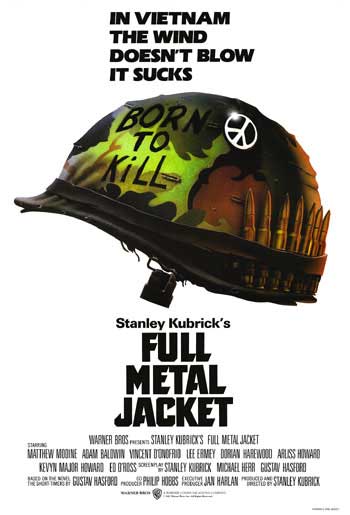 In the early 1960's, Stanley Kubrick created one of the definitive cinematic re-tellings of the Cold War in his farcical comedy Dr. Strangelove. Apparently, the potential world-shaping real-life events could have in terms of storytelling never left Kubrick's mind as 23 years later Full Metal Jacket was released. This time, the actual events that inspired this Stanley Kubrick movie was the two-decade long Vietnam War that basically impacted every aspect of American life you can imagine. How the news impacts people's perception of foreign affairs, the mainstream consensus of the military complexity, hell, the hippie movement in the 1960's, all were spurred on by the Vietnam War.

Full Metal Jacket goes overseas to the battleground where this battle took place, but first, the story concentrates on a group of soldiers training under the strict control of Sgt. Hartman (R. Lee Ermey). It is here we meet our main character, a man given the nickname of The Joker (Matthew Modine). After eons of intense preparation, The Joker and his fellow soldiers are sent out to Vietnam, a dominion that the film depicts as a hellhole like no other. There is no glory to be found here, with examples of bravery being rewarded with gunfire and pain.

One can clearly see the effects such an environment are having on the psyche of the individual soldiers throughout the movie, particularly in a segment where various soldiers are being interviewed for a documentary. Similar to Kubrick's A Clockwork Orange, Full Metal Jacket wants its audience to fully take in all of the nastiness that occurs in both the training required to be a soldier and every second of anguish going on on the front lines. It's a credit to the screenplay (which Kubrick penned with Michael Herr and Gustav Hasford) that most of this doesn't come off as exploitative for the sake of exploitive, instead clearly trying to explore darker ideas about the Vietnam War.

I say most because there are plenty of spots in Full Metal Jacket where it feels like the movies aimless in all the wrong ways. Most notably, there's a scene where the various soldiers hover around a prostitute, which is the second time the film has had our lead characters encounter a Vietnamese prostitute and neither sequence seems to add much to the overall movie. I suppose one could make an argument that the first scene with said prostitute at least shows the level of desperation many Vietnamese natives had to stoop to survive financially, but what purpose does the second instance of this carry then? This is probably the most egregious example of Full Metal Jacket just going into a desultory state, but there are more than few moments just like that scattered throughout the movie.

With all that being said, the climax of Full Metal Jacket fully gets to the heart of what this entire motion picture is attempting to accomplish in terms of overall themes and ideas; get to the dark heart of the Vietnam War. Here we see a small unit of soldiers pinned down by a lone sniper, one that's taking out characters left and right. The violence comes on-screen relentlessly and it's all filmed and edited in a masterful fashion. And then it all concludes with the reveal of the sniper's true identity, a revelation that leavesThe Joker, a character previously so filled with quips and sarcasm, lost for words.

This is by far the longest example of war-time action we see in Full Metal Jacket, but a level of noteworthy filmmaking runs through the majority of the movie. Kubrick's affinity for longer unblinking takes once again rears its head here in an appropriate fashion. I'm pretty assured in saying that Full Metal Jacket certainly isn't the best Stanley Kubrick movie I've seen, but I'm equally assured in noting that there's plenty of virtues to be found here, most notably in a climax has the nerve to go to an appropriately dark place storytelling-wise.
Posted by Douglas Laman (NerdInTheBasement) at 1:52 PM