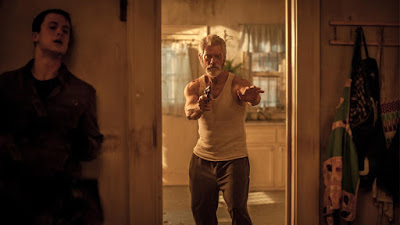 Hey folks, sorry for no box office report last Sunday. Last week was the first week of my new semester of college and preparing for that took precedence over writing up this column. But I'm back and we've got a lot of feature films to cover so let's get right down to the brass tacks!

While plenty of big-budget blockbusters have failed this summer, horror movies have meanwhile managed to thrive, with four horror movies (all costing under $41 million to make and three of the four costing under $15 million to produce) managing to open to over $20 million in the past two-and-a-half months. The newest of those four films was Don't Breathe, which debuted to a fantastic $26.1 million, way above expectations and managed to best the bow of director Fede Alverez's last movie, Evil Dead, which was a remake of a well-known horror feature. It's also the fifth biggest opening weekend for an R-rated movie in 2016.

The last weekend of August has been a solid time to launch a successful horror movie in years past (just look at the likes of Halloween (2007), The Final Destination, The Last Exorcism and The Possession) but it's also not a place where all horror movies can thrive. Just ask As Above/So Below and Don't Be Afraid Of The Dark. Luckily, Don't Breathe had some incredible reviews and a memorable marketing campaign that played up its distinctive premise to back it up, not to mention that its release date also managed to give it some space between the last notable horror movie, Nine Lives Lights Out. With strong word-of-mouth and the forthcoming Labor Day weekend by its side, Don't Breathe might have a leggy run ahead of it especially by the standards of typical horror movies.

In second place was three-week domestic box office champ Suicide Squad, which slowed down the heavy bleeding its faced in the past few weeks for a fourth-weekend decline of 42% for an $12.1 million sum this weekend. That's a larger fourth-weekend dip than fellow August box office juggernauts The Bourne Ultimatum and Guardians Of The Galaxy, but also a noticeably better fourth-weekend decline than fellow 2016 superhero films Batman v. Superman and Captain America: Civil War. In 24 days, Suicide Squad has now grossed $282.8 million. In third place was Kubo And The Two Strings, which grossed $7.9 million in its second weekend, a 37% dip from last weekend, slightly less than the 38% decline ParaNorman faced in August four years ago. Kubo has now grossed $24.9 million domestically.

Coming in at fourth place was Sausage Party, which dipped another 50% to gross another $7.65 million for a 17-day domestic total of $80 million. Rounding out the top five was new release Mechanic: Resurrection, which grossed $7.5 million, a 33% decline from the opening weekend of the first Mechanic movie and a 10% decrease from the debut of Hitman: Agent 47 last August, though it was up from the opening weekends of the last two Jason Statham vehicles, Homefront and Parker. It's sort of odd Mechanic: Resurrection got made, with the only logic I can think of explaining the movie's existence was that Millenium Entertainment (one of two financiers on the project) was hoping Statham's presence in two 2015 box office hits (Spy and Furious 7) would give him some increased exposure.

Rounding out the top were two summer blockbusters, with Jason Bourne coming in at ninth place to add $5.2 million, a small 35% dip from last weekend. Jason Bourne has now grossed $149.3 million and it should gross between $165-170 million before its domestic run is over. Meanwhile, one of the biggest box office duds of the summer, Ben-Hur, failed to regain composure in its second weekend of release, making another $4.5 million this frame, a 59% drop from last weekend. Ben-Hur has now grossed only $19.5 million domestic and will struggle to get past $30 million domestically, a catastrophic result for a big-budget film like this.

Hell Or High Water expanded into wide release this weekend (into 909 theaters specifically) and fared extremely well, grossing $3.7 million for a per-theater average of $4,098. Hell Or High Water has now grossed $8.5 million and has a strong shot at crossing $20 million in its impressive domestic run thanks to the Labor Day holiday weekend next weekend. Bowing in 813 theaters in thirteenth place was Southside With You, which received the widest opening weekend theater count ever for a release from Roadside Attractions (813 locations) and grossed $3 million for a decent per-theater average of $3,764.

Not faring so well in its debut this weekend was Hands Of Stone, which bowed in 810 theaters to underwhelming numbers, grossing only $1.7 million for a per-theater average of $2,141. I saw a trailer for this boxing film on the majority of the movies (including blockbusters like Suicide Squad) I saw this summer, yet that was basically the extent of the marketing, there really wasn't a whole lot done to promote the motion picture. It didn't help that the trailer for it felt derivative of boxing movies that had come before it and it didn't receive strong marks from critics, a necessity if an adult-skewing drama is gonna make it in the marketplace. The Weinstein Company previously had plans to expand this one into 2500 theaters this Friday, but I sincerely doubt that happens now.

Two smaller scale dramas opened this weekend, named Greater and Remember The Goal, but no official numbers are in for either movie yet. The same goes for Matthew McConaughey's new drama The Sea Of Trees which opened in 2-3 theaters in New York and Los Angeles. In terms of new arthouse releases though, we do have box office figures for The Hollars, John Krasinski's directorial debut that grossed $46,068 for a per-theater average of $11,517 while Howards End bowed with $24,822 in just two locations for a fine per-theater average of $12,411.

It's worth noting that two movies that opened on the same weekend this past summer concluded their domestic runs this past Thursday. The Conjuring 2 was one of these two films and it managed to gross a strong $102.4 million in its domestic run. While The Conjuring 2 was more front-loaded than its predecessor, it was still noticeably leggier than most horror movies and managed to do 2.5 times it budget in America alone. Plus, it grossed $217.7 million internationally, a noticeable improvement on the first Conjuring. Also ending its domestic box office run was Now You See Me 2, which proved to be a domestic box office dud by grossing only $65 million domestically, a 44% decline from the first movies domestic cume. However, it did manage to be one of the few blockbusters sequels this summer to improve on its predecessor internationally, and with a strong $255.8 million in foreign grosses, it actually wouldn't be shocking to see franchise-starved studio Lionsgate/Summit greenlight a sequel to this $90 million magician feature.

The top 12 this weekend grossed $98.8 million, a 44% improvement on this same weekend last year when Straight Outta Compton ruled for the third weekend in a row while this was the second biggest 3-day weekend ever for this time of the year. It's also worth noting that August as a whole will likely eke past $1 billion in terms of overall gross, only the seconed time in history the month of August has has grossed over $1 billion and a likely 19% increase on August 2015. You can chalk up the success of August 2016 to the presence of Suicide Squad, one of the biggest movies ever released in August as well as the presence of strong July 2016 holdovers like Jason Bourne, Bad Moms and The Secret Life Of Pets. Didn't hurt to have few sleeper hits in August 2016 like Sausage Party and Don't Breathe too.
Posted by Douglas Laman (NerdInTheBasement) at 8:36 AM