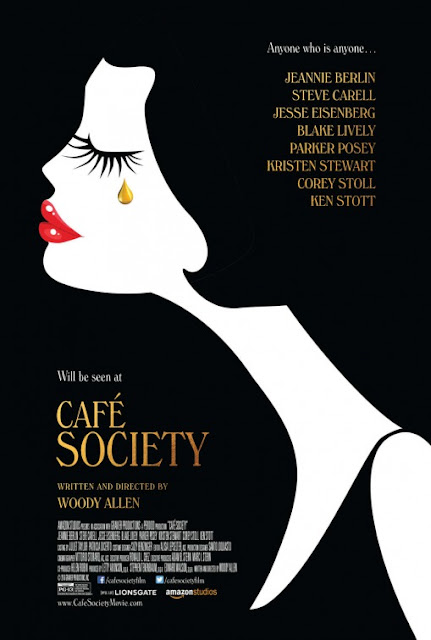 Woody Allen really stretches his boundaries as an artist with Cafe Society. Topics he's never touched in his forty-plus years as a filmmaker like the appeal of New York City and the romance between a pretty girl and a neurotic young man all show up here. Bold new storytelling terrain for the master filmmaker, wouldn't you say? All snarking aside, it's no problem for directors to have recurring traits or story elements in their work, but it does become a bit of an issue when said reoccurring aspects are executed in a paint-by-numbers fashion like they are in Cafe Society.

For Bobby (Jesse Eisenberg), the future lies in California, a place where his uncle, notable agent Phil Stern (Steve Carell), can help get him a job that'll put Bobby in the heart of Hollywood and all of the stars that inhabit it. While working for his uncle, Bobby begins to catch the fancy of a young lady named Vonnie (Kristen Stewart), whose already seeing someone. Still, fireworks spark between the two and where their relationship goes begins to impact Bobby's visit to Hollywood and in fact his entire life.

The way I've been describing Cafe Society to my friends and family over the past two days is that it's Woody Allen just jogging in place. He brings no new filmmaking traits, no new story elements that challenge himself or the viewer, this is most certainly a movie that comes across as a hodgepodge of cliches attributed to the director's past work. That's not an entirely a bad thing, particularly with the dialogue which still manages to deliver more than a few memorable lines, but overall it really does come off as a more average entry in Woody Allen's filmography and a more pedestrian motion picture in its own right.

Much of the problems lie in Woody Allen's script, which really fails on the front of creating interesting characters to inhabit this period era world. Bobby is written and played by Jesse Eisenberg as a character so very clearly a Woody Allen stand-in that he'd fit right in in a so-so SNL skit lampooning Woody Allen movies. Kristen Stewart, giving the best performance in the movie by a country mile, has a more unique character to play but her entire character is entirely at the mercy of the two men in her life and we never really get the chance to dig deeper into her psyche.

The rest of the supporting cast (which consists of Steve Carell, Parker Posey and Blake Lively) turns in fine work, but none of them really stand out aside from Corey Stoll as Bobby's gangster brother. With a dire lack of interesting characters populating this motion picture, Cafe Society's plot tends to turn tedious in several scenes, especially since even the most notable humorous moments are few-and-far in-between. At least the film looks really nice replicating the 1930's visual aesthetic in a pleasing manner via the wardrobes and various sets.

While it's a step up from the last movie of Woody Allen's that I've seen, Magic In The Moonlight (I did not see his 2015 effort Irrational Man), that's far from a high bar to clear and Cafe Society ends up being a pretty average effort overall. Playing this tale of unrequited love in the 1930's this seriously with a cast of characters this thinly developed is major flaw the movie just can't overcome. There are virtues to be found here in Kristen Stewart and Corey Stoll's performances as well as the sets and art direction, but Cafe Society feels like an obligatory effort from Woody Allen that dwells far more in the realm of unexceptional storytelling than it should.