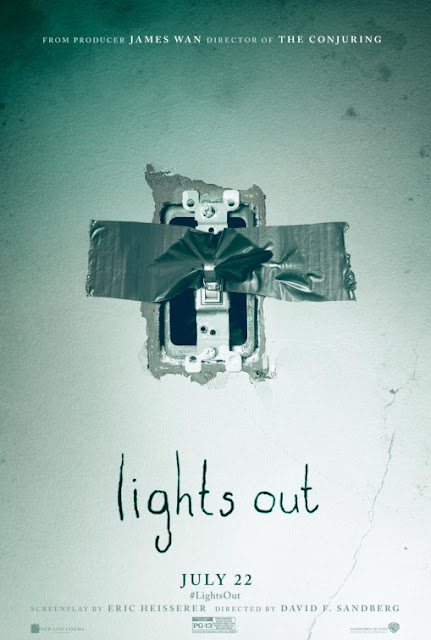 I've been afraid of the dark my whole life and I doubt I'm alone in that feeling. A darkened room is full of uncertainty, an element human beings in general don't handle very well. What could be lurking around in the dark void? Imagining what kind of horrifying creations could be existing out there in the murky abyss that we can't see has consumed the imaginations of people for generations. And, Lights Out proposes that a monster may be out there in the darkness, one that will destroy any given person provided that the lights off.

This being is called Diana and she's been terrorizing the family of Rebecca (Teresa Palmer) for years now. Diana seems to have a notable connection to Rebecca's depression-riddled mom, Sophie (Maria Bello) and is now terrorizing Sophie's stepson, Martin (Gabriel Bateman). Rebecca is determined to help her step-brother and hopes to survive and maybe even defeat Diana. Good luck with that idea Rebecca, because Diana is one powerful specter, one that's determined to cause chaos at all costs.

Lights Out deriving its premise from the universal fear of the dark is actually a clever conceit, one that builds on the similarly ubiquitous trepidation over the uncertain that's played into countless horror movies (most notably 1970's horror hallmarks like Jaws and Alien) over the decades. Adding in the extra layer of Rebecca's depression into the story is a bold move, since it's easy to see how a profound subject matter like that could easily stumble into the territory of "bad taste", but it's handled in a surprisingly thoughtful manner.

That's one of the smarter decisions found in the script for Lights Out and the idea to keep the story small-in-scale and character oriented is also much appreciated. But those positive facets make the notable foibles of the screenplay stand out to aq frustrating degree. Why is the dialogue so poor in several spots (Rebecca spouts out exposition regarding her absent father early on in the movie in a super clumsy manner)? Why is the relationship between Rebecca and her kind-of-boyfriend Bret (Alexander DiPersia) something the film seems to forget for long stretches even exists?

It's these story-related aspects of the movie that stand out all the more thanks to the various strong decisions Lights Out makes from a screenwriting perspective. It's also disappointing to see Lights Out resort to cheap jump scares that are about as un-frightening as you can imagine considering that it frequently employs actually effective scares revolving around built-up tension and characterization. The tendency for this movie to go the easy route on certain plot elements of scares really does come off as a major bummer since, like I said, there's some real flashes of innovation to be found here.

One thing that Lights Out most certainly gets major kudos for is its sound work. There are various points in the film where one can't see Diana in the dark but you can hear her clawing around or various bumps in the night. Massive props to the sound department on their superb work here since the creepy noises result in some of the best of Lights Out's assorted nerve-racking moments. Lights Out is a movie relying too heavily on slapdash elements that undermine some of its stronger aspects, but at least it's got the decency to bring some good scares and even a bit of depth with it. That makes it an OK (though certainly not as good as it could've been) motion picture in my book.
Posted by Douglas Laman (NerdInTheBasement) at 6:43 PM