Home (But Not So) Alone 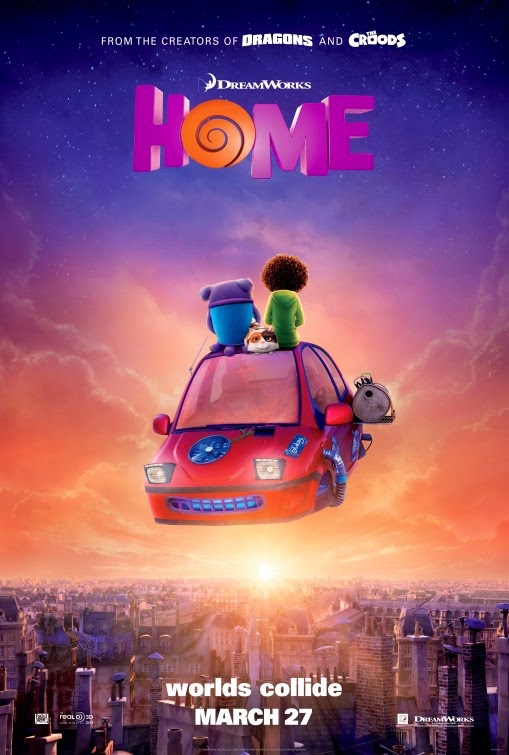 The world of sci-fi animaton is surprisingly sparse of huge successes, despite the presence of huge hits like WALL-E and Big Hero 6. Some of the biggest box office bombs of modern animation, whether they be deserved (Mars Needs Moms and Planet 51) or unwarranted (Titan A.E.) can be found here, and while early box office returns suggest Home will easily find it's way into the former category, it's also got more than enough flaws to come up as lacking entry in this subgenre of the animation medium.

One of the two protagonists of Home, an alien named Oh (Jim Parsons), is a pretty solid representation of the sort of lack imagination on display in the film, as his personality and arc are as cookie cutter in both concept and execution as they come. Ya see, Oh belongs to an alien species called the Boov, and these strictly structured critters don't care for Oh's overly joyous personality as well as his compulsion for social interactions.

Truth be told, it feels understandable why his fellow Boov would be wary of Oh; the character's tendencies that separate him from his alien brethren are played so broadly and over-the-top that it's hard to warm up to him as a character. He's more grating than lovable, and his fractured way of speaking only makes the time spent with him in the films opening scenes all the more difficult to enjoy. Thankfully, once he encounters Tip (Rihanna), a human girl, he has someone to bounce off of, and both his personality and vocals become more tolerable, even if he still does some things around her (namely trying to ditch her in one scene) that continue to make Oh a difficult person to connect with.

Tip, on the other hand, is maybe the movies biggest triumph. The choice of Rihanna to voice a middle schooler is a perplexing one, but the singer actually does a surprisingly effective job with the character, whose primary arc (she's searching for her mother, whose been abducted by the Boov) is far more compelling than Oh's trite storyline. She and the unorthodox alien have numerous escapades in their quest to get Tip's mom back, some of which have fleetingly amusing moments, many of which come courtesy of Steve Martin's character, the egotistical Captain Smeek, who has a habit for using ordinary Earth objects for avant-garde purposes (bubble wrap becomes his stress blanket for instance).

The design of these aliens and their spaceships reminded me of a children's picture book, with smooth surfaces and bright colors populating the film. An interesting dichotomy pops up when the primary villains of the Boov, the Gorn, are introduced, as their spaceship and species are marked with darker colors and sharper edges. In terms of character animation, The Boov seem to have been inspired by the minions from Despicable Me from a design perspective, but they're a bit less grating than those creatures and some decent comical mileage is had with their facial expressions and tentacled feet. For some reason, the humans in Home actually most impressed me; most DreamWorks Animation humans seem to look similar to me, Tip, her mom and the various humans seen in crowd sequences actually have a distinct look to them.

That's the sort of striking choice that Home could have used more of. Most other aspects of the production, whether it be from the recurring use of bathroom humor and generic sound effects or characters presented in a generic manner. Even some of the aspects that separate Home from it's fellow CG-animated family move ilk aren't perfect; for instance, the film has a habit of using music Rihanna and Jennifer Lopez (primarily the former singer) during key sequences in the movie. This sometimes work, but the usage of a Lopez song called Feel The Light has lyrics that feel a bit too on-the-nose considering where they occur during the story. But at least it's a song that's unique to the movie, which is an adjective that doesn't feel applicable to the majority of the feature. Considering that Oh's primary character arc is to embrace what makes him different from the other Boov, it's surprising how little Home does to make itself a distinguishable artistic entity.
Posted by Douglas Laman (NerdInTheBasement) at 8:57 AM