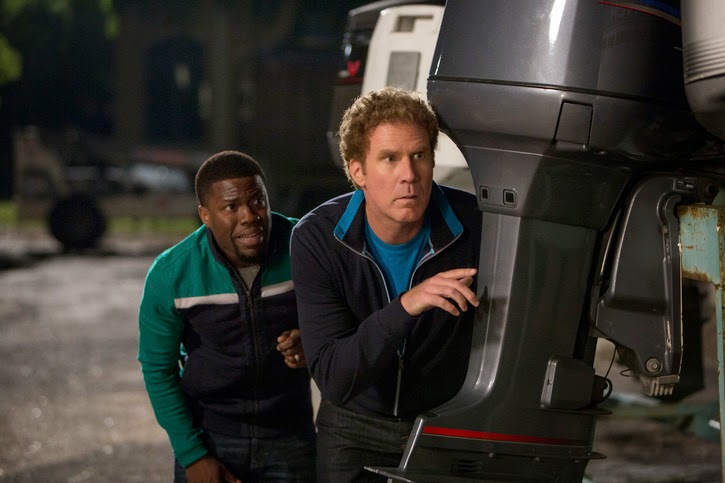 Two major features (and one expanding limited release) close out March, and both look like they're in close competition for the number one spot at the box office this weekend. It's tough at first to figure out which of the movies, Get Hard and Home, will be the bigger film, so let's get down to an in-depth analysis of these features,shall we?

Get Hard hopes to continue Will Ferrell's streak of box office successes, which have been surprisingly numerous over his eleven and a half year run as a leading man. As recently as December 2013, he starred in Anchorman 2 which managed to make $126 million. This time around, Get Hard pairs him with Kevin Hart, a smart move, as duo comedies (The Other Guys, Step Brothers, even The Campaign did solid business) have been quite successful for Ferrell in the past.

In terms of how this one will fare at the box office, one of Ferrell's past efforts give a hint as to how it'll play out financially. Specifically, Blades Of Glory, a 2007 feature released the weekend before Easter that was another buddy comedy (that one paired him with Jon "Napoleon Dynamite" Heder). That one opened to $33 million, and eight years of inflation and the humongous popularity of Kevin Hart should get this one to slightly higher numbers in the mid-30 millions.

Interestingly, just like how Blades of Glory debuted on the same weekend as CGI-animated family movie Meet The Robinsons, Get Hard opens this weekend against DreamWorks Animation's Home. That particular studio has had some financial difficulty as of late, but March has actually had a good track record for their movies. How To Train Your Dragon and The Croods were leggy movies that launched franchises, and even Mr. Peabody & Sherman opened to over $30 million (that latter movie bombed overseas though, resulting in a massive write-down).

Actually, Peabody might be a good way to gauge Home's opening. If that movie could get to $32 million in it's opening weekend, it's hard to imagine Home (which DreamWorks has marketed relentlessly lately) opening lower than that. It's also hard to imagine it opening substantially higher, but considering how well it's doing internationally, it likely won't need to do How To Train Your Dragon sized business domestically to be a much needed hit for DreamWorks Animation.

That limited release I mentioned in the opening paragraph is It Follows, which is going into at least 1200 theaters this weekend. This one's received great reviews that should give it a considerable amount of buzz, though I'm not sure it's going to break out and become a phenomenon. Meanwhile Insurgent will likely have a second weekend dip that's similar to Divergent, which dipped 53% last year. Finally, I have a hunch Cinderella will have a slightly smaller dip than past Disney live-action fantasy films released in March, thanks to Home likely not becoming a huge hit.