A Successful Quest For Comedy 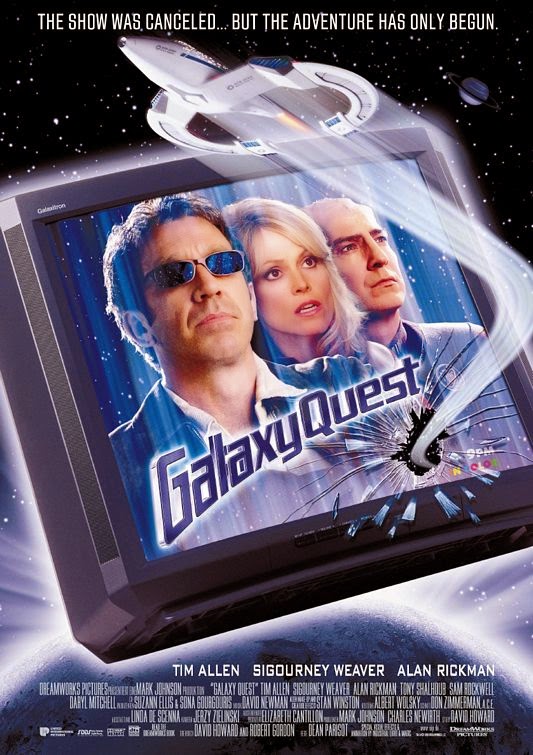 A quality cast can make a world of difference in a film, especially when other crucial elements of the movie (like a script, directing or the score) are similarly firing on all cylinders. Galaxy Quest, thankfully, assembles a roster of talented names and then gives them a super fun story to work with that manages to work as a Star Trek homage, an exciting sci-fi adventure, a send-up/love letter to nerds and one of the best projects Tim Allen has ever been in (it's obviously never as good as the Toy Story movies, but it does circles around those terrible Santa Claus movies).

The cast of the beloved sci-fi program, Galaxy Quest, has seen better days. Considering the dearth of acting opportunities the cast members have received in recent years, they appreciate the money appearances at comic conventions and store openings bring in, but they all wish to do something more with their lives. But when Jason Nesmith (Tim Allen) is recruited by a man named Mathesar (Enrico Colantoni), an opportunity for Jason and the cast to accomplish something truly important arises. The catch? Mathesar and his people are aliens, and they believe Jason and his fellow cast members are real space explorers who can help defeat a nefarious extraterrestrial brute named Sarris (Robin Sachs).

From the start, Galaxy Quest is making it no secret that it's lampooning Star Trek. It's name is an obvious parody of that sci-fi program, and several of the characters share notable traits with the more famous characters of that beloved real life franchise (Jason is obviously a play on William Shatner for instance). But the film is also an example of how to properly do pop culture references, as the story never makes it crucial that one know that this is a Star Trek parody. The characters and adventures they face work as their own separate and engaging entity, regardless of if you've heard of the word Tribble or not.

As I mentioned at the start of this review, the cast Galaxy Quest has assembled is a major part of it's charm, with various actors like Alan Rickman and Sigourney Weaver having a very real and believable dynamic against their fellow cast members and the wide variety of sci-fi oddities they encounter. Perhaps the highlight of the group is Sam Rockwell as Guy, a dude who was an extra on the show and constantly frets if his extraneous role on the show means he's doomed to die on their real life mission. This was the role that really pushed Rockwell to another level of fame, and it's not hard to see why, as the charm and humorous presence that marks numerous other roles in his career is on full display here.

There's a lot of smart decisions made within Galaxy Quest, but one particular decision I'd like to take note of is in the visual effects. Made in 1999, computer generated effects were at this point common as all-out, with fully CGI characters like Jar-Jar Binks even being seen in feature films. But there were still problems with these visual effects, namely in creating believable textures like fur. Galaxy Quest avoids having it's numerous moments of visual effects looking distractedly out of date by making it's CGI creations (like baby aliens or a giant rock monster) have textures that could actually be rendered at the time. While these effects don't look super advanced for a modern viewer, the wise decision to keep the effects do-able for the time when they were made is one of numerous smart moves on Galaxy Quest's part that keeps it immensely entertaining.
Posted by Douglas Laman (NerdInTheBasement) at 9:59 AM