It's A Hard Knock Life, For Us Viewers 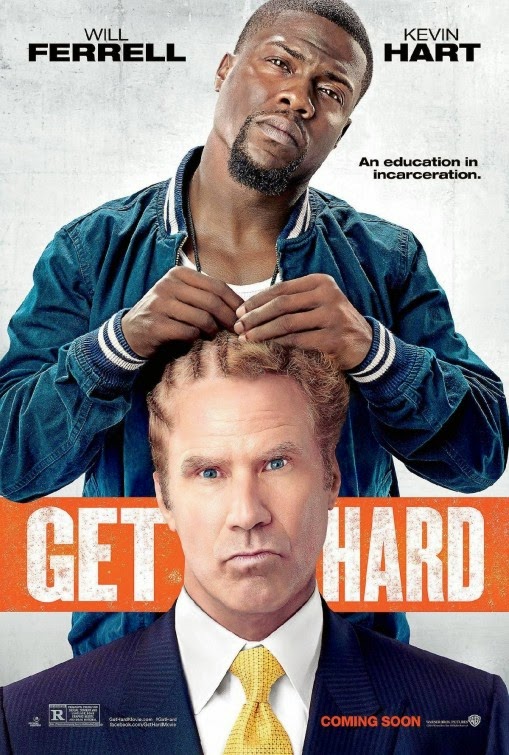 Will Ferrell's a great comedic mind, there's truly no denying. Anchorman and The Other Guys are two of my favorite comedies, while his various appearances on late night talk shows (namely on Conan) are always a hoot, thanks to his remarkable ability to keep a straight face no matter the situation, even when he's carrying a bird named Professor Feathers on his shoulder. In his newest movie, Get Hard, Ferrell manages to get a few moments of humor, though those bits and pieces of effective comedy just aren't enough to salvage this dire film.

Now, unless you've been under a rock for the past two months or so, you're likely aware that Get Hard pairs Ferrell up with Hart, continuing the former comedians recent trend of buddy comedies (other recent endeavors in this vein had him rubbing shoulders wit John C. Reilly, Mark Wahlberg and Zach Galifianakis), though the two don't exactly get to do anything even remotely interesting. The plotline of the movie pairs the duo by way of Ferrell's character, an uber rich fellow named James, recruiting a car washer named Darnell (Kevin Hart) to help prepare him for a lengthy prison sentence.

The major problems with this particular plotline as it unfolds in the story are two-fold; the first is that very little of actual comedic value occurs as Darnell trains James. There's one or two moments that got a guffaw out of me, namely when James has to fight three muscular dudes at a park (his meekly middle finger in this scene is the kind of humorous bit that'll be the fixture of numerous gifs in the future), but otherwise, it all gets very plodding and episodic. Not helping matters is how there's very little variety in structure or pay-off to these gags; they usually just end with James failing in some "hilarious" fashion while Darnell watches from afar.

Meanwhile, the second of those two problems is that the friendship between James and Darnell feels unearned, and when the movie first attempts a sentimental moment with the two, I was kind of taken aback. It's such an abrupt moment, but that's the kind of sloppy writing that's constantly being utilized within Get Hard. I cannot believe three different people (including Etan Cohen, whose the director here) to come up with the movies 782 different tired homophobic gags or the character of James' wife, played by the immensely talented Allison Brie. She gets to play the stereotypical unloving wife who only wants James for her money, and in the span of 15 words, I've given her far more depth than she gets in the film.

The directing has a similar lack of thought put into it, and although a few moments (like a prison riot sequence or when James exits his house in a Lil' Wayne inspired get-up) have some notable visual flair, they're anomalies within the feature, as the rest of the proceedings have a shocking lack of imagination when it comes to composing shots or conjuring up interesting visual gags. Not wanting to break up this pattern, the editing is also lackluster, with some really bizarrely poor moments, such as a shot of male genitalia that lasts for like a fraction of a second. In fact, when that moment happened, I actually thought something had happened with the projector! Turns out, it was just another piece of the insipid filmmaking that drives Get Hard, which is a movie that is certainly not easy to sit through.
Posted by Douglas Laman (NerdInTheBasement) at 8:44 AM