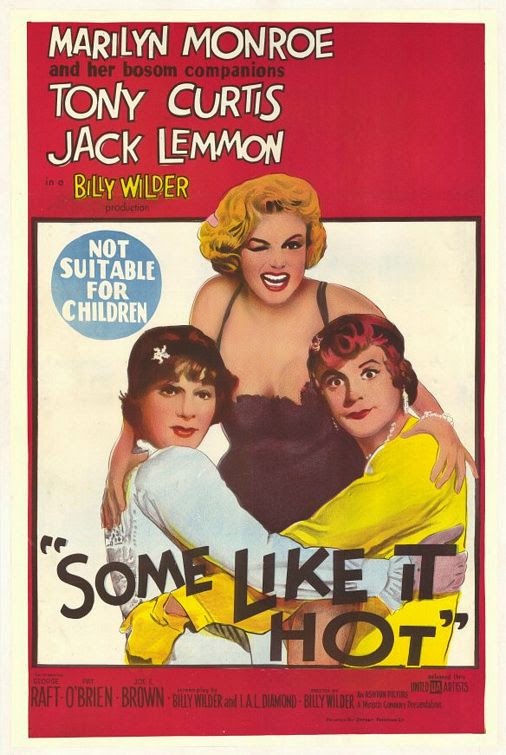 Starting with the opening sequence of Some Like It Hot, the film has a palpable sense of assuredness, with no dialogue being used in a car chase scene that utilizes escalation excellently in order to establish the movies primary antagonists and their menacing nature. That assuredness continues throughout the rest of the film, whether it's tackling the backstories of it's characters or the way the film embraces it farcical sensibilities.

I actually was unaware the film would have such a strong presence of farce, namely in the climax of the feature, but it fits well within the plot, which deals with two musicians, Joe (Tony Curtis) and Jerry (Jack Lemmon) who dress up as women so they can join all-female music troop in order to evade mobsters that want the duo dead. Although Google's characterization of farce notes that such works usually deal "crude characterization", I actually liked how the film treated it's most important players in terms of depth.

The movie knows just when to add complexity to it;s characters, while also realizing when restraint is the best approach. The latter tactic is seen in how there's no sob story given for how Joe and Jerry became close pals, which works totally fine; their rapport is so dynamic and engaging, it alone makes it easy to believe the two could be best chums. However, there's actually quite a bit of nuance to Sugar, a singer in the all-female music troop who both Jerry and, most notably, Joe fall for.

This specific personality is played by the legendary Marilyn Monroe, who manages to sell a tragic backstory (she hasn't had a good track record with relationships and her father doesn't approve of her music career) while acing the delivery of several comedic lines. Actually, speaking of lines, I found the dialogue of this motion picture to be surprisingly entertaining, with even the most mundane conversations being spiced with clever word choices and subtle, yet impactful, details.

Truth be told, there's countless of elements of Some Like It Hot (specifically, these are elements that are subdued yet manage to leave an impression on the viewer) that follow a similar model that managed to help make it such an enjoyable experience. The world that the film depicts is one that thrives on lovable lunacy, and I found it to be an irresistible charmer depicting some of the most well known actors ever known to cinema paired with a story that never runs short on wit and delight.
Posted by Douglas Laman (NerdInTheBasement) at 5:31 PM