As Plane As The Ann On Noses Face 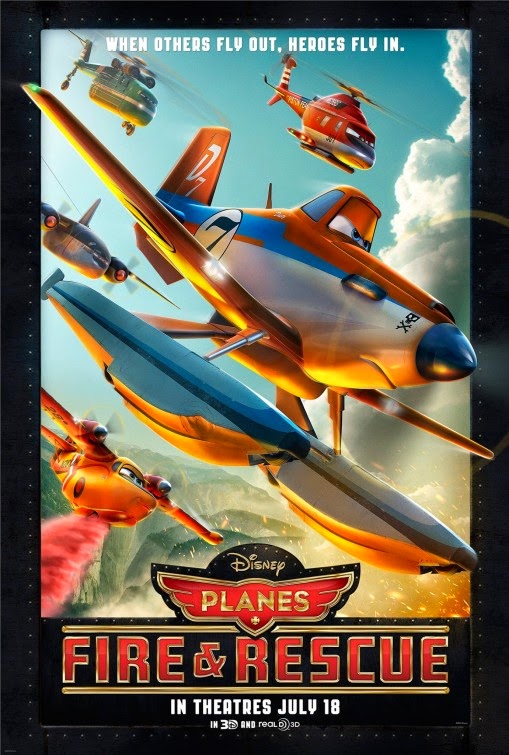 The entire Cars franchise fascinates me to a degree that would easily perplex 98% of the human population. I love the first movie, which is the most underrated PIXAR film in my book, but Cars 2 was a messy feature that was made solely for toys and commercial tie-ins. But here's the thing; John Lasseter, who directed the first two Cars movies and produces both Planes features, genuinely loves this franchise. The first movie originated from a very personal place inside of him, and his love for toys and marketing is why this franchise has such a high level of presence in the world of marketing (well, that and of course the fact that Cars stuff sells like hotcakes).

This sort of sincerity carries over to the very first frame of Planes: Fire And Rescue, which is a line or two of text dedicating the movie to the brave men and women who are firefighters. It's a nice move, but my legitimate question is this: why can't this sincerity result in better filmmaking? Planes was one of the worst movies of 2013, and while it's sequel may avoid those low levels of quality, it still fails to become anything remotely compelling. Considering that the film still has to work with the poorly realized characters of it's predecessor though, maybe it's not too shocking that Planes: Fire And Rescue is so shoddy.

Actually, only one of the characters from the first Planes movie returns in a major capacity to this movie, that character being Dusty Crophopper, still voiced by Dane Cook for some reason (his voice work is so bad and poorly fit for the character one wonders why the hell they didn't just hire legendarily talented voice actors like Tom Kenny or Billy West for the role) and still lacking any sort of winsome personality traits. It's not like he's crude or anything like that, it's just that Dusty is such a bland archetype of a protagonist that it robs the movie of having any emotional poignancy.

The reason he's the only character returning from the first movie is that Dusty is off to go earn a certification to become a firefighter with a group of planes and vehicle that battle blazing fires in a national park. The entire group contains characters who are nothing more than one cliche after the other, wasting talented actors like Wes Studi and Ed Harris, who play members of that team, in the process. It doesn't help that vehicular antagonists like a park superintendent (played by John Michael Higgins) are so overt in their villainy, and aren't even remotely entertaining while being so stylized, a sharp contrast to someone like Michael Keatons Chick Hicks character in the first Cars movie.

The animation, done by DisneyToon Studios (who get a logo here, unlike the first film, which helps a little in letting people know this isn't a PIXAR effort) is alright, with the fires that Dusty and his comrades face looking surprisingly solid, while the surfaces of the various automobiles and aircraft in the film look way too rubbery. But at least that aspect of the movie has effort put into it, unlike the features numerous attempts at humor, which made me crave the "subtlety" of Mater's worst gags in Cars 2. An extended fart gag, lots of screaming and a weird sequence set in a bar where what I'm guessing a bunch of rejected car puns from the first two Cars movies are just put on screen despite their irrelevance to the plot.

Maybe the creators of Planes: Fire And Rescue were hoping that audiences would overlook such blatant scripting flaws if the film was sincere in it's mission to pay tribute to firefighters. If that's the case, then let me just frankly say that such tremendously courageous people who fight fires on a daily basis deserve a better film than this. Like I said before, this one's at least better than the first Planes, but considering how incredibly poor Planes was, I'm not sure if that's much of a compliment.
Posted by Douglas Laman (NerdInTheBasement) at 8:34 AM