How Much Is That Doggie In The (Rear) Window? 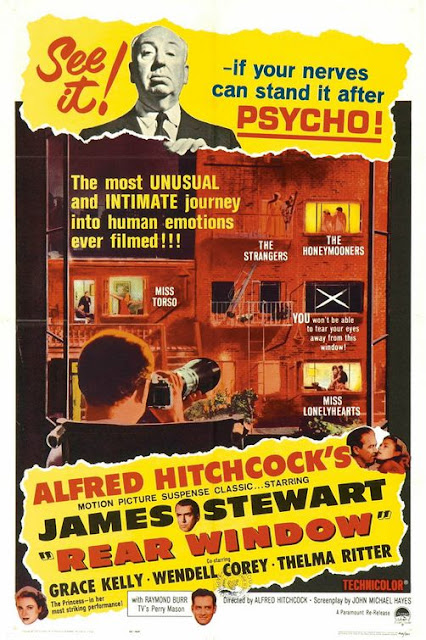 While his most famous films (mainly the annual holiday TV fixture It's A Wonderful Life) have given Jimmy Stewart an image in mainstream pop culture as a loveable good o'l boy, it is interesting to see Alfred Hitchcock's collaborations with the actor (in Vertigo and the subject of this review, Rear Window) dive into darker territory, ones that show off both different sides of Stewart and demonstrate what a versatile actor he is. Rear Window also serves as a splendid opportunity to take witness of just how much of a maestro Hitchcock is at conducting suspense in the most restrained circumstances. All he needs is a window, a neighborhood of various personalities and one man peeping at the world around him to create something truly gripping.

Confined to a wheelchair for weeks on end to help mend his broken leg, there's not much for L.B. Jefferies (Jimmy Stewart) to do beyond just looking out his window and gazing upon the various activities his array of neighbors get into. It's like multiple endless movies playing out all at once, a nice way to keep his mind distracted as he tries to heal himself up so he can go back to his job as a globe-trotting photographer. He's also gotta deal with problems he's having with his girlfriend Lisa (Grace Kelly) who wants the two to get married much to Jefferies chagrin. These are all the biggest concerns on Jefferies mind...until he notices a neighbor engaging in some suspicious activity.

This man's bed-ridden wife is suddenly missing, he hasn't seen her in that apartment for a few days. Where could she have gone? Considering her husband was just cleaning some knives, could....could her disappearance be chalked up to murder? It's a dramatic notion but one that Jefferies feel could be the explanation behind it and he's determined to get to the bottom of it. Now, Jefferies comes up with this notion while confined to his apartment, an environment the entire film takes place in. Neither the viewer nor the protagonist leave this room once during the course of the story. It's really quite amazing how much tension is wrung out of this singular setting as well as how much the purpose of the room can shift depending on the tone of certain scenes.

Sometimes, Jefferies domicile is a haven, one where he can watch is entertaining neighbors lives and gain a clear advantage in figuring out what a shady neighbor is up to in a very subtle manner. Other times, it feels like a prison, one he's confined to, most notably when it comes to fulfilling his obligations as a photographer (an opening scene shows him not being able to go out on a major assignment because of his physical injury). The room is able to capture so many different types of moods that reflect the protagonist's inner psyche in an incredibly subdued manner, just one of a myriad of ways that the more restrained aesthetic of this movie is used to create palpable and unique drama.

Four years before he paired up with Hitchcock again with Vertigo, Jimmy Stewart collaborated with that esteemed filmmaker for Rear Window, and it's easy to see why Stewart would have worked with Hitchcock again on then-future films considering the high level of quality in his work here. Jimmy Stewart uses his typical every-guy persona to great use to make his character concerns about an impending possible marriage feel real and he's also quite skillful at doling out Jefferies ever-increasing paranoia about what might just be going on in one his neighbors apartments. A stand-out in the supporting cast is easily Thelma Ritter as a sarcasm fueled individual named Stella, who gets the most memorable pieces of dialogue in the entire motion picture.

Actually, there's a really good job done in terms of casting the various inhabitants of the apartment complex that Jefferies watches over, all of them coming off like natural personalities you'd find in an everyday apartment complex and the screenplay by John Michael Hayes has some fun (and even creates some drama in the case of one lonely female resident) with these bit players throughout the course movie. That's the sort of thought that shows how there's a clear level of craftsmanship that goes into Alfred Hitchcock's thrillers which typically play on everyday concerns or fears and exploit said anxieties in the form of slow-burn thrillers that keep the viewer on their toes. Ya never know when the plot thicken or how things are gonna get more dramatic and Rear Window is an excellent depiction of Hitchcock's sterling ability to create some truly memorable thrillers. A more restrained setting does not limit his abilities as a filmmaker, rather, the man seems to be thriving creating subdued and quite captivating drama in such a unique environment.
Posted by Douglas Laman (NerdInTheBasement) at 9:39 AM