For A Movie Centered On Dares, Nerve Is Shockingly By-The-Numbers 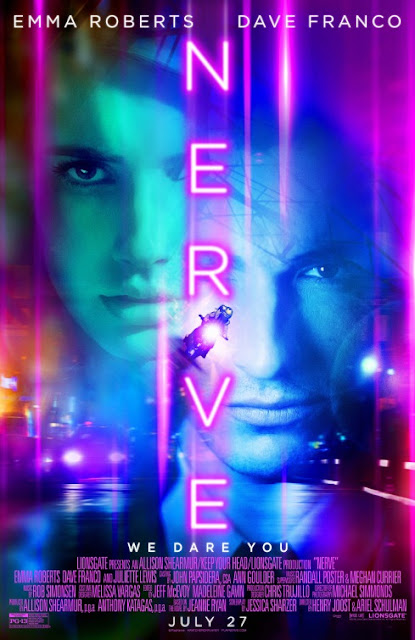 Directors Ariel Schulman and Henry Joost sure do love to contemplate the way technology informs the identity of modern day teenagers. Just as Akira Kurosawa frequently utilizes samurai in his tales or how Kathryn Bigelow examines the complex nature of modern-day warfare, Schulman and Joost seem to have a fixation on the way teens love their iPhone and internet judging by their past work like the 2010 documentary Catfish (which I haven't seen as of this writing) or the teaser trailer for their feature film Paranormal Activity 4, which centered on creepy things happening during a teenage girl's Skype call.

For their first wholly original non-documentary movie, the duo return to this concept once again for Nerve, the title of the movie referring to an online game wherein individuals can sign up to be Players, people who go around and do various dares in exchange for cash and glory. A more introverted teenage girl, Vee (Emma Roberts), decides to give the game a go after her friends tell her that her shy tendencies are making it a guarantee that life will pass her by. At first, the various dares she's put through seem innocent enough and even pair her up with the charming and attractive Ian (Dave Franco), another player in this internet-based game.

But Vee's pride soon swells as her amount of completed dares begins to add up, while the website Nerve might have some more malicious plans in store for those that try to upset its system. It all culminates in a solid enough climax that has the good sense to set some of its action to the tune of Johann Johannsson's song The Sun's Gone Dim. but to get to that concluding scene you have to sit through a lot of rudimentary content that really feels like the writers were hoping the potentially interesting concept at the center of Nerve would be enough to make the entire motion picture compelling.

That means the characters truly suffer from a lack of gripping traits or similarly engrossing dialogue. Vee is your standard shy bookworm High Schooler with Emma Roberts unfortunately not bringing anything to the role with her performance. But I can at least use one or two adjectives to describe Vee, something that'd be impossible to do with the ultra-tediously written Ian. Even the various dares (which could have saved this movie if they were super fun) the characters engage in aren't all that riveting. The explicit relationship to the characters that the assortment of dares carry basically begins and ends with "Vee is a shy person, these dares make her not shy" and none of the dares are entertaining enough on their own merits to compensate for the lack of notable depth.

Probably the most notable aspect of Nerve overall is its visual look, which drapes the majority of the environments in the film (sans for Vee's kitchen and school) in bright neon colors that give the films version of New York City a candy-coated look that's at least distinctive, even if, again, it doesn't really have a point to it in terms of substance. But hey, at least it's pretty. Beyond that though, Nerve really is a pretty plan movie, one that seems to have been assembled by a robot tasked with making a movie that aligns perfectly with everything that some corporate executive thinks millennials adore.

That's especially true for the soundtrack, which peppers the majority of the scenes with modern day hits and tunes in lieu of an actual score. It appears they're going for what Richard Linklater was doing with Dazed & Confused and Everybody Wants Some!! by having the soundtrack reinforce the ambiance of a specific decade, but in execution just comes across as Nerve trying to latch onto a number of popular songs in hopes that the artists behind such tunes will promote this movie. A potentially interesting idea that just doesn't work out in execution? That works as a nice way to sum up Nerve in its entirety. Another good way to sum it up is by noting that there are one or two interesting ideas in Nerve, but they get buried under a mountainn of monotony.
Posted by Douglas Laman (NerdInTheBasement) at 1:05 PM