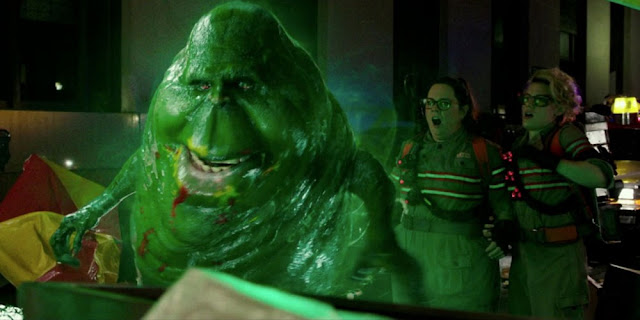 I'll be seeing Ghostbusters tonight but it looks like quite a few moviegoers decided to catch it last night at Thursday night showings that started at 7 PM. The Paul Feig remake/reboot of the classic 1984 Ivan Reitman motion picture took in $3.4 million last night. It's hard to find comparisons for the film, mainly because it's hard to tell if it'll play more like a conventional summer blockbuster (which would make it more frontloaded) or a conventional comedy since its been marketed as kind of both. In terms of summer blockbusters, this $3.4 million haul is bigger than the $2.55 million taken in by The Legend Of Tarzan, the $2.5 million take of The Martian (which debut outside of the summer) and slightly behind the hauls of Summer 2015 titles like the $3.7 million gross of Mad Max: Fury Road and the $4 million haul of Mission: Impossible- Rogue Nation. It also made 70% more than the Thursday night gross of Sony/Columbia's mid-July tentpole action/comedy from last year, Pixels.


In terms of comedies, Ghostbusters more than doubled the $1.5 million generated by Thursday night showings of Paul Feig's last movie, Spy and was up 85% over the $1.85 million Thursday night gross of Central Intelligence and was also up 90% over the Thursday night gross of Trainwreck. Judging by the size of its $3.4 million haul last night, it looks like Ghostbusters will likely play more like a summer blockbuster throughout the weekend. Honestly though, even just narrowing it down to summer blockbusters, the title I mentioned above are so all over the map in terms of how they played out over the weekend it's very likely Ghostbusters will chart its own box office course (whether or not that'll result in box office success is hard to say). We shall find out soon enough where the film will fall on its opening weekend and whether or not Sony/Columbia has gotten this franchise back on track at the box office.
Posted by Douglas Laman (NerdInTheBasement) at 10:09 AM