The Secret Life Of Pets Review 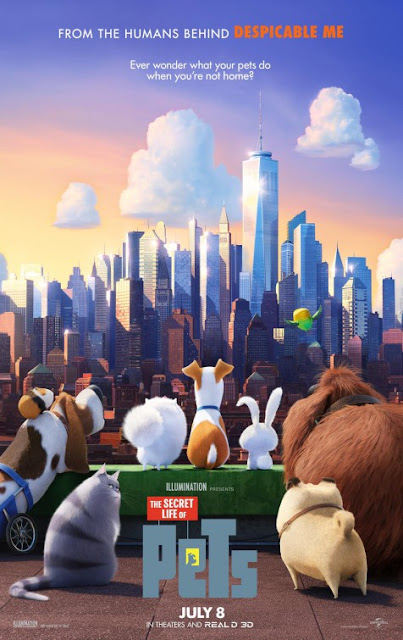 In order to save some time, cut out the middle man and all that, Illumination Entertainment should just pass out flyers containing toys and ancillary products related to their newest motion picture just before the movie starts. After all, if Despicable Me 2, Minions and now The Secret Life Of Pets proves anything, the studio is more of a factory to shovel out movies that can spin out cuddly Funko Pops! bobbleheads and beanie babies than a place where noteworthy pieces of cinema can be crafted. It's not an inherently bad thing to embrace the world of commerce, but rote nature of The Secret Life Of Pets is pretty blatantly just an excuse to craft toys prime and ready to be turned into toys rather than a chance to explore a potentially interesting, funny or heartwarming story.

As the title suggest, The Secret Life Of Pets focuses on your pets and their shenanigans that go on while you're away. Some party, others wait for their owners to come back.And then there's Max (Louie C.K.), a pooch who loves his owner very much and adores their close bond. But then she gets a new dog, Duke (Eric Stonestreet), a big o'l canine who begins to intrude on Max's previously serene life. The moment Duke enters the story super early, the sloppy script (penned by Brian Lynch) already begins to go off the rails. Duke is not so much a character as he is a liquid, constantly changing himself to fit the scripts needs. He lacks discernable personality and that becomes a massive problem for the film as a whole.

Think about all the great duos in cinematic history, ranging from recent highlights like Mellissa McCarthy and Jason Stahtam's characters in Spy or classic examples like Clarke Gable and Claudette Colbert's characters in It Happened One Night. These duos had contrasts in their demeanors that created plenty of humor, conflict, the whole deal. Since Duke doesn't really have a concrete persona to speak of, yeah, it's hard to get attached to him as a singular individual, much less buy him and Duke as at first rivals and then friends. It doesn't help at all that their growing kinship is handled rather poorly, they just sorta become best pals by the end not because of coalescing character arcs but rather because the credits are about to roll.

The issues with the script go way deeper than just one flubbed character though. Take a scene later on in the movie where Duke decides to return home to his old owner. It's fairly apparent this is supposed to be the films equivalent to the opening sequences of Up or Finding Nemo, an emotional gutpunch that truly sticks with the audience. But it's bungled in its execution in practically every way imaginable. It's introduced one scene prior in an abrupt manner, so there's no real build-up to it and its impact on the overall narrative is minimal. It doesn't really drive Max and Duke apart or bring them closer, it's just killing more time so this movie can barely inch its running time across the 90-minute mark.

That's the kind of lackluster effort that's gone into everything in the movie, from its humor (which relies heavily on bathroom jokes including plenty of on-screen defecation and urination) to even the  supporting cast, which consists of individuals who range from either being just one-note gags stretched out too far or various critters who don't have a purpose in the movie beyond just ensuring that every household pet imaginable is in the feature at some point. One notable exception is Tiberius, a carnivorous but lonely hawk voiced by Albert Brooks who has to constantly resist the urge to eat his cuddly co-stars. Brooks knows good comic timing like the back of his hand and he totally delivers in his underwritten but surprisingly amusing role that I wish got substantially more to do in the script.

On that positive note, I will say the animation in The Secret Life Of Pets is fine, even if the cost-cuttimg measures of Illumination Entertainment's animation department do seep through (notice how empty certain parts of New York City are that should be hustling and bustling with human extras for instance). Alexandre Desplat also has a great score that really evoked old timey New York City for me in a number of its music cues. Really, The Secret Life Of Pets isn't "dismal" or whatever, it's not even the worst animated family movie I've seen this year (never forget Norm Of The North). But its inability to do anything really innovative, interesting or fun really does get to you after awhile, as it becomes pretty apparent that The Secret Life Of Pets is just going through the motions and has no greater ambitions on its mind than hawking merchandise to younger viewers. Audiences of all ages deserve better cinema than that.
Posted by Douglas Laman (NerdInTheBasement) at 8:40 AM