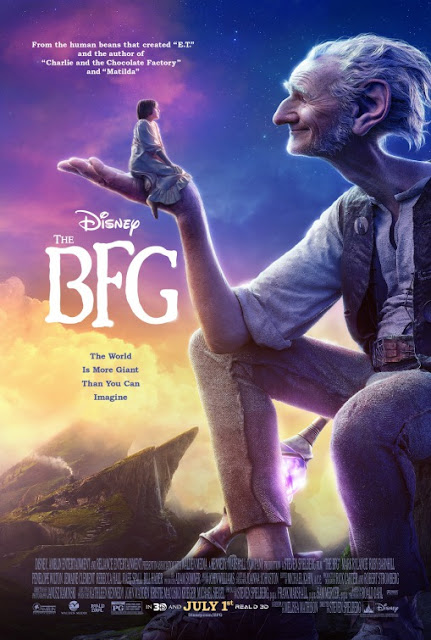 At this point, Steven Spielberg knows the name of the blockbuster game. Hell, he pioneered it with Jaws, which was far from the first movie to bring spectacle to the big screen, but it was the first movie to utilize release patterns and box office grosses that are all too familiar today. And while his newest The BFG isn't technically a "summer blockbuster", instead being a family movie, it's still got oodles of visual effects and a prime 4th of July summer release date, both elements that are familiar terrain for one of cinema's rightfully most celebrated auteurs. Returning to the realm of family fare for the first time since Hook (not counting his 2011 effort The Adventures Of Tintin), one might understandably query if the man's absence from this avenue of storytelling might leave him rusty, perhaps out of touch with the times.

Luckily, a good story and rock-solid characters never go out of style, and while The BFG doesn't come anywhere close to the quality heights of Spielberg's best family movie, E.T. or other recent noteworthy family films like Zootopia or Inside Out, it still fares quite well on its own merits and is heads and shoulders above a number of mainstream American family movie fare. The likes of recent run-of-the-mill kid-friendly fare such as Minions and Hotel Transylvania 2 wish they had an ounce of the wonder conjured up just in the singular scene alone where the titular giant (played by Mark Rylance) and his human companion Sophie catch dreams in a mystical pond.

Similar to E.T., which focused on the friendship between an alien and a boy named Elliot, there's also a friendship between a child and a fantastical creature at the heart of The BFG. Here, it is the dynamic between Sophie (Ruby Barnhill) and a Big Friendly Giant (Mark Rylance) that drives the plot, with Sophie catching a glimpse of the sizable figure one night in her orphanage before The Big Friendly Giant whisks her away to his homeland, Giant Country, so that she doesn't go blabbing about the existence of giants to the whole wide world. Here in Giant Country there are unusual vegetables and beverages, physical manifestations of dreams and nasty giants that make The Big Friendly Giant's life miserable.

Getting Mark Rylance (whose appearance here makes him look like he stepped right out of the Quentin Beck illustrations from the book that this movie is based on) to play the role of The Big Friendly Giant turns out to be one of the productions smartest moves, since he lends a grandfatherly presence to his dialogue that's useful in getting both Sophie and the audience accustomed to the unusual sights and sounds of Giant Country. You immediately buy the idea that this is indeed a friendly giant because, well, how could he not be friendly when he has Rylance's kind face and soft-spoken but charming voice? Considering he'll show up in future Steven Spielberg efforts like Ready Player One, it appears Mark Rylance is Spielberg's new good-luck-charm of sorts, which isn't shocking given how terrific his performances here in this film and in last fall's Bridge Of Spies were.

It also must be said that director Steven Spielberg brings a level of control to the film on a visual level that's really appreciated after a summer full of subpar motion pictures that just toss CGI and explosions into scenes willy-nilly. Here, there's plenty of lovingly crafted shot compositions, a sense of build-up, scale and wonder to be found throughout as The Big Friendly Giant chases dreams or attempts to slyly make his way across London at night. Natural elements like fog also crop up frequently to add a sense of mystery to the magical mysticism occurring on-screen. Who needs gratuitous shaky-cam or oodles of incoherent explosions when you can have actual visual artistry like this on the screen?

Now, just as this level of visual craftsmanship is one of the brightest spots of The BFG, the weakest aspect of the movie lies with those evil giants that gobble up humans and bully the Big Friendly Giant. Portrayed by the likes of Jermaine Clement and Bill Hader (the latter getting maybe four lines of dialogue total), these evil giants are too over-the-top in their nastiness to exist naturally alongside the more pleasantly muted and true-to-life personalities found in the rest of the film. To boot, it's hard to take them credible as a true menace when one of these giants talks exactly like that abominable snowman from that one Looney Tunes cartoon who wanted to take Daffy Duck home and pet him and call him George. That's a serious storytelling issue considering the finale of The BFG is propelled by the idea that these giants are somehow such a notable threat that they must be taken down immediately.

Luckily, even when it comes time to take down the under-developed antagonistic giants, the well-developed lead characters (Sophie and the Big Friendly Giant of course) manage to shine through. The BFG, all in all, is a welcome respite from conventionally noisy and visually jumbled messes that typically serve as summer blockbuster or family movie fare, but even on its own merits, it works quite well as an imperturbable tour through a visually gorgeous world with some well-rounded characters. A shame this one isn't doing so hot at the box office because I'd love to see more American family movies like this one that concentrate on character development and tying the spectacle into that instead of just centering a movie's entire plot on how many times the Minions can fart on each other.
Posted by Douglas Laman (NerdInTheBasement) at 8:30 AM