The First Trailer For Wonder Woman Is Online (Plus, Other News And Trailers From Warner Bros. 2016 Comic-Con Panel!) 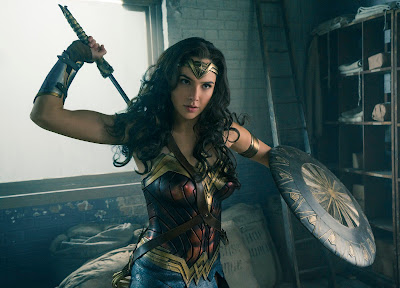 The amount of movie themed panels may have diminished at this year's Comic-Con compared to years past, but today brings two major panels in the esteemed location of Hall H that will surely rock the geek world. Those panels in question are the Warner Bros. and Marvel Studios panels, with both planning to divulge information about their upcoming movies. WB is going up first, with trailers for upcoming movies King Arthur: Legend Of The Sword, Kong: Skull Island and Wonder Woman planning to debut at the convention and will be appearing online shortly afterwards directly from the Warner Bros. YouTube page!

I'll be updating this post as news begins to pour in. The panel starts at 1:30 PM central time, so stick around and refresh this page for updates!

OK, so, panel moderator Conan O'Brien (whose talk show, Conan, is aired on TBS, a Cable TV station owned by Time Warner which also owns Warner Bros. Synergy in action folks!) kicked off the panel with an extended look at...

The DC films got a big push today, as the directors of the next three films in the DC Extended Universe (David Ayer for Suicide Squad, Patty Jenkins for Wonder Woman, Zack Snyder for Justice League, Rick Fumuyiwa for The Flash and James Wan for Aquaman) came out to chat about their individual projects with the swarm of people in Hall H. Speaking of directors, after months of speculation, Ben Affleck was officially confirmed to be directing and starring in a solo Batman movie and the film was confirmed to be released in between The Flash and Aquaman movies.

And then, we got our first trailer for....

After years of development, Wonder Woman's first live-action movie is hitting the big screen next year and director Patty Jenkins, Gal Godot, Chris Pine and Connie Nielsen showed up to talk about the movie and introduced attendees at Warner Bros. panel to the world premiere of the first footage from the motion picture! Luckily, the studio was kind enough to upload the trailer for Wonder Woman onto the interwebs so you can watch it below!

So, aside from the blue color grading in the battle scenes (an odd choice that I wonder if will make sense in the movie itself), wowza, what a trailer! There's humor and color in it! And the action is coherent! And Wonder Woman looks as confident and awesome as can be! Honestly, the entire last minute of this trailer had me just fist-pumping constantly, it looks that awesome! To say the least, Wonder Woman looks like it has some serious potential! 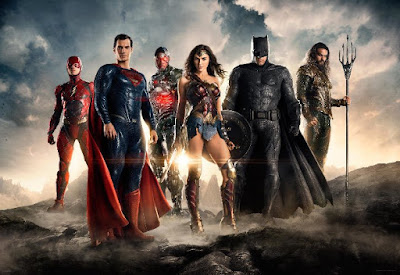 This awesome promo image (seen above) of Justice Leauge got released that not only shows the full team assembled, but shows them in (GASP!) sunlight!! The visual language of this shot indicates a tone of hopefulness! What madness is this??

Ya know what else got released? Some Justice League footage. Yeah, you read that right. Check it out. It actually looks pretty good to me, the guy who considers Batman v. Superman one of the worst movies of the year. Jason Mamoa as Aquaman is particularly a highlight of this trailer and Ezra Miller already looks like he could be lots of fun, even if his costume seems a little too visually reminiscent of Iron Man for my taste.

David Ayer and the cast of Suicide Squad then came out to talk about their forthcoming movie, which entailed KING a Hall H exclusive trailer that you can watch below!

Not as big of a fan of the second song in this trailer and the more melancholy opening doesn't quite fit in with the rest of the trailer, but I like a bunch of the visuals here and it's so good to see Will Smith back at being the charming cocky guy we all knew and loved back in the day after his performances in movies like After Earth. And woah, did Jai Courtney just make me laugh his fire joke? Also cute how the "Thank Squad" title cards at the end got all meta about how long the marketing campaign for this one's been running.

After that, it was time to move on to a different side of DC Comics movies, The LEGO Batman Movie! Direct Chris McKay and Will Arnett were on hand to show off footage from the movie and (you guessed it!) an all-new trailer!

And then it was time for something not DC Comics related...
KONG: SKULL ISLAND

You want a Kong: Skull Island trailer? Here ya go!

Very much a teaser trailer, but it's an eye-catching one no doubt. John Goodman monologues about humans insignifcant place in the world as some gorgeous shots build up to a kind of reveal of King Kong himself, or at least his head. I'm very curious to see more from this one, since it seems like they're smartly embracing it as a full-on "war movie" and that could lead to some interesting story possibilities. Oh, and the cast for this one is insanely stacked too.

And now for another non-DC Comics tentpole...

The fast-paced editing of Arthur telling his tale at the start of this trailer is very much classic Guy Ritchie, but the rest of this trailer looks like Peak Generic Fantasy Movie: The Movie. Washed out grey colors abound as does generic action that the trailer doesn't give much context or depth to. Hopefully the movie itself is far better than this generic trailer and that Jude Law as the bad guy of the piece finds plenty of time to chew up the scenery.

Not sure why Warner Bros. is releasing the trailer for this one today considering all the attention the Kong, Wonder Woman and Justice League trailers are gonna get. Looks like this will be the second year in a row where Warner Bros. debuts a trailer for a new Guy Ritchie movie (last year it was The Man From U.N.C.L.E.) at Comic-Con that gets drowned out by the DC movie that also debut trailers at the event.

After King Arthur, it was time for more fantasy as the director and cast of...

Fantastic Beasts And Where To Find Them
As everyone came out to talk about their movie, a surprise was revealed that the panel would be giving away wands to everyone attending the panel! How cool! And then, wouldn't ya know it, they also had a new trailer to show off!

OK, that's the Warner Bros. panel for 2016! I'll be back tonight to cover the Marvel panel!
Posted by Douglas Laman (NerdInTheBasement) at 1:16 PM