The Purge: Election Year Is A Majorly Forgettable Piece Of Action/Horror Satire 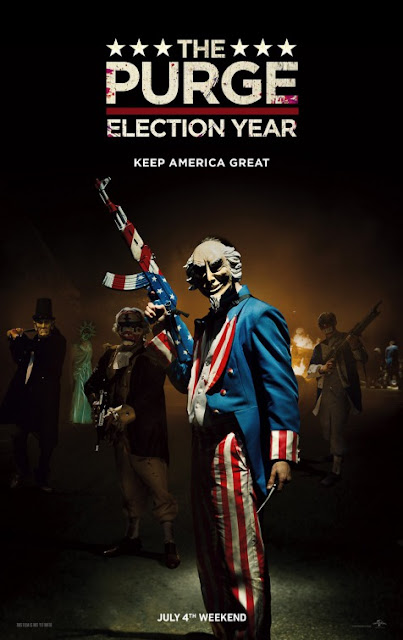 The first Purge movie back in 2013 was a blah movie that was heavy on trite storytelling and low on genuine scares while 2014's The Purge: Anarchy, was a so-so voyage into a Purge night that expanded the narrative scope from its predecessor with some lackluster characters and one or two truly inventive sequences. I wish The Purge: Election Year managed to even hit the moderate hits of that previous entry in this series, when it is instead a major step down in form that's surprisingly low on memorable action or scares.

The political satire undertones to the Purge holiday (which allows a singular 12 hour period every year where all crime is legal) that came to the surface in the second Purge movie are the center of this third movies plot. This time around, it's an election year and one of the two major candidates is Senator Charlie Roan (Elizabeth Mitchell), a staunch opposer of The Purge. Her adversary in this election is Edwidge Owens (Kyle Secor), a member of the New Founding Fathers organization that founded The Purge and controls most of the government. Though their political parties are not explicitly stated, Owens hyper-reliance on religious imagery and disdain for the poor plays into caricatures of the GOP that don't seem so far off the mark after this week's Republican National Convention.

With two months to go until the election, and Senator Charlie Roan and her anti-Purge message gaining strength, Owens and his superiors decide to take advantage of this years Purge to take out Roan. Luckily for Roan, her bodyguard is Leo Barnes (Frank Grillo), who returns from the second movie though is status as a returning player feels extraneous since nothing in this movie builds off of what he went through in The Purge: Anarchy (he's also aged quite well considering this third movie takes place over a decade after the second film). Anywho, Leo and Charlie Roan have to survive the night, dodging various Purgers in addition to Roan's political rivals.

It's basically a rehash of the "survive the deadly night in the city" plot from the second movie with a greater emphasis on the anti-Purge resistance and a higher level of prominence from the political satire elements being the only key differences in this new entry in the gruesome saga. Director James DeMonaco is basically going through the motions with this franchise at this point, leaving plenty of room in the running time for people in elaborate costumes and masks to run around and do sadistic things since that seems to be the one element in the first movie and its marketing that people responded to. Much of that stuff doesn't even directly relate to the plot or main characters, with Leo or Charlie frequently just looking off to their side at some unspeakable horror that is just there simply for the sake of empty spectacle.

While his character reeked uncomfortably of being a perfect example of a "white savior" in the second movie, Frank Grillo at least got to be a steel-jawed bad-ass in The Purge: Anarchy with a clear role in the story, which is more than he gets here. Like I said above, there's really no reason for this to be Grillo's character from the original, he could have been traded out quite easily for a new character played by someone like Thomas Jane with ease. A shame, since Grillo gets wasted in his part here and the same can be said for Elizabeth Mitchell, who's just around to look concerned in the background of certain scenes and be a damsel-in-distress that the main characters can rescue in the climax.

If you're looking for any horror in The Purge: Election Year, don't bother, since there's not much in the way of actual scares or even just disturbing imagery. Donald Trump's sadly-all-too-real speech from last night was way more scary than anything found here. The Purge: Election Year is such a rote horror sequel the only other thing worth mentioning is that I found it humorous that the Neo-Nazi (with a Swastika tattooed on his neck) tasked with hunting down our main characters has not one, but TWO Confederate Flag patches sewn into his uniform. Dude is not subtle about his bigotry, no siree.
Posted by Douglas Laman (NerdInTheBasement) at 2:01 PM