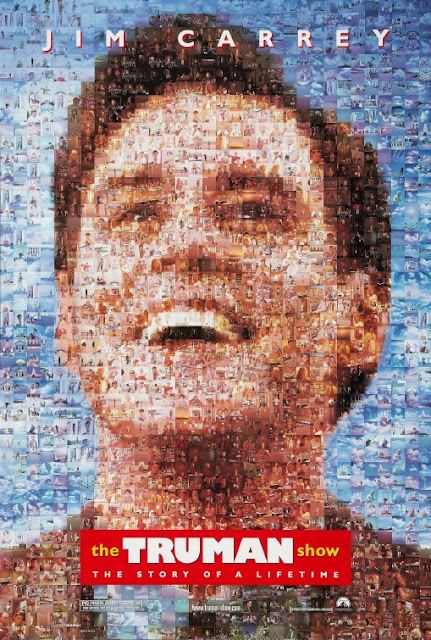 Like fellow late 20th century movie star Mel Gibson, Jim Carrey is basically a no-show in the modern day world of pop culture. For a while there, Carrey was unstoppable at the box office and even at the dawn of a new millennium, he managed to crank out hits like How The Grinch Stole Christmas and Bruce Almighty that dwarfed the work of any other comedic actor on the scene financially. And then...it just stopped. I'd personally chalk that up to his public support of the anti-vaxxer movement, which made headlines in 2008 and cast a dark shadow over any future attempts (like his 2008 movie Yes Man) to mine that everyman personality that was at the center of many of his biggest 1990's hits. There was an element naivete to those characters that could be cute and charming at times, whereas his real life naivete was dangerous and ignorant.


But before his career came to a halt, Jim Carrey did have some critical successes, namely The Truman Show, a fascinating tale of human psychology that Carrey absolutely excels in. The premise is immediately a captivating one; a man named Truman (Jim Carrey) has, from the moment he's born, his entire life televised to the world. Truman is unaware that his entire existence is part of some TV show and he's contained to an island community where he can live out his days in a desk job while the world watches, riveted by his day-to-day life.

Jim Carrey strikes me as an actor that could have made it, with no problem, in the world of silent films. It's no secret that the guy relies heavily on physical mannerisms in his performances, but most of the time (in dreck like The Grinch), it comes off as nothing more than just irritating. Here though, he's far more restrained and there's never really a moment where he just goes over-the-top for a cheap laugh for no real reason. To boot, the man's reliance on body language is used to superb effect in certain scenes where dialogue is renounced entirely. You see, there are certain scenes where Truman is starting to figure out that something's up, that his life may not be what it seems.

His attempts to figure out what's going (one moment has him being able to stop any oncoming car in the street) are masterful examples of how much emotion Carrey can convey with his facial expressions and the tiniest twitches of his body. Like I said, Carrey feels like he could have been a master in the world of silent cinema just as he's exceptional here both in dialogue-free sequences and the rest of the movie. Carrey plays Truman as a man filled with optimism, but a sense of wanting, a universal emotion felt by all souls on this planet, regardless of your circumstances. The script is able to add in a powerful sense of tragedy to Truman's life enhanced by the audience's knowledge that he has no control over his existence, something Carrey taps into to create a memorably harrowing but instantly lovable creation.

Director Peter Weir (another individual whose, like Jim Carrey, faded off the map despite garnering a Best Director Oscar nomination for his fantastic work here) paints Truman's island-based hometown with plenty of white-picket fences, chatty neighbors and other elements straight out of Americana imagery pioneered in the 1950's. The choice of this environment shows a keen level of cogitation on the part of the screenwriters, as it's easy to see some TV executive in this movies universe feeling this type of neighborhood would be the most palatable to as wide of a viewership as possible. But in terms of the movies story, it adds an eerie layer to Truman's life, as everything seems too manufactured and devoid of boundary-pushing identity.

The Truman Show is that kind of multi-layered movie ,the sort of motion picture that shows an incredible of craftsmanship on so many levels. And it's all tied together by a strong lead turn by Carrey, whose particularly amazing in the final scenes of The Truman Show, where he comes to terms with the reality he's been unwittingly living in his whole life. While I'd heard good things about The Truman Show in the past, I was happily surprised how much depth is to be found here. In fact, the incredibly well-handled contemplation of one's place in the world reminded me greatly of the introspective works of Charlie Kaufman. The Truman Show starts out with a most intriguing premise and thankfully more than makes the most of it.
Posted by Douglas Laman (NerdInTheBasement) at 1:45 PM