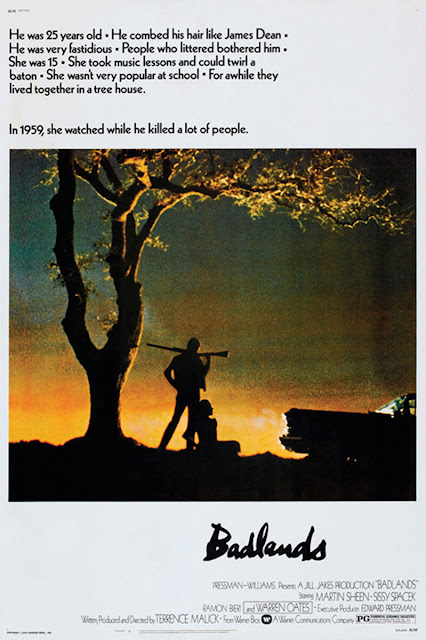 The 1950's are widely seen as the era where the archetype of American teenager came into its own. And with that archetype came various stereotypes of teenagers that would emerge in media depictions of this age group, namely that of the "bad boy/good girl" dichotomy. Badlands stems from one single idea that is inspired by a true story, which seems to be to take that specific "bad boy/good girl" idea and take it to its most graphic extreme as a way to contrast with the seemingly idyllic vision many carry about the 1950's. White picket fences and automobiles from this era are set against a backdrop of violence and deceit.


Weirdly, Badlands feels almost like a movie ahead of the curve, as future 80's movies would utilize this dynamic of the "bad boy/good girl" routine in the likes of Dirty Dancing and play it completely straight to uncomfortable results. Patrick Swayze breaking a car window in Dirty Dancing is supposed to come off as a cute showcase of assertiveness but in execution seems to be a sign of the character being a psychotic madman. At least Badlands realizes that such traits aren't "adorable", as, even before the "bad boy" of this movie, Kit (Martin Sheen), begins showing violent tendencies he's already depicted as an anger-riddled 25-year-old loser engaging in a super creepy relationship with a woman, Holly (Sissy Spacek) a decade younger than him that the movie very much recognizes as extremely disturbing (which is more than can be said for the oblivious nature found in the likes of Dirty Dancing).

Uncovering the creepy underbelly of the "bad boy/good girl" dynamic is really it for storytelling innovation in Badlands, which otherwise is a pretty tepid movie that demonstrates how Terrence Malick didn't wait until the 21st century arrived before making over-long portentous motion pictures that add up to nothing. Some examples of effective dark humor (like Kit shooting a football that he dubs excess baggage) crop up at least, but those infrequent moments aren't around nearly enough to justify the otherwise tedious nature of the movie.

It's actually surprising how sloppily made Badlands is at times, especially in early sequences depicting conversations between Kit and Holly. The duo's dialogue exchanges are an amalgamation of various elements going horribly awry. Line deliveries from Martin Sheen and especially Sissy Spacek (who appears to be playing her role as a helpless waif, but comes across just bored) are creepily stilted for no real reason while the disruptive editing robs their conversations of anything resemble natural rhythm. It's like someone who has no idea how human beings communicate was in charge of these scenes and they come across as laughably inept.

Once the two go on the lam (thanks to Kit murdering Holly's father), things improve from a filmmaking and storytelling perspective, though Holly's pervasive narration persists for some reason in this part of the movie. I think Terrence Malick (whose the sole screenwriter on the project) was trying to evoke the sort of aforementioned idyllic nostalgia many have for the 1950's with this narration as a sort of dark joke (she's "fondly" reminiscing about various murders and run-ins with the law), but it just comes across as a way to hit the audience over the head with concepts or ideas that could have been conveyed much much more efficiently in visual form. But Malick loves his narration the same way Donald Trump hates people of color and it's an aspect of this movie that he would carry on throughout his career to aggravating results.

Terrence Malick attempts to emphasize the darker side of a time period many have an eerie level of nostalgia for, but his one-note idea of depicting an eldritch "bad boy/good girl" relationship just isn't able to sustain a movie in this format. The problems that persist in two of Malick's three most recent effort (I couldn't finish To The Wonder, for the record) actually show up here in Badlands in spades, namely a scattered script that comes across as more indulgent than thoughtful and a lack of anything remotely of substance for female characters to do. They say the more things change, the more they stay the same, and in this case the issues that plague Malick's modern-day efforts are still cropping up in his directorial debut from 43 years ago.
Posted by Douglas Laman (NerdInTheBasement) at 11:09 AM