Set Phasers To Awesomeness For Star Trek Beyond 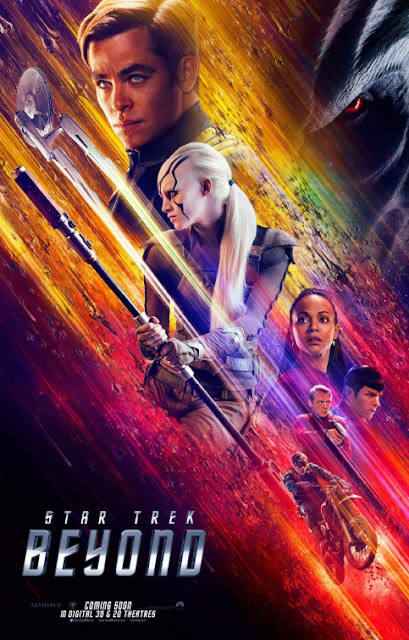 Each of the Star Trek movies that have emerged since 2009 seem to have taken direct inspiration from different noteworthy motion picture. That first feature in this rebooted franchise was very much inspired by the success of then recent reboots like Batman Begins and Casino Royale while Star Trek Into Darkness was an obvious attempt to mimic how most second films in major blockbuster franchises (think The Empire Strikes Back) are the "darker" story. Now Star Trek Beyond arrives very much as a post-Guardians Of The Galaxy Star Trek adventure. Colorful looking aliens have a greater presence than they did in the last two Star Trek movies, tunes from the 80's surface at critical moments, there's a greater emphasis on the dynamic of the main group of characters and new character Jayllah (Sofia Boutella) and her trait of not quite understanding certain aspects of the English language bear a notable similarity to Drax The Destroyer.

Lest you think I consider Star Trek Beyond taking cues from Guardians Of The Galaxy a bad thing, remember, I loved that James Gunn motion picture and taking some inspiration from Star-Lord and pals gives this new Star Trek adventure a zip of fresh energy it very much needed after Into Darkness. The story in this go-around is that Captain James T. Kirk (Chris Pine) is beginning to feel the strain of being in command of the U.S.S. Enterprise three years into his five-year long mandated mission. He's still struggling to figure out who he is and the concept of coming to terms with one's identity is something Spock (Zachary Quinto) is also struggling with since he is torn between his duties to the Federation and his commitments to help rebuild his species.

Their internal conflicts are the heaviest thoughts on their minds...at least until a pack of merciless aliens, led by Krall (Idris Elba) attack the Enterprise. It is here that the crew is left stranded and separated on an alien planet and disconnecting the group into packs of two makes for plenty of interesting character moments as the various individuals in this story come to terms with Krall and his plan. The best of these pairings has got to be Spock and Bones (Karl Urban), which allows for Spock's rigid 100% serious demeanor to clash with Bones wise-guy pessimism to hilarious results. The only main character who really gets managed to get nothing to is poor Uhura (Zoe Saldana), who basically exists only to be captured by Krall as an incentive for Spock to come and rescue her and so Krall has someone to spout off expository dialogue to.

After Star Trek Into Darkness rehashed numerous elements of past Star Trek movies, it's so great that Star Trek Beyond finds plenty of room to create new characters for Kirk and co. to interact with. Chief among these new individuals is Jayllah, an alien who's got a bone to pick with Krall and his crew.  Sofia Boutella brings a warm and friendly presence to Jayllah while fully owning her characters ferocity in combat. Boutella also gets to don some awesome make-up effects that give her a memorable visual appearance while her character is serviced well by Simon Pegg and Doug Jung's script that is exceptional in how well it establishes and pays off certain aspects of her personality.

The level of thought that goes into the movies script is evident in new bad guy Krall, a foe who has not been done justice by the movie's ad campaign. A nuanced adversary, Krall has anger towards the Federation and all that it stands for that Star Trek Beyond carefully dishes out across the course of the story in a well-paced manner. Like Jayllah, Krall has some awesome make-up effects that make him quite unlike anyone else in the movie visually and Idris Elba continues to be the unsung hero of geek cinema with his menacing turn here. Anytime Kirk, Sulu or Uhura are standing next to this guy, Elba just emanates a towering presence without him even saying a word or moving.

There's been plenty of ballyhooing, particularly after that first teaser trailer that heavily featured The Beastie Boys Sabatoge, about whether or not director Justin Lin would end up removing any of the brains from Star Trek instead of flashy spectacle. On the contrary, there's a fantastic balance between the cerebral and entertaining pageantry to be found in Star Trek Beyond. There's a remarkable emphasis on character motivation in even the most action-heavy sequences (which manage to avoid the visual tropes of many American blockbusters like a muted color palette or imagery evoking 9/11), that the noteworthy cast handles extremely well. Meanwhile, Justin Lin's experience with creating memorable action in the two of the best Fast & Furious movies (he directed the fifth and sixth entries in that series) means there's also plenty of indelible excitement to compliment the character work.

Equilibrium is the name of the game for Star Trek Beyond, which dares to ask "Why can't we have both complex characters and super fun action?" Why not indeed, especially since Star Trek Beyond handles both elements super well. Something else worthy of praise is the visual style of the overall move, especially the look of a heavily populated Federation Space Station, whose sleek futuristic utopian resembles the Elysium space station except it actually holds up to even an ounce of logical scrutiny. It's a hustling and bustling environment that has untold storytelling possibilities in and of itself and yet manages to not distract from the primary story at hand. A deft achievement that's one of the many awesome storytelling accomplishments Star Trek Beyond achieves with flair to spare.
Posted by Douglas Laman (NerdInTheBasement) at 10:30 AM