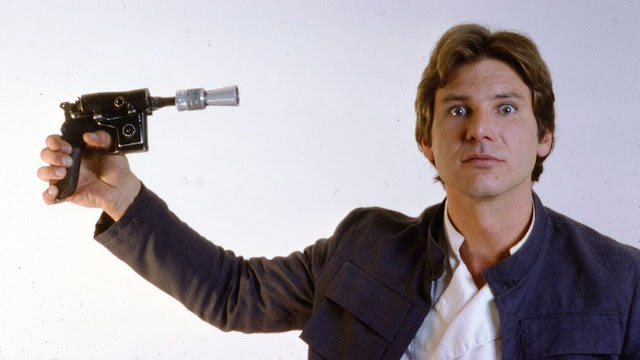 With Alden Ehrenreich confirmed this weekend at Star Wars Celebration to be playing the role of Han Solo in Phil Lord and Chris Millers spin-off Han Solo motion picture, one big piece of the massive puzzle that is this Han Solo movie has fallen into place. Plenty of names in the cast will be announced prior to the movies January 2017 start date (can we get Nate Parker or Michael B. Jordan as Lando Calrissian please?) as will big filming locations, but for now, the movie is shrouded in secrecy. But because this is the internet, an aimless land filled with speculation and Star Wars related content, I've decided to compile four helpful tips that writers Phil Lord and Chris Miller should keep in mind as they make the Han Solo movie. I'm sure this extremely accomplished writer/director duo that has experienced endless success in the past decade would love to hear advice on filmmaking from a nerdy 20-year-old Texan.

1. Don't Explain Everything About Han Solo!
Han Solo is many things. In the original trilogy, he was the rogue scoundrel, a contrast to the more proper demeanor of Princess Leia and the stoic nature of Luke Skywalker. In Star Wars: The Force Awakens, he had matured into a wiser man filled with regret. He's one of the most iconic figures in the history of movies and it's easy to see why Disney/LucasFilm love the idea of a prequel movie surrounding his earlier adventures. It's practically printing money, though that phrase applies to pretty much any Star Wars movie. However, I implore this movie not to go digging into every facet of Han Solo's life in order to fill up the story of a spin-off Han Solo movie.

That level of mystique surrounding Han Solo is what makes him so compelling when Luke and Obi-Wan find him in the Mos Eisley Cantina. Would such an air of mystery be benefited by knowing that Han Solo got his jacket from his dying dad whose last words to his son were "Always fly solo" or something else like that? Would seeing Han do the Kessel Run in less than 12 parsecs really accomplish much beyond giving general moviegoers a momentary thrill of "I REMEMBER THAT FROM THAT OLDER MOVIE!!!" Fan-service gets you only so far, y'know and if the Han Solo movie is just a barrage of references to off-hand lines of dialogue Han dropped in the original trilogy, it could become quite aggravating quite quickly.

2. Embrace The Criminal Side Of The Star Wars Universe!
In the seven live-action Star Wars movies that have been released thus far, the focus has been on Jedi's, with Rogue One pushing the franchise into new storytelling terrain by focusing on non-Force Sensitive soldiers in combat. Why not have this Han Solo go even further from the conventional focus of the Star Wars movies by primarily centering itself on the criminal underbelly of this galaxy far far away? After all, Han Solo is a smuggler and I'm sure not everyone who hires his services is a perfect saint. There could be some really compelling characters to discover in this side of this universe that could truly be unlike anything else we've seen in the series thus far. And hey, if it opens the door for notorious bounty hunter Cad Bane to show up, well, all the better!

3. Alden Ehrenreich Is A Good Actor, Utilize That!
Alden Ehrenreich has been consistently acting for a few years now, but he got on my radar with Hail, Caesar! and I know I'm not alone in that sentiment. He gave a strong performance which was full of  Southern-accented eagerness and the idea of him hitting the big time with this Han Solo movie feels me with glee. But I can't help but wonder if he'll be neutered in by far his highest-profile performance yet. Will he be allowed to shine and show off the various acting traits that make him special in favor of him just doing an impression of Harrison Fords turn as Han Solo? Not to say he can't take some cues from Ford's fantastic performance as the character, I'm just gravely concerned Ehrenreich won't be allowed to make the beloved character his own if the production is too in love with just paying home to the past.

4. Phil Lord And Chris Miller, Find The Deeper Meaning Behind The Project!
They've taken simple children's books, 1980's TV shows and toys that shouldn't work as movies and turn them into major creative success. The road that is the career of Phil Lord and Chris Miller is paved with concepts that sound like they shouldn't work, but somehow manage to find themselves. That's notably because (especially in the case of The LEGO Movie) the duo manage to find some kind of deeper substance that shows why it was worth embarking on this seemingly foolhardy movie in the first place. A prequel centered entirely on Han Solo sounds worrisome to say the least, but these two certainly have shown in the past that they're no strangers to taking dubious plotlines and turning them into promising movies. Hopefully there's some deeper meaning or theme in their idea for the Han Solo movie that could prove why such a movie exists. And if not, could it at least be as fun as their 21 Jump Street movies? And like I said, don't waste Alden Ehrenreich!
Posted by Douglas Laman (NerdInTheBasement) at 4:25 PM