Everybody Wants Some!! Is A Joyride Through The 80's Steered By Richard Linklater 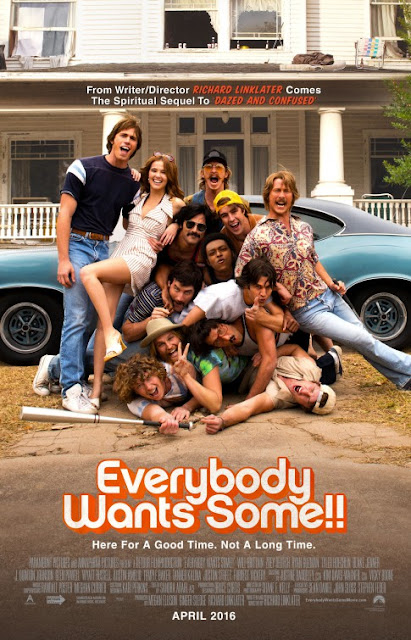 Richard Linklater is absolutely in the zone with Everybody Wants Some!!, his newest directorial effort that has him setting his sights on the culture of the 1980's in the same way he thoroughly examined the 1970's in his landmark motion picture Dazed & Confused. And just like that 1993 film, human beings bouncing off each other in an academic environment is the name of the game, though in Everybody Wants Some!! the environment has shifted from the high school domicile of Dazed & Confused to college, specifically the weekend before one freshman's first college classes (and by default, a new chapter of his life) begins.


The freshman in question is Jake (Blake Jenner), a kid whose coming into the world of college in 198- and learning the social rules (i.e. which hang-out locations are best) on the fly. While the story primarily focuses on Jake as he parties and gets to know his fraternity brothers over the weekend prior to classes start, again, like Dazed & Confused, this is an ensemble piece and there are plenty of individuals for both the audience and Jake to get accustomed to. All of your typical college movie archetypes crop up in this environment (the stoner, the intellectual, the deeply southern one who prances around in a cowboy hat), but the genius of Richard Linklater's script is to give each of these characters dialogue and personality that makes them feel all too real. They transcend their very nature of being stereotypes and instead become the types of human beings that inspired such archetypes in well-known college movies in the first place.

It doesn't hurt that there's a killer roster of young actors onboard to play these characters, including Blake Jenner as the lead. I'm absolutely shocked this guy hasn't gotten more high-profile roles since this film's release (albeit that was just four months ago but still) since he's quite exceptional here. Jenner has a solid screen presence and is able to play his characters calmer, more everyman type personality in a way that never comes off as bland but allows him to be the calm eye in the hurricane of testosterone that is this fraternity.

Richard Linklater packs a lot of events into this weekend prior to classes and much of what he packs in here is various pieces of art that allow for a showcase of the wide variety of culture that existed in the 1980's. The burgeoning punk rock scene gets glimpsed at in one extended sequence while psychedelic imagery that marked the 1970's (complete with people dressing up as Lewis Caroll characters) also gets to have one last gasp in the first year of this new decade at a party for art students. Costume designer Kari Perkins also excels in these party sequences particularly since there's a large sum of fun outfits being worn for specific environments (What you wear to a punk rock concert is quite different from what you'd wear to a hoedown, for instance)  by the students and Perkins carries a keen understanding of 1980's attire for the rest of the motion pictures wardrobe as well

Kari Perkins isn't the only one also fun to see Linklater and Shane F. Kelly flourish as a director and cinematographer, respectively, in depicting the various visual facets of these cultures that give a more thorough perspective to the 1980's as a culture. But above all else, taking various detours into different slices of 1980's art also allows for tons of fun, which is a great way to describe Everybody Wants Some!! as a whole. Richard Linklater just really wants you, the viewer, to enjoy this epoch of American culture as much as he did and, yeah, considering how enjoyable this movie is, I can't say I blame him for wanting to spread the spirit of this specific age.

Speaking of 1980's culture, plenty of tunes from this era also pop up on the soundtrack, with Linklater's love for period era tunes that were present in Dazed And Confused coming in mightily handy here. Describing the various ways Linklater pays homage to the 1980's may make this whole movie sound like the very definition of excess, but that's the funny thing, Richard Linklater is a strong enough writer when it comes to characters that all of these lovely little period era touches are there to support the characters. The dynamic between the various fraternity members, that's the beating heart & soul of Everybody Wants Some!!, the obeisance Linklater pays to this particular decade is just icing on the super delicious sundae that is Everybody Wants Some!!
Posted by Douglas Laman (NerdInTheBasement) at 9:54 AM