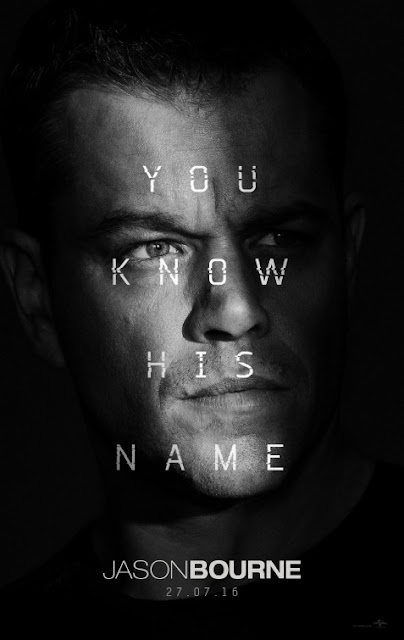 I am more than aware that Matt Damon has made more money in his career than I could ever dream of. The guy's rich and even a hefty multi-million dollar paycheck likely would only be a drop in the bucket for him. That having been said, his participation in Jason Bourne feels like the ultimate "paycheck" role, since there's really nothing in the script that I could imagine garnering his interest. But tt least Mr. Damon got a hefty check out of this project that he could put to use buying up another zoo. All I got out of watching Jason Bourne was intense boredom.

Moving on from that sick burn, let's look at the story of the first Jason Bourne adventure in nine years. Jason Bourne (Matt Damon) has been in hiding for years, until he learns that the C.I.A. has some crucial information about Jason's father that they're trying to keep under wraps. The director of the C.I.A., Robert Dewey (Tommy Lee Jones), wants to keep everything on the hush-hush, so, with the help of Heather Lee (Alicia Vikander) and an agent named Asset (Vincent Cassel, who likes an awful lot like a young Peter Cipaldi to me), he tries to take Jason Bourne down. There's also a character named Aaron Kalloor (Riz Ahmed), whose blatantly patterned after Steve Jobs to an unintentionally humorous degree, that Dewey would like to keep quiet at all costs.

As one scene of plodding dialogue pivots into the next, it becomes fairly obvious that Jason Bourne really has no reason to exist beyond just giving Universal another chance to mine the Bourne brand name for more cash. Look no further for proof of the lack of vigor in this movie's story than in the dire lack of interesting things for Jason Bourne to do. It appears that Matt Damon is channeling Ryan Gosling in Drive in his performance here that sparingly utilizes dialogue, but his various efforts to come across as stoic and menacing just come across in execution like he's sleep-walking through the part. Judging from his performance here, nobody is more done with this character than Matt Damon himself.

Tommy Lee Jones is similarly subpar in his performance here, not even getting to embrace the humorously crotchety persona that has marked many of his best roles. Instead, he's just a generic bad guy who seems overly derivative of past foes in the franchise. Alice Vikander similarly seems out of it in her work here, a real waste of one of 2015's most notable acting discoveries. But none of these actors middling performances are nearly as lazy as the movies attempts to probe deeper themes, which the gratuitously somber tone of the feature indicates we, the audience, are supposed to take as seriously as possible. The timely topic Jason Bourne wants to cover is the importance of privacy and how modern day technology and surveillance equipment can lead to shady ideas on what "security" is.

That, in theory, could work as a way to get the Bourne franchise back on the ground. After all, when the last Matt Damon headlined Bourne adventure came out, the iPhone was only a little more than a month old. So much has changed in the nine years since then in terms of technology and security and since past movies have heavily utilized shady government figures anyway, this could be a solid place to bring up the topic in a thoughtful manner. But Jason Bourne never does a thing with this concept. It seems to think mentioning Edward Snowden on two different occasions is more than enough to imbue the entire motion picture with some felicitous substance. But since this theme doesn't really factor into the plot or characters at all, it all just forms into a wasted opportunity.

And then there's the action, which I guess should be the point of a spy-based summer blockbuster. There's not a ton of fighting to speak of and whenever a moment for some violence arises, the camera refuses to sit still for even a second, rendering the majority of the action frequently incoherent. It doesn't help that editor Saar Klein refuses to linger on any given shot in these extended action sequences for more than two or three seconds, meaning the combination of the jumbled directing and rapid-fire editing make scenes intended to be engrossing and blood-pumping visually incomprehensible. Yet another way that Jason Bourne drops the ball on a feature of its production that could have been exciting yet ends up being simply tedious.
Posted by Douglas Laman (NerdInTheBasement) at 1:15 PM