MY GOD! It's Jason Bourne! He's Just Taken Over The Box Office! And Bad Moms Did Great Business Too! 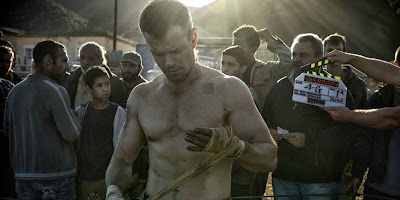 After nine years off the grid, Jason Bourne returned to movie theaters with great results, grossing $60.2 million in its opening weekend. That's about 12% below the opening weekend of The Bourne Ultimatum, but above the bows of all four of the other Bourne films. It's also the second-biggest opening weekend ever for Matt Damon and third biggest live-action opening weekend for a movie thus summer just behind Captain America: Civil War and X-Men: Apocalypse.

Frankly, the nearly decade-long gap between Matt Damon-led Bourne installments could have created enough demand to create a potentially much larger opening weekend, especially coming off of Matt Damon's biggest non-Bourne movie ever, The Martian. But the marketing by Universal took an approach that not only started late (after an ad during the Super Bowl, an official trailer didn't drop for nearly three months) but also just basically announced that "Bourne is back" without giving any new plot details or setting up a notable new threat. The fact that Jason Bourne was basically able to perform to similar levels to Ultimatum despite mixed reviews and a more "going-through-the-motions" marketing campaign speaks wonder to how beloved these Bourne movies are. It'll be interesting to see where Jason Bourne goes in the weeks ahead, since Suicide Squad will take a bite out of its business next weekend but the lack of action movie competition for the rest of August could let it stick around a while.

Star Trek Beyond took a tumble in its second frame, grossing $24 million for a 59% dip that was much larger than the second-weekend drops experienced by its predecessors. Considering Star Trek Beyond has grossed $105 million in ten days, it now looks like its heading for a domestic gross in the vicinity of $155-165 million. Considering its doing not so good business internationally (it may struggle to gross $200 million overseas) and the movies $185 million budget, Star Trek Beyond could be a minor box office misfire.

In third place was Bad Moms, which grossed a solid $23.4 million. Bad Moms was notably more front-loaded than recent summertime comedies like Central Intelligence or Trainwreck, but this is still a strong debut especially considering the film's minor $20 million budget. It's also good news for mini-major movie studio STX Entertainment, who are just coming off of back-to-back box office duds Hardcore Henry and Free State Of Jones and desperately needed a hit. Luckily, they got one in Bad Moms, which has already surpassed all but two of the movies in the studios library in just three days. Considering August only has one major comedy (Sausage Party) waiting in the wings, Bad Moms could linger in the marketplace for awhile.

The Secret Life Of Pets continues to chug along, dipping only 38% this frame and grossing another $18.2 million for a domestic total of $296.1 million. It should surpass $300 million sometime this week and looks like it'll out-gross Minions in its domestic run. Majorly impressive stuff. Roudning out the top five was Lights Out, which held quite well for a horror movie, grossing another $10.8 million for only a 50% decline. That's only slightly larger than the 47% drop experienced by the first Conjuring movie three years ago. Lights Out has now grossed $42.8 million on a $4.9 million budget. Call me crazy, but I think this movie's gonna end up being profitable.

In sixth place was Ice Age: Collision Course, which couldn't save face after a dismal opening weekend and lost 51% in its second weekend to gross another $10.5 million. This new Ice Age movie has now grossed only $42 million in ten days or $4 million less than what the last Ice Age movie grossed in its opening weekend. Right behind Ice Age was Ghostbusters, which had another sharp drop of 53% for a third-weekend cume of $9.8 million. It's fairly apparent that Ghostbusters isn't holding nearly as well as Paul Feig's last few movies and considering it isn't doing so hot internationally right now (though it hasn't opened in a number of key foreign territories yet), it appears that Ghostbusters might be heading towards some financial trouble as it sets sail for a domestic cume in the range of $125-135 million.

Newcomer Nerve managed to perform decently in its opening weekend, likely buoyed by the fact that it was one of the few movies in the marketplace explicitly aimed at teenage moviegoers. Grossing $9 million over the three-day weekend, Nerve has now grossed $15 million in five days, a solid haul for something that I can't imagine cost that much to make. Imagine if this small-scale thriller manages to out-gross Lionsgate's massive tentpole dud Gods Of Egypt from earlier this year.

Finding Dory continues to perform swimmingly, adding $4.2 million (a 42% drop from last weekend) to its gross that now stands at a massive $469 million. The Legend Of Tarzan, meanwhile, rounded out the top ten by plummeting 63% for only $2.4 million. This David Yates movie has now grossed $121.8 million and will likely finish its domestic run just under $130 million. Hillary's America spent its second weekend just outside the top ten, losing 40% to gross another $2.3 million and bringing its domestic cume to $8.6 million. That's a bigger second weekend in wide release dip than the ones experienced by Dinesh D'Souza's last two documentaries, but the films gross still puts it heads and shoulders above most political documentaries. In fact, Hillary's America is far and way the biggest documentary (political or otherwise) of the year thus far.

Cafe Society expanded to 565 locations (just 35 theaters shy of entering wide release) in its third weekend of release and fared nicely, grossing $2.2 million for a per-theater average of $3,982. That's actually a slightly better per-theater average than the one seen by the 2012 Woody Allen effort To Rome With Love in its third weekend. Cafe Society has now grossed $3.9 million and it's likely that Cafe Society will add more theaters next weekend and could even play throughout August if it manages to hold nicely. Captain Fantastic also significantly increased its theater count to less successful results, going into 550 theaters and grossing $1 million for a per-theater average of $1,834. Captain Fantastic has now grossed $2.4 million.

Also worth noting is that two notable Summer 2016 titles concluded their domestic runs this past Thursday. One of them was Free State Of Jones, which ended up grossing only $20.8 million in its five-week run at the domestic box office. That makes the movie one of Matthew McConaughey's lowest-grossing movies ever and even puts it beneath the $21.5 million gross of Mud, which, at its peak, was in 1,900 less theaters than Free State Of Jones. Also closing was X-Men: Apocalypse, which ended up grossing only $155.4 million in its underwhelming domestic performance. That's 34% below the domestic cume of X-Men: Days Of Future Past and even $2 million below the domestic gross of the first X-Men movie from sixteen years ago. This summer's box office has been so weak though that X-Men: Apocalypse is currently still the fourth biggest movie of the summer.

The top 12 this weekend grossed $176.9 million, up 27% from the same weekend last year when Mission: Impossible- Rogue Nation ruled the box office. It's also the biggest 31st weekend of any given year in history.
Posted by Douglas Laman (NerdInTheBasement) at 11:34 AM