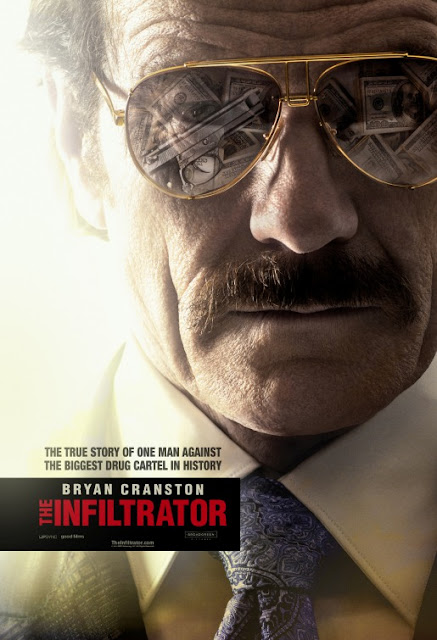 Is Bryan Cranston just choosing his roles now depending on how much deceit his characters must exude? After playing Walter White for five excellent seasons on Breaking Bad, he's played Dalton Trumbo, a man who wrote screenplays in secret, and now, in his newest motion picture The Infiltrator, Cranston plays Robert Mazur, a man who regularly does undercover work (see where the deceit comes into play in this past?) for the U.S. Government. After a mission leaves him with a particularly nasty injury, he has the chance to retire...but he can't give up the chance to partake in a new mission that could take down tons of high-profile figures in the world of drug trafficking.

Mazur plays the role of a money launderer who can help keep the cash of these druglords discreet, but in order to get the job, he's gonna have to get close to the various individuals in the drug trade. As he gets deeper and deeper into this line of work, not to mention closer and closer to certain shady human beings like Robert Alcaino (Benjamin Bratt), he must ask himself, is he getting in too deep? Is he sacrificing his own identity in order to keep this undercover one alive? And can he really pull this major mission off?

For being a drama set in the world of drug-fueled crime, there's a weird shortage of actual suspense or uncertainty in The Infiltrator. Despite taking place in the 1980's, an age of excess and unpredictability, the plot leans heavily on predictability. Robert Mazur is a guy whose very experienced in his line of work of being an undercover narcotics officer, but that's kind of the problem, he's a little too experienced, he's never out of his depth save for one brief scene where he's taken to a mysterious location and watches another guy get shot. Otherwise though, he always finds a way to win over his clients, he never slips up in terms of keeping his dual identities from bumping into each other, he just always know what to do.

And frankly, his top-notch skills aren't like the stoic nature of, say, John Wick or Captain America where those two are cool in their never-fail resourcefulness and/or symbolize deeper themes. There's really not a lot going on underneath the surface of Robert Mazur, he doesn't have a distinct personality to make note of nor does he have friends he can entertainingly bounce off of. There's really nothing here for the audience to chew on when it comes to our lead character. Cranston can play the whole "I'm-leading-a-double-life-that-could-have-deadly-consequences" thing in his sleep at this point and it feels like a major waste of his considerable talents for him to play a character so tediously one-note.

Brad Furman sits in the director's chair on this one, returning to the world of crime thrillers that served him well on the solid 2011 feature The Lincoln Lawyer (which, hey, also featured Bryan Cranston!). For some reason, the best visual trick his movie can pull off is seeping every frame (sans sequences set in Paris, France which are soaked in the color blue) in this yellow tint that's supposed to visually evoke the 1980's time period but just ends up being gratuitous. There's also one worm's-eye-view shot of a woman swimming, as the sun's rays peak around her body and Bryan Cranston murmurs dialogue in a voice-over, that seems to be visually channeling Terrence Malick for some reason. Maybe Furman was as bored as I was during this movie and just wanted to see if he could sneak in something visually unorthodox into the movie.

The Infiltrator is a motion picture in dire need of something, anything really, to liven itself up. It's barely got a pulse to it thanks to a dire lack of interesting characters, plot details or performances. It seems like everyone is just showing up and doing the bare minimum amount of work to get by. Unless you're really in the mood to watch Bryan Cranston slam a waiter's face into an Anniversary cake (which seems like a really bad idea to do if you're undercover and don't want to draw attention to yourself), I'd say skip this one and watch Cranston do far superior work as an actor on Breaking Bad. Have you ever heard of that show? It's not very well-known, I know, but it's super excellent!
Posted by Douglas Laman (NerdInTheBasement) at 11:59 AM