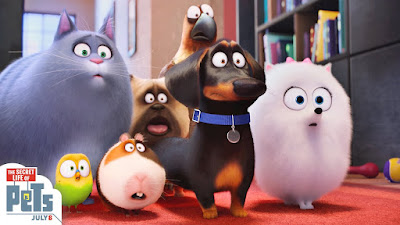 Looks like Minions aren't the only thing Illumination Entertainment can spin into gold, as evidenced by the opening weekend of The Secret Life Of Pets, which grossed a massive $103 million this weekend. That's the biggest opening weekend ever for an original film (i.e. one that's neither a sequel nor an adaptation of a previously existing property) as well as the first time an original film has ever grossed $100 million in its opening weekend. It's also only the sixth animated movie ever to gross over $100 million in its opening weekend. On a $75 million budget, it's pretty clear that this is a runaway hit for Universal and Illumination.

It's not a shocker that this one became a financial home run, considering both how prevalent and effective the marketing was. Not only did Universal plaster trailers and posters all over the country in the past year (there were at least five different trailers for this movie, including one Christmas themed trailer and one specifically centering around Kevin Hart's character that only played on Ride Along 2), but all of the marketing materials played on the love people have for their pets. Plus, they utilized social media heavily in their marketing, a move that helped Minions last year flourish.

Now the question becomes how well Pets will hold in the weeks ahead. Family movies tend to hold well during the summer weekdays, and considering the level of positive word-of-mouth surrounding the project, don't be shocked if this one becomes the seventh movie of 2016 to hit $300 million domestically. Something else worth noting in regards to the 2016 box office as a whole; thanks to The Secret Life Of Pets, each month this year except for January has had at least one movie gross $100 million in its opening weekend. That trend will likely continue into August with Suicide Squad.


In second place was The Legend Of Tarzan, which continued to be a minor surprise at the domestic box office, losing only 46% in its second frame to gross another $20.6 million for a 10 day total of $81.4 million. Looks like Tarzan will end up having a domestic total between $120-130 million. Could this make it one of the ten biggest movies at the box office this summer? Surprisingly, maybe. This one’s still got a loooong way to go before it’s profitable, but there’s no denying it’s doing considerably better than expected.

The box office champion of the past three week, Finding Dory, got hit by The Secret Life Of Pets this weekend,  slipping to third place with a 51% dip and a fourth weekend haul of $20.3 million. Dory has now grossed $422.5 million and is the biggest PIXAR release of all-time. It should overtake the $441 million gross of Shrek 2 to become the biggest animated movie ever domestically, without taking inflation into account, by next weekend.

Mike And Dave Need Wedding Dates grossed $16.6 million in its opening weekend, not an awful haul considering its smaller budget but also far from the largest opening weekends experienced by stars Zac Efron and Anna Kendrick. For Efron, it’s a bigger opening than Dirty Grandpa, but beneath both Neighbors movies. With Neighbors in May 2014, Efron seemed to finally hit gold in his career as a theatrical film leading man that had been scatter shot with hits (17 Again and The Lucky One) and misses (New Year’s Eve and Charlie St. Cloud). Thus, he singed on for a number of R-rated comedies like Dirty Grandpa, Neighbors 2 and now Mike And Dave Need Wedding Dates (he’s also got James Franco’s movie about the making of The Room, entitled The Masterpiece, and a film adaptation of Baywatch lined up for next year).

While the first Neighbors certainly got a boost from its appealing easy-to-explain premise and the novelty of seeing Troy Bolton drop F-bombs and engage in other R-rated antics (I’m sure his abs didn’t hurt either). But that novelty wore off super fast, especially since the projects he chose just came off as derivative in their marketing. Dirty Grandpa looked like a slightly more foul-mouthed Last Vegas, Neighbors  2 came off as just the first movie but with a sorority and now Mike & Dave’s marketing felt all too reminiscent of any number of wedding-themed comedies in the past few years. Without all that much conflict or notable gags to ride on, the marketing was left trying sell itself mainly on the appeal of its four lead actors, which wasn’t enough to save the day. We shall see if Zac Efron gets a much needed career rebound when working with major A-listers like Dwayne Johnson and Hugh Jackman (the latter in a musical drama) next year.

The Purge: Election Year rounded out the top five, grossing $11.7 million, a 63% decline from last weekend that gives it a $58.1 million 10-day total. That’s ahead of both other Purge movies through the same point and it should surpass the $64 million domestic haul of the first Purge movie by Friday. Look for this micro-budgeted adventure to end its domestic run between $80-85 million. Central Intelligence continued to be a noteworthy bright spot at the box office, becoming the only movie in the top 12 this weekend to lose under 40% from last weekend. Dipping only 35%, the Kevin Hart/Dwayne Johnson comedy took in another $8.1 million for a total domestic gross of $108.3 million. Looks like this one has a solid shot at out grossing the $134.9 million cume of Kevin Hart’s biggest movie as a leading man, Ride Along. Impressive stuff.

Independence Day: Resurgence continued to chug along, grossing another $7.7 million, a 54% decline from last weekend. ID4: Resurgence has now made $91.4 million in 17 days and should just get over $110 million in its meager domestic run. The BFG collapsed 59% in its second weekend of release, grossing only $7.6 million. That’s a surprisingly steep drop for a family movie, which one can attribute to competition from The Secret Life Of Pets and more muted word-of-mouth. The BFG has now grossed only $38.7 million in 10 days and will likely end its domestic run between $55-60 million. The Shallows continued to perform swimmingly, grossing another $4.8 million (a 45% decline from last weekend), for a current domestic total of $45.8 million.

Sultan rounded out the top ten, the Bollywood motion picture grossing $2.2 million at 283 theaters for a per-theater average of $7,832. Not too shabby of an opening at all and more evidence that actor Salman Khan has a noteworthy following, even outside of his home country. Our Kind Of Traitor added 26 theaters in its second weekend release and grossed another $731,916 (for a per-theater average of $1,834) and has now grossed $2.2 million in ten days. Swiss Army Man, meanwhile, had a hefty drop this go-around, losing 51% for a second weekend gross of $690,600 and has now grossed $3.1 million.

Allow me to take a moment to applaud the box office performance of The Lobster, a small scale release from A24 that grossed $309,172 this past weekend. It’s been out since May 13th and has been quietly become a steady arthouse performance over the past few weeks. It’s been losing a number of theaters over the past few weeks yet has never lost over 39% over the past few weeks of its release. To boot, its per-theater average has steadily increased over the past few weeks too, going from $1,764 in its fifth week of release to $2,534 this past weekend, its ninth week of release. The Lobster has now managed to gross $8 million in the U.S., and if it doesn’t collapse in the next few weeks, it has a strong shot at overcoming the domestic cumes of far more high-profile 2016 releases like Ratchet & Clank (which grossed $8.8 million) and Hardcore Henry ($9.2 million), both of which got released in over 2,800 theaters versus The Lobster which was in 560 locations at the peak of its release. Actually pretty impressive stuff, which can be attributed to the lack of major arthouse release breaking out in the past two months and its brazenly unconventional nature nicely clashing with more rudimentary high-profile releases clogging up multiplexes this summer.

In terms of newer fare that opened in limited release this weekend, Cold War 2 grossed $165,500 at 22 locations for a per-theater average of $7,523. And the Viggo Mortenson drama Captain Fantastic from Bleecker Street bowed to $98,451 at locations for a per-theater average of $24,613. Apparently, the studio plans to have the film out in wide release on July 29th, though its numbers in the weekends to come will determine how wide it goes.

The Top 12 grossed $206 million this weekend, about on par with the same weekend last year (which was actually the first weekend covered in this column by yours truly. Hard to believe it’s been a year, huh?) when fellow Illumination Entertainment release Minions ruled the box office. This weekend is also the third biggest second weekend of July of all-time, an impressive feat.
Posted by Douglas Laman (NerdInTheBasement) at 8:26 AM