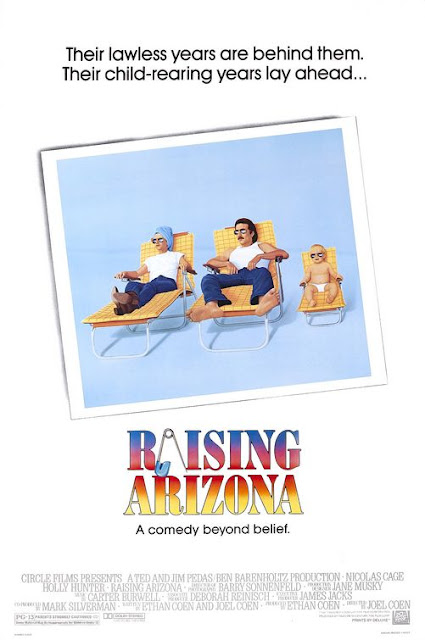 Sometimes, diving into the early parts of a well-known filmmakers catalog reveals movies far different from later efforts. Perhaps themes explored in a director's early work contrast with ideas presented in said director's newer pieces of cinema. For the Coen Brothers, Raising Arizona (their second feature film effort ever) certainly fits snuggly into their body of work. Oh sure, the duo would certainly go on to investigate heftier themes and concepts in far darker modern-day classics like No Country For Old Men and A Serious Man.

But plenty of elements associated with this duo do are very much present in Raising Arizona. The setting of this tale is the south (specifically, Arizona), a location the directing duo would return to for True Grit and O Brother, Where Are Thou? while cast members such as John Goodman and Frances McDormand (who frequently show up in the Coen Brothers work) appear here in a notable capacity. As for the story itself, it concerns an ex-convict, H.I. McDunnough (Nicolas Cage), and an officer of the law, Edwina McDunnough (Holly Hunter), getting married and wanting to start a family together. Unfortunately, Edwina is unable to have children, tossing the two of them (but especially Edwina) into a deep depression.

So of course, when a local well-known couple gives birth to five children, the duo decided to nab one of the babies (a baby boy named Nathan Jr.) and raise him as their own. Things get complicated when two criminals that H.I. is familiar with (one of which is played by John Goodman) break out of prison and stay a while with the McDunnough's. And then, naturally, there's a musclebound Harley-riding bounty hunter on the hunt for both the escaped convicts and the missing baby. As you can see, there's lots to unpack plot-wise here. Hel, the opening scene of the movie, with H.I. detailing his numerous run-ins with the law, his initial courtship of Edwina, their marriage, their struggle to have children, that could have all been a movie on its own and yet that all transpires before the title of the movie even comes up.

It's a testament to the talents of the Coen Brothers then that not only does the movie not feel overstuffed, it actually flows quite smoothly. Setting the movie in a very heightened but believable Southern location may be one reason why Raising Arizona is able to utilize both very real character-based emotions and certain elements that are very much stylized. I'm a life-long resident of Texas and I can speak with authority that the "Yee-Haw"-esque dialect spoken by the various Southern denizens is something that's very true-to-life, despite it being such a heightened way of speaking. By virtue of this movie taking place in a Southern state, you're gonna have various characters speaking in a stylized manner, so why not also incorporate other over-the-top facets into the movie like an extended chase scene with H.I. that includes a belligerent convenience store clerk, cops and an army of canines?

Nicolas Cage is an actor in dire need of a comeback because, frankly, the dude's incredibly talented and the world is being deprived the chance to see great performances from him when he's only offered B-grade schlock. While Cage and the Coen Brothers had their differences on the set of Raising Arizona, his performance here makes me wish fervently that he'd reunite with this duo since he's quite good in his performance as H.I., a criminal barely holding together under the strain of adult responsibilities.

Similarly, Holly Hunter is a fireball of tenacity as Edwina, even if she fades into the background too much for my liking in the second half of the movie as the focus begins to shift solely onto H.I. and his struggles to keep his new family afloat. It's worth noting that, even this early on in their career, the Coen Brothers (though only Joel Coen gets credited due to some oddball Directors Guild rules) are sharp as a tack as directors and writers, especially when it comes to executing the comic timing of the various gags in the movie. Sure, I'd say Raising Arizona lacks the big belly-laughs of the best Coen Brothers comedies (I'd easily rank Burn After Reading as one of their best movies, period), but it's a most entertaining effort that demonstrates quite well the sort of proficiency as filmmaking this well-known duo had at only their second motion picture.
Posted by Douglas Laman (NerdInTheBasement) at 8:12 PM