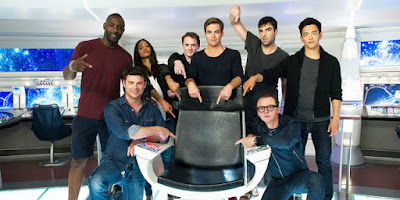 This weekend saw the thirteenth Star Trek movie in 37 years, Star Trek Beyond, debut, an occasion that coincided with the overall 50th anniversary of the franchise. To wit, Star Trek Beyond launched with $59.6 million, a bow well below its two most recent predecessors (and that's not even taking inflation into account) but still a solid start given the more divisive reputation of the last Star Trek movie as well as the more skeptical responses early marketing materials (like the teaser trailer that I personally had no problem with but many took as nothing short of sacrilege).

The bad news for Star Trek Beyond is that the next two weeks bring two major summer blockbusters (Jason Bourne and Suicide Squad) that will cut directly into its business. The good news is that summer blockbusters that open in late July tend to hold quite well at the box office since there's usually a dearth of competition for most of August. Last year, Mission: Impossible- Rogue Nation (which hailed from Paramount Pictures, the same studio that released Star Trek Beyond) managed to do 3.55 times it opening weekend, and while that high of a multiple might be just out of reach for Star Trek Beyond, it wouldn't be shocking at all to see the crew of the Enterprise cross $180 million domestically by the end of their run. Their big problem coming up is that Star Trek isn't a big deal in many foreign territories, meaning the box office path ahead of Star Trek Beyond is a dicey one.

In second place was The Secret Life Of Pets, which continues to stick around like a champ at the domestic box office by grossing another $29.3 million, putting its domestic total at $260.7 million. Pets has now out-grossed Despicable Me at the domestic box office and will be barking past $300 million in no time. Ghostbusters, in its second weekend, dropped 53% for an additional $21.6 million. That's not a great hold (it's a far bigger second-weekend decline than any of Paul Feig's past movie), but it is better than a large share of summer blockbusters, though it's gonna be tough for the movie to hold on in the face of major upcoming movies like Jason Bourne, Bad Moms and Suicide Squad. Ghostbusters has now grossed $86.8 million in ten days and will probably end up between $130-140 million domestically.

Two more new releases rounded out the top five, and since both of them grossed over $20 million, that means we have five separate films gross over $20 million this weekend. Nice! Lights Out was the major surprise of the weekend, grossing $21.6 million at 2,818, giving it a better per-theater average ($7,665) than The Secret Life Of Pets and Ghostbusters this weekend. Chalk this one up to a distinctive marketing campaign and exceptionally strong reviews, plus associating it with James Wan, who just directed the well-received The Conjuring 2, doesn't hurt things. Looks like this is yet another low-budget movie (Lights Out only cost a tiny $4.9 million to make) to perform like gangbusters for Warner Bros. following Me Before You and Central Intelligence.

Ice Age: Collision Course rounded out the top five with $21 million, a 55% decline from the opening weekend of the last $46 million debut of the last movie. It's also a debut more in-line with the likes of Turbo and Happy Feet Two rather than the large grosses of the last four Ice Age movies. While this franchise is still piling up plenty of cash overseas, it's pretty clear Manny, Sid, Diego and Scrat are basically DOA domestically. Looks like this will be the first film from Blue Sky Studios to not cross $100 million domestically and it wouldn't be shocking if it failed to out-gross the $68 million opening weekend of Ice Age: The Meltdown in its entire domestic run.

Continuing to swim around in the domestic box office was Finding Dory, which had its smallest weekend-to-weekend decline yet, dipping 36% for a sixth weekend gross of $7.2 million, raising its domestic cume to $460 million, making it the ninth biggest movie of all-time domestically Meanwhile, The Legend Of Tarzan held solidly in the face of newcomer Star Trek Beyond, dropping only 44% for a fourth weekend gross of $6.4 million. Tarzan has now amassed $115.8 million domestically.

Hilary's America: The Secret History Of The Democratic Party expanded into 1,216 locations this weekend, entering the top ten at number nine and grossing $3.7 million for a $3,043 per theater average. That's a far better wide release debut than director Dinesh D'Souza's last movie, America: Imagine The World Without Her, though it's about 38% below the wide release bow of 2016 Obama's America from four years ago. Hillary's America is already the thirteenth biggest Political Documentary of all-time and could make a run for $10 million domestically if it doesn't plummet next week.

The Infiltrator had a solid 38% decline in its second weekend of release, but considering how abysmal its opening weekend was, that's not enough to save it at the domestic box office. The Infiltrator took in another $3.2 million for a 12 day total of $12.2 million. Kabali bowed in 236 locations to a strong $2.1 million for a per-theater average of $9,142. Meanwhile, Absolutely Fabulous: The Movie also got started in 313 theaters, grossing $1.88 million for a per-theater average of $6,006.

Cafe Society expanded into 50 theaters and grossed $875,000 for a per-theater average of $17,500. Cafe Society has now grossed $1.3 million domestically and plans to expand into nationwide release this coming weekend. Captain Fantastic also embiggened its theater count, with the Viggo Mortenson feature going into 104 theaters to the tune of $572,782 for a per-theater average of $5,508. Captain Fantastic has now grossed $1.1 million and (just like Cafe Society) plans to further expand its theater count on July 29th.

In perhaps the biggest surprise of the weekend, Don't Think Twice made quite a scene in its opening weekend, grossing $90,126 at a single Landmark theater (specifically the Landmark Sunshine Cinema( in New York City. Believe it or not, that gives it the biggest per-theater average gross of any release in 2016, displacing Cafe Society for that title. The distributor of Don't Think Twice, The Film Arcade, has never had a movie gross over $180,000 in its four years of existence, but it looks like they may have a sleeper hit on their hands here. It'll be very interesting to see where Don't Think Twice goes in the weeks ahead.

The top 12 this weekend grossed $183.3 million, a 30% increase over the same weekend last year when Ant-Man topped the box office for the second weekend in a row and Pixels bowed to underwhelming results. To boot, it's the biggest thirtieth weekend of the year of all-time, outpacing the previous champ the weekend of July 25-27, 2008, when The Dark Knight ruled over the box office in its second frame.
Posted by Douglas Laman (NerdInTheBasement) at 1:49 PM