Vice Is A Sprawling Saga of Corruption That Kind of Works (Surprisingly Well, In Fact) In Spite of Its Worst Elements 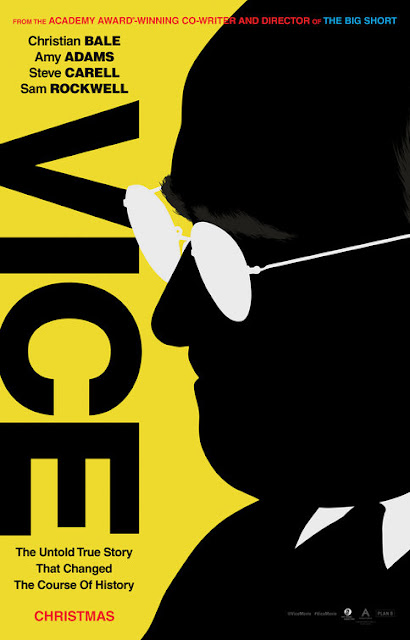 Adam McKay is mad as hell and he's not gonna take it anymore. Even when he was making ridiculous (though often highly hysterical) comedies that involved Will Ferrell and John C. Reilly licking dog turds, McKay clearly had some bitterness over how normalized powerful corruption was in America. Even a disappointingly rote Anchorman sequel managed to find time for commentary on how much 24-hour cable news is fixated on sizzle but not substance while the end credits of his comedic masterwork The Other Guys are dedicated to explaining how Ponzi schemes work. Is it any wonder then that his shift over to dramatic features with The Big Short and now Vice would tap directly into that frustration? What was subtext in his comedies is now the entire point of these more serious-minded, though frequently comedic, motion pictures that serve as McKay's most recent directorial efforts.


Going in that direction served McKay's 2015 motion picture The Big Short well as he zeroed in on a handful of normal people who managed to somehow see that the impending 2008 financial crisis was coming. For Vice, McKay has gone from The Big Short's method of focusing on numerous people across different subplots occuring in a short span of time to Vice's method of just concentrating on one person (Dick Cheney) over decades of his life. Trying to pack so much of Dick Cheney's life into one movie results in something that's extremely messy, sometimes to an alarming degree, but the ambitious nature of the production and the sublime performances that are so critical to Vice also make it usually work in spite of its worst tendencies.

After a number of awkward false starts (McKay's script can't seem to figure out how to properly begin or end this movie), Vice soon reveals that we'll be following Dick Cheney, here portrayed by Christian Bale, from his college years as a rowdy Yale dropout all the way to his time as the first U.S. Vice President in the 21st century. Through it all, Dick Cheney is a man looking for power wherever he can get it and he soon finds that the best place to get that power is in U.S. politics, specifically working his way up the ladder from lackey to Donald Rumsfeld (Steve Carell) to Congressman and then to totally upending the responsibilities of the Vice-Presidency so that he can have as much control as possible. All the while, Cheney secures power in a subtle fashion, he's not a brash public personality kind of fellow, he's someone who's able to quietly shift the chess pieces around so that other people can make the moves he wants them to make.

There's a mechanical nature to this movies version of Cheney that Christian Bale embodies beautifully in his lead performance. If you've seen any images or footage of Bale in this role, you know that he did his usual intense physical transformation to play this part but per usual for Bale, he excels in the role beyond just looking like the real guy. Bale portrays Cheney as a mechanical human being, someone so rigidly put together from top to bottom that his clenched voice never wavers whether he's talking to George W. Bush about the possibility of being his VP or having one his numerous heart attacks. One of the films most humorous moments comes from Cheney tossing one of his young daughters into the air in a robotic fashion like he's an alien trying to mimic a what he thinks playful father/daughter behavior is.

Bale is accompanied by his The Fighter/American Hustle co-lead Amy Adams here, with Adams portraying the part of Dick's wife Lynne Cheney. Though peculiarly shunted to the sidelines in the third act after being such a key part of the plot up to that point, Adams does a remarkable job making Lynne Cheney someone who could believably intimidate a quietly towering figure like Dick Cheney, she's so natural in portraying this characters chillingly ruthless nature. In supporting roles, Steve Carell does strong work in the type of subdued role that he always fares best in while Tyler Perry exudes palpable woe in a critical turn as Collin Powell and Sam Rockwell is a total riot as George W. Bush, it's eerie just how well he captures the real guy while Rockwell's comedic timing ensures that the part isn't just shallow mimicry.

The acting is the best part of Vice as is the constantly on-the-move pacing of the feature that, combined with its infectious feelings of rage against the American political machine, ensure that the proceedings are never boring. Just because they never instill tedium in a viewer doesn't mean that Vice doesn't have significant problems on a screenwriting level though. Adam McKay is in full Anchorman 2 mode with his writing here, meaning that he's thrown every idea in his head into one script and didn't bother to see if it all fit together cohesively. Vice holds together much better than Anchorman 2 but it still suffers from the overstuffed sensibilities that capsized that Will Ferrell-headlined comedy. For instance, though the omnipresent narration (done by an actor whose presence is always welcome in movies) provide some fun elements, it also has a tendency to place a barrier between the audience and the characters and the same can be said for other heightened aspects scattered throughout the motion picture.

For nearly every fun over-the-top element in Vice (like a fake-out ending or an explanation on expanded wartime powers told through the process of ordering a fancy meal), there's another expository wacky detail that I wanted to vanish so I could just watch the characters interact instead of having everything explained to me in direct voice-over. One of the best scenes in the movie shows Cheney and Bush Jr's first meeting through the perspective of Cheney as he takes in every detail in the room and on the man in front of him in order to size up this Presidential candidate-to-be intercut against footage of Cheney reeling in a fish. It's a fascinating sequence (one of numerous similarly thought-provoking scenes in the film) that, thanks to the excellent performances and clever editing, allows so much to be conveyed about the character of Cheney strictly on visual terms without the aid of intrusive stylized elements.

On a storytelling level, Vice also suffers the same flaw that many music biopics struggle with, specifically that it tries to cover so much time in the span of one man's lifetime in the course of a single feature-length movie. Cramming in so much of Dick Cheney's life into one film inevitably means some plot threads feel undercooked while others feel like they go on too long. Though the screenplay is hobbled by a number of sloppy tendencies and major structural issues, it's still an ambitious enough piece of writing with such a uniquely realized aesthetic that it's no wonder that the movie itself somehow manages to still be entertaining more often than not in spite of its worst elements.  Though clearly a step down from The Big Short and most of Adam McKay's other more consistently successful directorial efforts, Vice is like a clumsy dancer with two left feet who still puts in enough clearly detectable effort to make their heavily flawed dance routine a sight to behold. It's a super messy spectacle, but it's also a spectacle that frequently entertains with its ambition.
Posted by Douglas Laman (NerdInTheBasement) at 12:40 PM