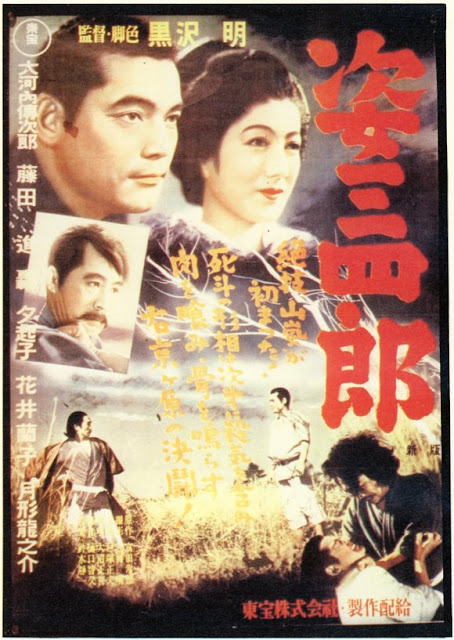 There was a time when the world of cinema didn't include director Akira Kurosawa. It's hard to even imagine, it's like picturing comic strips with Peanuts or rock n' roll music without The Beatles, but there was indeed a time period for filmmaking before Kurosawa started out his directorial career. Said career began with the motion picture Sanshiro Sugata, which was released in Japan in March 1943 (it wouldn't debut in America for three more decades in April 1974) to resounding success that paved the way for the numerous movies Kurosawa had yet to make. Many of those movies are superior to Sanshiro Sugata, but this is still a solid movie with plenty to offer beyond its historical importance.


With Sanshiro Sugata, Kurosawa, directing a script written by himself and Tomita Tsuneo, we follow the saga of the titular lead character (played by Susumu Fujita) who yearns to train to become a master of martial arts. However, Sanshiro struggles to filter his skills properly and as a result can't live up to his potential, though a night spent in the middle of a pond helps him come to an epiphany that leads him down the path of becoming a better fighter. Hopefully that epiphany has really whipped Sanshiro into shape because he's got a duel with Hansuke Murai (Takashi Shimura) coming up that could challenge him even outside of the ring.

The tale of a scrappy underdog who has to rein in his youthful cocky tendencies to defeat a rival that he eventually befriends while also navigating a potential romance makes Sanshiro Sugata a Rocky movie that existed decades before Stallone actually created the Rocky character. Granted, these are all broad plot details that have existed in storytelling long before cinema was even invented at the end of the 19th century, but it is still amusing to see a framework that still thrives in modern cinema employed in the confines of a movie straight out of the 1940s. The classics never go out of style I suppose, especially ones that were employed by Akira Kurosawa!

Sanshiro Sugata makes a good case for why the traditional inspirational sports movie still endures in present-day cinema for how well it allows the viewer to go on a personal journey with the character of Sanshiro Sugata. Through his training in the ways of martial arts, one can clearly see the ways this guy is growing as a person and that lends moments like a climactic recognition of immature youthful behavior in his rival fighter some substance. Sanshiro denied such behavior existed at the start of the story, now he's able to recognize it in both himself and others he encounters. Maybe it's a simple character arc but what's so wrong with simple when it works at moving the viewer?

The eventual friendship between Sanshiro and Hansuke Murai is another elegantly simple element in the feature that works quite well with Takashi Shimura lending his trademark sense of compelling worldliness to the part that imbues some gravitas into the duo's dynamic that makes it stand above similar rivals-turned-buddies dynamic in similar movies. Simplicity doesn't work as well with Sanshiro's love interest Sayo (Yukiko Todoroki), a character given only the barest amount of personality, I couldn't describe who she was and her own individual motivations if you asked me while pointing a gun to my head. She has some cute moments of chemistry with Fujita but their relationship feels like the weakest story element in the entire movie.

To be fair, many story details related to their romance seem to be a large part of the Sanshiro Sugata footage that's been lost to the ages, with on-screen text filling in the gaps in the narrative that the lost footage was supposed to clarify. Even with an estimated 24 minutes missing in the story, Sanshiro Sugata is still a mighty fine inspirational sports drama that's especially interesting when seeing how it serves as a precursor for Kurosawa's films that were yet to be made. The way Kurosawa shoots the various fight scenes throughout the story seems to be the greatest indicator of his style of filmmaking, there's no accompanying orchestral score, the camera is a good distance from the characters and the sound effects make you feel every bone crunch or slam to the floor. This may have been the first time Kurosawa would apply this method of depicting human beings fighting each other, but it certainly wouldn't be the last....
Posted by Douglas Laman (NerdInTheBasement) at 5:05 PM