Spider-Man: Into The Spider-Verse Is Pure Cinematic Joy 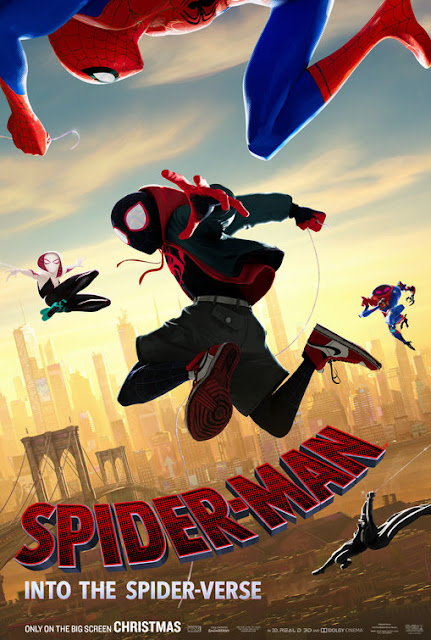 Spider-Man: Into The Spider-Verse feels like a movie just made for me. The heavy usage of hand-drawn animation, its specific style of humor that's both extremely self-referential yet avoids becoming arrogantly snarky, the various actors in its voice cast and its heartfelt attitude towards its characters, it's all just like catnip for me. No wonder then that I fell head over heels for Spider-Man: Into The Spider-Verse, a movie that allows the animation studio behind (shudder) The Emoji Movie the chance to step up their game to the next level and deliver something special both in terms of actual story and in terms of animation.


We all know the story of Peter Parker, the kid who got bit by a radioactive spider, gained superpowers and became Spider-Man. But what if he wasn't the only one Spider-hero out there? Enter Miles Morales (Shameik Moore, how wonderful to see the man who delivered such an exceptional lead performance in Dope get to headline a major superhero movie), a teenager who's already got a lot on his plate between trying to fit in at a new school and figuring out who he wants to be as a person before he gets bit by a spider and finds himself able to crawl up walls. Further complications arise when the nefarious villain Kingpin (Liev Schreiber) uses a new piece of technology to open a gateway to another dimension that unleashes a schlubby older version of Peter Parker (Jake Johnson) in addition to potentially causing catastrophic damage to the fabric of reality itself!

Looks like Miles, whose personal identity quest gets nicely wrapped into the larger superhero story, and a version of Peter Parker who really doesn't want to be a mentor to some new young Spider-Man, will have to work together alongside other Spider-heroes from other dimensions including one where the mantle is taken up by Gwen Stacy (Hailee Steinfeld). It's a story whose tone feels very much in the comedic style of Phil Lord & Chris Miller's other works as directors (both of them produce this film but only Lord wrote the screenplay). Just as the 21 Jump Street movies and The LEGO Movie were self-aware about their statuses as film adaptations of old TV shows and toys, respectively, Spider-Verse is similarly self-aware, to an even greater degree in fact, of the comic book history of its individual characters, to the point that it incorporates elements of comic books, like text boxes, into the film itself.

Many movies have tried to replicate these kinds of visual elements of comic books into cinematic form (most notably Ang Lee's admirable but messy Hulk movie) to varying degrees of success but Into The Spider-Verse fires on all cylinders with the way it makes its world look like a comic book come to life. There's so much creativity in just how on-screen text is employed alone throughout the story while the films visual aesthetic is so interesting and fun that it'll still register as compelling even if you've never read a comic book (or had any experience with the other visual styles it pays homage to) in your life. The kind of beautiful looking backgrounds or exquisite camerawork seen throughout Into The Spider-Verse is bound to wow any viewer

The phenomenal animation (brought to life by countless teams of exceptional animators) makes a great accompaniment to the vintage Lord & Miller style of humor present throughout the movie, but it's not just their fingerprints that get left on the project. Neither Phil Lord nor Chris Miller are among the trio of directors (which consist of Rodney Rothman, Bob Persichetti and Peter Ramsey) helming this feature, each of whom seems to have brought their individual talents from their prior works to the table here. Rodney Rothman is a close accomplice of Lord & Miller and knows how to help execute their style of comedy, Bob Persichetti's work on The Little Prince gives him knowledge of how to merge various animation styles together while finally, Peter Ramsey knows how to do effective animation action sequences from his work on Rise of the Guardians.

Given how complex the process of filmmaking is, I doubt their duties as a trio were divided up that evenly while making this movie, but it does feel oh so fitting for a story about vastly different superheroes working together that such an eclectic trio of filmmakers would work together so excellently in directing this movie in a fantastic example of the virtues of artistic collobaration. Speaking of distinctive talents working together beautifully, the voice cast for Into The Spider-Verse is utterly flawless, Shameik Moore effortlessly makes Miles feel like a real teenager caught in way over his head while Liev Schreiber may have just surpassed Vincent D'Onofrio as the definitive version of The Kingpin, he's incredibly menacing here.

Even Jake Johnson, a performer I've been just so-so on in the past, makes for an utterly terrific older jaded version of Peter Parker. One could spend all day praising the supporting voice performances, though my favorite may just be Nicolas Cage as Spider-Man Noir, Cage's comic timing and line delivery with this character is masterful and results in some of the films funniest moments. He's not the only character who provides memorable laughs of course, unsurprisingly for a movie that has Lord & Miller as key creative individuals, there's tons of quotable lines, great pieces of humorous animation and references to Spider-Man lore that had me cackling. It's always so wonderful to see family movies that remember that you can be witty and still be suitable for viewers under the age of five.

While it's no surprise that Into The Spider-Verse is a comedic riot, I was shocked by how emotionally poignant it was, particularly by the subplot involving Miles and his police officer father Jefferson Davis (Brian Tyree Henry in one of the films best vocal turns). It's impressive just how well this film that dedicates so much of its time to delightfully rapid-fire sequences of comedy or action can just slow down for powerful intimate scenes exploring the father/son relationship between these two characters. Those scenes and other moments that tenderly emphasize what Miles Morales is going through in his struggle to define himself make Spider-Man: Into The Spider-Verse an extremely poignant companion piece to The SpongeBob SquarePants Movie, another creatively animated ode to people who feel like they're alone in this world because of what makes them different. Comparing it to the original SpongeBob SquarePants Movie alone should be enough to let you know that Spider-Man: Into The Spider-Verse is something special, something joyous, something...amazing, even?
Posted by Douglas Laman (NerdInTheBasement) at 10:43 AM