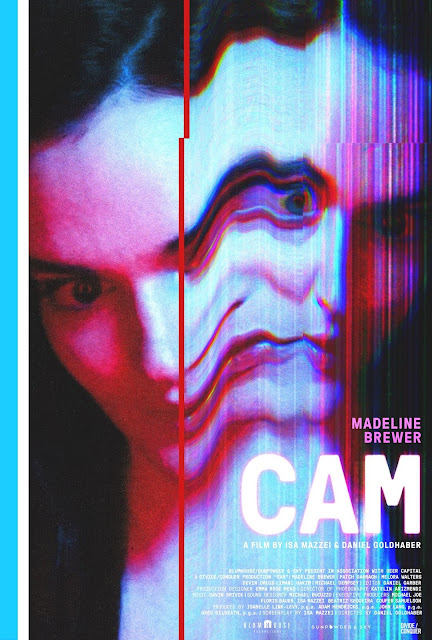 What a difference a year makes, especially when it comes to the reputation of Netflix's original movies. This time last year, we were still a few days out from Netflix's big blockbuster Bright becoming one of the worst movies of last year, a miserable end to a year that primarily saw disappointments (like War Machine or Death Note) fill up Netflix's original film line-up. Flash-forward to December 2018 and Netflix, while not impervious to disappointing movies (remember that underwhelming Jeremy Saulnier film they released?) has been putting out high-quality films on a weekly basis, films like Private Life, Roma, The Ballad of Buster Scruggs, The Other Side of the Wind and Cam.

That final film once had a much lower-profile than the other four aforementioned Netflix movies thanks to it being a super low-budget thriller whose cast & crew weren't extremely famous, but Cam has certainly made its presence known in the first month its available on Netflix, with the likes of Stephen King taking notice of just how good this movie is. Cam's premise concerns a cam girl named Alice Ackerman (Madeline Brewer) who takes pride in her work and is eager to be one of the most popular cam girls on the website that houses her shows. Considering how invested she is in her line of work, it's easy to see why she would be so devastated when she learns that not only has her account been hacked but someone is uploading live shows starring Alice Ackerman...that Alice has never appeared in.

With her entire being used online by someone else, Alice is determined to reclaim her account and her life in a story that apparently is heavily informed by the personal life of the films writer and former cam girl Isa Mazzei. Like so many great thrillers of the past, Mazzei's story works on two levels, with one of those levels being that it works simply as a well-done thriller, one that captivates your interest and knows how to keep you guessing on what might happen to the characters next. The way it cleverly uses real-life internet-based frustrations (namely how difficult it is to get help with online issues through any kind of phone helpline) to increase the tension in Alice's situation is an especially brilliant way the script makes this thriller so entertaining to watch.

But perhaps even more impressively than how well Cam works on the level of a thriller is how well it works as a feature all about the struggles a woman in Alice's line of work faces in being seen as a human being. Refreshingly, this does not come by way of showing Alice's entire career as some bottom-rung profession but rather through the different dehumanizing ways other people treat Alice. For instance, one of Alice's most frequent contacts is Tinker (Patch Darragh), a young man who serves as perfect embodiment of a "But I'm A Nice Guy"  individual, a dude who sees women as just objects that should reciprocate their romantic advances because the dudes did a certain amount of nice deeds for that woman.

Such a perspective of women that see them as just inanimate objects designed to appease male desires runs rampant in Cam even beyond the character of Tinker, including in the crux of the plot concerning someone creating new videos that somehow star Alice without her consent as well as in a hauntingly realistic scene showing two police officers dismissing any of Alice's concerns about her account being hacked solely because of the career she's in. Though this perspective may manifest in different forms, the recurring element across all these forms is that they remove the autonomy of Alice, she's always dehumanized and thought of as lesser-than, an object to be either coveted or dismissed or even both. By contrast, Alice's actual performances as her stage persona Lola rely heavily on her own desires and thoughts, including creative elements she brings to the table herself in an attempt to boost her popularity.

The humanity of its lead character is always on the mind of Cam and it makes this one a woefully rare thoughtful portrait of a sex worker in modern American cinema and it helps make the thrills in Mazzei's script all the more engaging to watch. The thrills get enhanced in their visual execution by both skillful direction courtesy of first-time-feature-film director Daniel Goldharber, frequently exceptional editing from Daniel Garber and, perhaps most of all, a terrific lead turn from Madeline Brewer who depicts her character's frustrations at the horrors she's been engulfed in in such a realistic fashion that there's no way you can't get emotionally invested in both her performance and the characters story. Netflix original movies may have gotten off to a bumpy start but the likes of Cam (which was produced by Blumhouse Productions and Gunpowder & Sky) show how far the streaming service has come, they're very much capable of releasing something truly special and truly thrilling.
Posted by Douglas Laman (NerdInTheBasement) at 2:47 PM