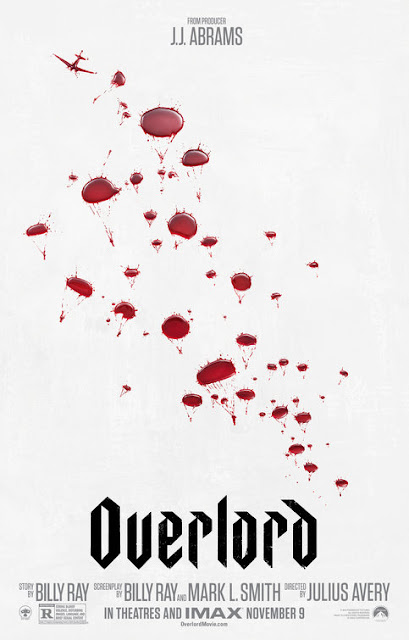 Bad Robot Productions has been stepping up their output lately to include a lot more projects that aren't just J.J. Abrams directorial efforts. What used to be a rare occurrence (a Morning Glory here, a Cloverfield there) is now making becoming an annual tradition that promises to grow in prominence in the years to come. Ramping up the amount of movies they make means it was inevitable that they'd eventually make their first R-rated film, which comes in the form of Overlord, a B-movie that keeps things simple and gory. If you're looking for a bit of gruesome counterprogramming during the holiday season movie landscape heavily populated by family movies and prestige dramas, well, you could certainly do worse than this.


Overlord is set in World War II and follows Private Ed Boyce (Jovan Adepo) as he heads off on a mission with his squadron to take down a communication tower in order to aid the men who are landing on the beaches of Normandy. As they approach their designated landing spot, the plane Boyce and his men are traveling in gets shot down, leaving Boyce and only a handful of his comrades, including stern Corporal Ford (Rupert Wyatt), alive. Trapped behind enemy lines, our heroes now have to take shelter with local resident and fierce Nazi hater Chloe (Mathilde Olivier) as they plan how to pull off the mission while evading Nazi forces.

For much of Overlord, that's our plot, it's your usual WWII action-drama about guys having to do a seemingly impossible mission while trapped behind enemy lines. But if you've seen even one commercial for Overlord, you know that's not the whole plot. As these ads show, the Nazi's that Boyce and company are hiding from are doing gruesome experiments on local townspeople in an effort to create an army of immortal soldiers. That doesn't come into play until the tail end of the second act at the earliest, but thankfully, if you're aware of this element factoring into the plot, you won't be left wondering for much of the movie where all the gruesome science experiments gone wrong are.

Overlord actually works just fine as a grounded thriller for much of its runtime, the eventual inclusion of creepy science-fiction body horror feels like an extra surprise rather than a "When are they gonna get to the fireworks factory?" type deal. Whether it's being just a standard WWII war thriller or something more nuts, Overlord isn't afraid to just be fun to watch, which accounts for a lot.  This is the kind of movie that trots out charmingly over-the-top bits of business like a Nazi's hatred of all things American is established by a Nazi soldier spitting on a young boy's baseball! That's America's sport! Those dastardly bastards!

The simple but fun nature of the project extends to the characters, who, save for the surprisingly nuanced protagonist Ed Boyce, are agreeable broad archetypes, particularly a sniper played by John Magaro, who just sinks his teeth into this heavily-accented comedic supporting performance. Overlord's tendency to just go for it means the movie also takes demented glee in realizing what kind of terrible horrors the Nazi's have concocted with their science experiments. There are so many fun possibilities teased with the kind of monstrosities the Nazi's have at their disposal that I actually wish the fine but not exceptional climax went more nuts with all the possibilities at their disposal, a standard boss fight just doesn't feel like the proper finale to a movie that's introduced so much weirdness.

At least the climax allows actor Pilou Asbaek to really chew the scenery as our big Nazi baddie. Asbaek is one of a number of solid performances in the cast, though I was especially impressed with how Jovan Adepo gives such a thoughtful human performance that could have worked like gangbusters in a notable war drama in the middle of a body horror B-movie. Adepo's the most stand-out element in a movie that's typically more satisfying than outright exceptional, but at least Overlord delivers on the blood n' guts you'd go into it desiring and it has a retro vibe that I found really charming. Plus, punching Nazi's is always fun to watch.
Posted by Douglas Laman (NerdInTheBasement) at 9:44 AM