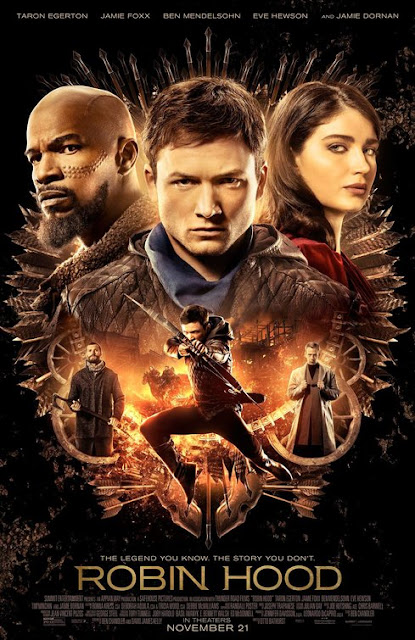 Robin Hood has been a fixture of movie theater screens for exactly 110 years now, with everyone from Percy Stow to Errol Flynn to Disney to Mel Brooks to Ridley Scott giving their own unique take on the Robin Hood mythos. The newest take on this material comes from director Otto Bathurst, making his feature film directorial debut with this project, working from a script by Ben Chandler and David James Kelly that reworks the Robin Hood mythos into something that kind of wants to make the character into a superhero but also into a grounded n' gritty individual as well as a figure of political intrigue. Why they didn't also try to make him into a screwball comedy leading man while they were at it is beyond me.


This new take on Robin Hood also gives an origin story for the character that sees him starting out as the wealthy Robin of Loxley (Taron Edgerton), who spends his days in his massive manor snuggling with his girlfriend Marion (Eve Hewson). But then he's drafted to fight into the Crusades where he witnesses all the violent horrors corrupt men are capable of and meets a rival soldier named John (Jamie Foxx). When he returns home after four years of combat, Robin discovers that he's been declared dead, his manor is in shambles and Marion has moved on with her life. Looking for a new purpose in life, John (who followed Robin to Nottingham) convinces Robin to become a hooded vigilante who can take down the wealthy and corrupt people, like the Sheriff of Nottingham (Ben Mendelsohn), who make the world such a wretched place.

Strangely enough, the plot that unfolds from here is relatively cohesive, a surprise given how many far more high-profile recent blockbusters like Venom, Justice League or Jurassic World: Fallen Kingdom have stories that just stumble from one set piece to another with no rhyme or reason. Here, the reason why John and Robin Hood managee to overcome their rivalry to form a friendship makes sense, there's a number of solid instances of plot details getting satisfying pay-off's and it's interesting to see a major American blockbuster so directly engage with how religion can be co-opted as a justification for nefarious deeds. Being borderline competent isn't the biggest compliment in the world but at least Robin Hood has that going for it, as well a surprising presence of theological commentary, in its screenplay.

Chandler and Kelly find success as writers in structuring the story of Robin Hood but they're less capable when it comes to making the characters that inhabit that story all that interesting. John really has nothing to do in the story after a training montage sees him showing Robin how to be the ideal bow-and-arrow fighter, that feels like such a waste of Jamie Foxx. Marion is only defined by the men in her life and has no personality of her own while her new romantic interest, Will Tillman (Jamie Dornan), just keeps altering his personality from scene-to-scene. At least a pair of enjoyable performance help the two most pivotal characters to overcome the scripts difficulty with writing compelling characters. The first of these performances is  Taron Edgerton who plays Robin Hood with some wily charm that's mighty fun to watch while the other noteworthy performance comes from the one and only Ben Mendelsohn.

Doing his third blockbuster movie villain turn in the span of two years (and he's still got his Australian alien baddie in Captain Marvel to go!), Mendelsohn sinks his teeth into this part, chews the scenery and then spits it out in the face of whoever is unlucky enough to cross his path. The script gives him a number of chances to just prattle off intensely delivered monologues, including one about the abuse he suffered as a boy at the hands of clergymen, that convey more than enough menacing presence to convey why Mendelsohn is the go-to actor for these kinds of roles. Mendelsohn's clearly having a lot of fun in this role and that makes his take on the Sherrif of Nottingham a most entertaining one.

While Mendelsohn's performance is exceptional, Robin Hood's action scenes are far less noteworthy. Most of them are filmed through unremarkable camerawork that lacks imagination at best and at worst is so shaky that I couldn't tell what was going on. A number of distractingly clumsy pieces of editing as well as an overuse of the gimmick popularized by Guy Ritchie's Sherlock Holmes movies of showing action beats in slow-motion before quickly speeding things up also plague the set pieces that are supposed to be crucial parts of the entire feature. For everything that Robin Hood gets right like a delightfully over-the-top villain or a more ambitious than expected story, you also have to deal with a sloppier element like these action scenes that desperately needed an extra jolt of imagination.
Posted by Douglas Laman (NerdInTheBasement) at 12:57 PM