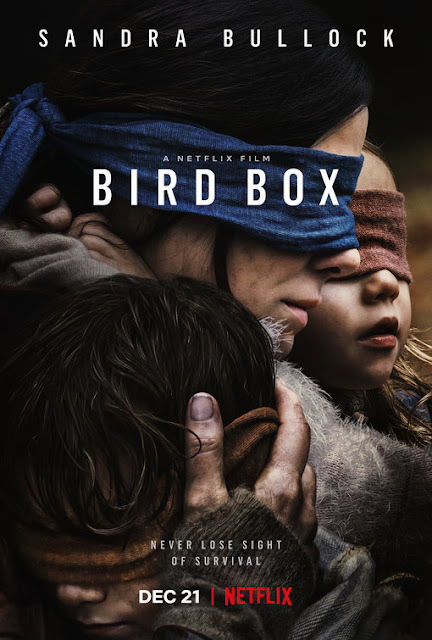 Over the course of the last few days, Bird Box has become one of the most talked-about movies of the moment, with memes (which seem to be coming from genuine real-life people despite early reports to the contrary) centered around the movie popping up everywhere and Netflix bragging about their record-breaking viewership numbers for the film. Well, I guess since the internet is now so abuzz with so much talk regarding Susanne Brier's new movie Bird Box, I suppose now is the time for me to pen down my thoughts on the motion picture, which I never could have imagined generating so much widespread conversation, for good and for ill.


Though widely described as "A Quiet Place But Now You Can't See Instead Of Can't Hear" (Bird Box's source material predates A Quiet Place, for the record), the plot of the film proper is a touch more complex than that. The story is split between two timeframes, one of which see's artist Malorie Hayes (Sandra Bullock) struggling with the idea of starting a family considering her reclusive nature. While on the way back from a routine doctor's visit, people start killing themselves in gruesome ways after looking at some kind of invisible force that's ravaging the human population. She manages to make it into a nearby house with a handful of other survivors who are all trying to figure out what's going on and how they can survive it.

The other timeframe (and the first we're introduced to) takes place five years later and see's Malorie trying to get her two kids to a safe compound by crossing a dangerous river while blindfolded. Splitting the story up in this manner is a bold decision, but writer Eric Heisserer can't quite make the darting back-and-forth between the two plotlines work, especially since the storyline involving Malorie trapped in a house with strangers tries to get so much of its tension out of instilling a sense of crushing claustrophobia as these testy strangers try to work together in such a closed-off space. That element keeps getting upended by returning to the other storyline that takes place in a wide-open outdoor environment.

It's a shame that crucial atmospheric attempt at generating thrills doesn't work because Heisserer comes up with some creative chilling scenes that truly take advantage of how suddenly these horrifying circumstances have overtaken normal suburban environments. For instance, a scene of uncertainty set in a grocery store is especially unnerving in how well Heisserer makes what previously seemed like a haven for salvation into yet another house of horrors for these characters to try to survive. Though at first the scenario seems too evocative of The Happening (nobody espouses the virtues of hot dogs here though), Bird Box's best moments, like that grocery store sequence, make it an ideal version of what that disastrous horror film could have been.

Director Susanne Brier executes the best of the thrilling sequence quite nicely and demonstrates solid work behind the camera throughout the rest of the film as well, particularly in the performances she gets out of her stacked cast. That star-studded gaggle of actors (which include Trevante Rhodes in a heavily charming turn that reinforces how this guy needs to be an A-list leading man pronto) is headlined by Sandra Bullock who brings a nicely-realized performance that lends believability to both Malorie as an introverted soul out of her depth once the apocalypse begins and a bitter mother looking to survive at all costs. Unfortunately, Bullock and Brier's commendable work can't make the weaker aspects of the script function properly like they should, particularly the introduction of human villains into the proceedings.

Eventually, we learn that a bunch of violent mentally unstable individuals are forcing people to gaze upon the invisible beings that drive people to suicide and it feels like one threat too many. A story that gets its best moments out of elegantly simple chilling scenarios like what could be behind a door now has a bunch of unthreatening human antagonists from a Children of Men knock-off that don't bring any tension to the story. Bird Box is a movie with solid acting and direction as well as fine production values, but its flawed scripts inability to just keep things simple, as well as its need to constantly bring out broadly drawn human foes for the lead characters to face, is its Achilles heel and drags the movie down considerably. I found Bird Box to be merely serviceable as a movie but in the larger pop culture conversation, it is nice that it's generating so much discussion since that doesn't typically happen with female-led female-directed thrillers.
Posted by Douglas Laman (NerdInTheBasement) at 1:36 PM