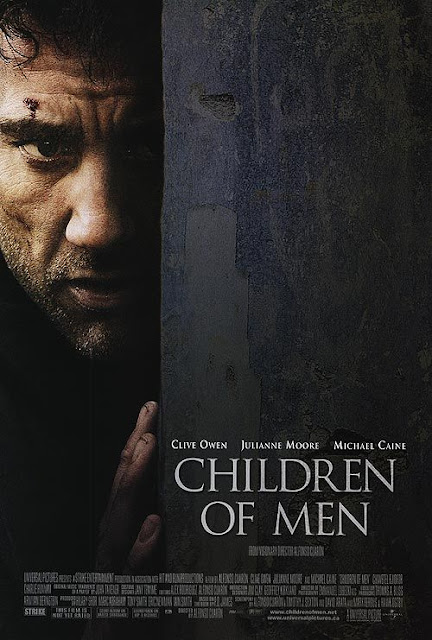 Right after Harry Potter and the Prisoner of Azkaban, director Alfonso Cuaron had a whole heck of a lot of clout, the man who had previously been known for doing more offbeat fare like Y Mama Tu Tambien was now the filmmaker behind one of the biggest movies of 2004. Cuaron parlayed this influence to get a large-scale action movie made that differed in many ways from conventional action fare, namely in its dour tone and how its lead character was not a John Rambo-esque figure that could pick up a gun and take down any person who crossed his path. Instead, the lead character would be a bitter individual going through the motions of daily life who's thrust into a narrative far larger than himself.


Cuaron is a man fascinated by protagonists swept up by much larger circumstances that are indifferent, at best, to the very existence of that protagonist. The entire visual aesthetic of Roma is hinged on Cleo being pushed to the edge of any frame she inhabits by crowds of people while Sandra Bullock's lead character in Gravity is dwarfed by the vastness of space that threatens to consume her at any moment. Theo Faron (Clive Owen) is a quintessential example of this recurring trait in Cuaron's work, he's a man who exists in the last inhabitable country (the United Kingdom) in a version of Earth that has gone decades now without the birth of a child, thus giving humanity a limited remaining amount of time to exist.

Following the death of his child, Theo, who used to champion the rights of downtrodden populations, has kept himself at a distance from the problems of the world which include government-endorsed widespread demonization of immigrant populations. This closed-off style of living gets interrupted when Theo's ex-wife, radical protestor Julian Taylor (Julianne Moore), abruptly re-enters the life of Theo Faron for a specific mission. She needs his help to get immigrant Kee (Clare-Hope Ashitey) to a destination where she can be safe. The man who previously closed himself off from any and all real-world issues now finds himself wrapped up in a mission that's far bigger than himself, one that could provide hope for the future of mankind itself.

Such a journey see's Theo never once becoming a savior figure for his species or finding out that he has some greater destiny to fulfill, rather, this is a story about how selflessness in the face of apocalyptic agony is in itself a kind of personal victory. A perfectly cast Clive Owen beautifully portrays Theo Faron as a man we all know and have even been in our own lives, someone who has become so embittered by personal tragedy that he now shrugs at the larger-in-scale tragedies happening around him. The fact that this mission to help Kee that reawakens his more selfless tendencies never once inflates his own importance is the whole point of Children of Men, the mere act of helping others should be its own reward, it shouldn't be at the service of molding ourselves into iconic figures of legend.

As said before, Clive Owen is absolutely ideal casting for this role, he makes the initial petulant version of the character reek of authenticity in an opening scene showing him breaking through a crowd of morose onlookers just to grab a coffee and he keeps up that level of realism throughout the rest of the movie. Owen is so skilled at depicting Theo as a man who always has woes of the past lingering over his head like a raincloud may hang over the head of Eeyore the donkey, a part of his performance that subtly allows for both audience empathy and for the characters aggrieved nature to ring out loud and clear. This kind of character isn't the sort of individual you'd normally think of as a typical action movie lead, but then again, Children of Men is clearly not aiming to be a typical action movie.

Eschewing convention isn't just reserved for the lead character, it also comes through in the camerawork. Characters who are swept up in larger-scale surroundings isn't the only hallmark of Alfonso Cuaron's directorial work, extended sequences depicted through a single shot are another fixture of his filmography. The kind of sequences modern-day cable TV dramas break out once or twice a season for big showy moments are the bread-and-butter of Cuaron's visual stylings as a filmmaker. Here, Cuaron and cinematographer Emmanuel Lubezki capture numerous scenes in Children of Men, typically ones centered on action, in extended unbroken shots that allow the intense nature of such sequences to be as properly overwhelming as possible.

These scenes captured in a single shot achieve the rare feat of being resoundingly impressive while not distracting from intimate character moments that drive these gunfire-laden sequences. The fact that all kinds of complicated stunt choreography is pulled off so naturally in the span of a single shot is similarly magnificent, God only knows how much effort must have gone into pulling off these exceptional scenes. That oft-repeated mantra of how the best visual effects are the ones you don't even notice can also be said for these kinds of one-take sequences that manage to be the most impressive element in Lubezki's all-around masterful cinematography in the similarly high-quality Alfonso Cuaron directorial effort Children of Men.
Posted by Douglas Laman (NerdInTheBasement) at 10:20 AM