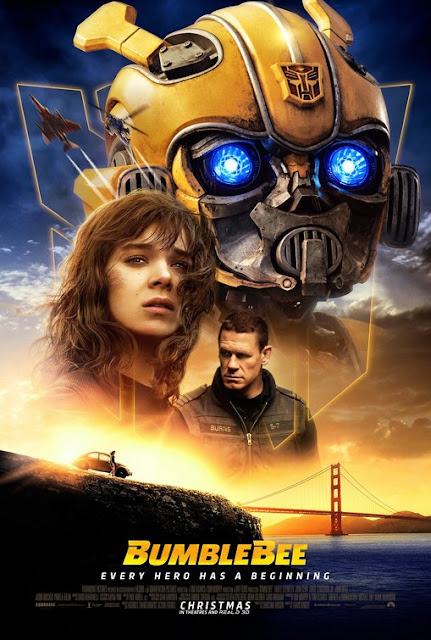 Bumblebee takes the live-action series of Transformers movies into a bold new direction, namely in the direction of actually good filmmaking! It's also taken the series into prequel territory, which means this feature takes place in 1987, about twenty years before the first Transformers movie, with Bumblebee arriving on Earth to help establish a new base for his Autobot brethren. While arriving on this unfamiliar planet in a damaged state, an 18-year-old girl named Charlie Watson (Hailee Steinfeld) stumbles upon Bumblebee in his VW bug form and takes him home as her very first car. It isn't long before she discovers that this new automobile of hers is actually a robot and the two develop a friendship just as two evil Decepticon robots come to Earth searching for Bumblebee.

It's a plot whose refreshing simplicity would be appreciated even when not being compared to the convoluted narratives of the previous Transformers movies. It's especially nice that screenwriter Christina Hodson (whose script apparently got uncredited rewrites by Edge of Seventeen director Kelly Fremon Craig) makes sure that the personal struggle of Charlie Watson is constantly present in the story, with said struggle concerning how she's still reeling from the sudden death of her father. Not only is her internal turmoil a recurring factor in the plot, but it's also handled with a welcome amount of tact, particularly in how the movie makes it clear that it's natural for people to take however long it takes for them to come to terms with the death of a loved one.

Bumblebee's story is nothing new, with even its own producer admitting last summer how it bore more than a passing resemblance to The Iron Giant, but the surprisingly moving emotional undercurrent that informs the friendship between Charlie and Bumblebee allows the movie to stand on its own two robotic feet. Plus, the two characters are so fun to watch interact with one another that the familiar nature of the pairing is easily forgivable. The second act of Hodson's script is smartly dedicated to the dynamic between these two lead characters as they bond over small-scale adventures like pranking a bullies house or going to a party. For any modern live-action VFX-driven family movie and not just one that belongs to the Transformers series, it's nice to see such an emphasis on intimate character dynamics and quite an entertaining dynamic at that!

Even the action-packed climax that sees plenty of robot-on-robot fight scenes makes sure to find room for Charlie Watson's personal struggles to get resolved and never loses sight of the friendship that's been so critical to the film up to this point. Admittedly, the supporting characters in this film aren't nearly as fleshed out as Charlie Watson's personal dilemmas and friendship with Bumblebee. Charlie's family, for instance, consists of the sort of broad archetypes you'd find on any basic sitcom, but at least the supporting players are predominately functional in whatever role they serve in the story at large. Plus, characters played by John Cena and Jorge Lendeborg Jr. offer up the chance for those charismatic actors to be entertaining in their respective roles.

The best of the live-action performers is easily Hailee Steinfeld, whose ability to portray realistic teenage characters so outstandingly well in The Edge of Seventeen is a perfect fit for this films attempts to treat Charlie's personal problems with actual gravity. To boot, Steinfeld does a great job interacting with her CGI co-star, one can easily forget that Bumblebee is just a computer-generated effect given how naturally she interacts with him. The animation team responsible for bringing the character of Bumblebee to life deserve similar levels of praise, particularly in how well they realize the character's potential for physical comedy which gets some of the biggest laughs of the entire movie.

Both Steinfeld and Bumblebee are working under the direction of Kubo and the Two Strings helmer Travis Knight, who becomes the first person that isn't Michael Bay to direct a live-action Transformers movie. Aside from some odd editing choices and an oddly artificial appearance to certain scenes, Knight transitions into live-action filmmaking in fine form, particularly in terms of making the robot fight scenes easy to follow. These spectacle-driven sequences are aided by new designs for the Transformers that simplify their appearances greatly compared to the previous movies. The fact that the Transformers now look more like they did in the original 1980's cartoon is a nice shout-out to long-time fans of the franchise but it also just works as a stand-alone visual element to help make the robots less visually abrasive.

Like last year's Jumanji: Welcome to the Jungle, Bumblebee is a movie that sounds like a total cash-grab for family audience dollars on paper that, in execution, ends up surpassing expectations thanks to a script that's got a light-hearted yet character-driven nature to it. Merging those two elements together so well is how Bumblebee actually got me to be totally invested in the story of Charlie Watson and the friendship she strikes up with Bumblebee. Even if there were no other vastly inferior live-action Transformers movies to compare it to, Bumblebee would still stand out on its own merits, particularly in its screenplay, as a well-done motion picture that (obvious pun inbound) offers up more than meets the eye.
Posted by Douglas Laman (NerdInTheBasement) at 12:51 PM