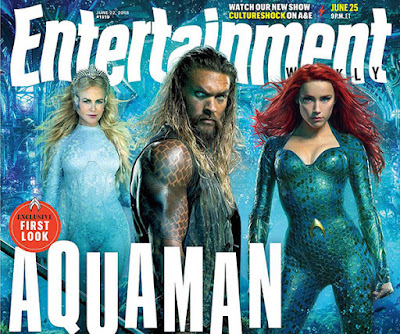 Watching all of the fascinating box office up's and down's that were occuring all throughout this holiday week has made me excited as heck to write up my weekly box office report this morning, there's just so much to talk about! All of this box office discussion over the last domestic box office frame of 2018 kicks off with Aquaman, which topped the domestic box office yet again with $51.5 million, a measly 23% dip from last weekend, one of the better second-weekend drops on record for a superhero movie. The feature has now grossed $188.7 million domestically and seems on course for at least $280-290 million domestically and could crack $300 million domestically if it continues to hold as well as it did over the past and over this weekend.

Last weekend, it looked like Mary Poppins Returns was down for the count with only a $23.5 million opening weekend but the family movie musical managed a solid second weekend that bodes well for its long-term domestic box office prospects. In its second frame, Mary Poppins Returns scored $28 million, a 19% increase over last weekend. That's the second smallest second-weekend drop ever for a movie that opened in over 4,000 locations, only behind the 21% second-weekend increase of Sing. With $98.9 million accumulated after 12 days of domestic play, this Rob Marshall directorial effort still feels like it isn't quite as big as it should be given its $130 million pricetag and how wildly lucrative live-action Disney family movies connected to classic Disney fare have been recently but it's clearly got some strong word-of-mouth working for it and is guaranteed a final domestic haul far above the typical domestic box office gross of live-action musicals.

Bumblebee seems to be the Christmas 2018 family movie that's drawn the short straw given that it's the only one of the non-Aquaman holdovers in the top nine this weekend to decrease from last weekend. While a 5% dip is solid even during the lucrative holiday season that sees movies increasing from weekend-to-weekend, it needed to hold better than that after it bowed to only $21.6 million last weekend. With another $20.5 million generated this weekend, this new Transformers movie has only grossed $66.7 million after ten days of domestic release and is headed for a final domestic gross in the neighborhood of $115-125 million. Though it had larger than expected fall last weekend, Spider-Man: Into The Spider-Verse turned things around nicely this frame by increasing 11% to a third-weekend gross of $18.3 million. Having grossed $103.6 million after 17 days of release, it looks like this one is headed for a final domestic cume of $160-170 million. If it ends up on the higher end on that projection, it'll surpass Hotel Transylvania 2 to become the biggest Sony Pictures Animation title in history. Going up a whopping 24% this weekend was The Mule, which took in another $12.7 million for a $60.6 million domestic total. Barring a massive plunge in the next few weekends, it looks like this will become only the sixth Clint Eastwood directorial effort to cross $100 million domestically.

What an odd creature Vice is at the domestic box office. It's $7.7 million three-day opening weekend isn't all that great (it's about 26% behind the wide release opening weekend of The Big Short) but this is still the fifteenth biggest opening weekend ever for a movie about a U.S. President (fictional or non-fictional). To boot, it has grossed $`7.6 million in its first six days of release, ahead of what The Big Short took in after its first six days of wide release and the movies major award season presence ensures it'll be able to stick around through January. This movie cost too much with a $60 million budget but right now it's doing much better than I thought it would and it's on track to do much better than usual for a film about a non-fictional U.S. President. It's also already, after just six days of release, the biggest movie ever for Annapurna as a self-distributing studio.

Vice wasn't the only new wide release entering the marketplace this weekend, we also had Holmes & Watson, A.K.A. the movie Sony/Columbia reportedly couldn't even sell off to Netflix (and those people released Game Over, Man!). Grossing only $7.3 million this weekend, Holmes & Watson managed to debut 16% lower than the three-day opening weekend of Will Ferrell's summer 2017 box office disaster The House. Having grossed only $20 million since it debuted on Christmas Day, this comedy is likely looking at a final domestic total just above or below $40 million, a poor sum for a title that cost $42 million to produce and a far cry from Will Ferrell's biggest box office hits.

Second Act had a decent 11% jump from last weekend to gross another $7 million for a domestic gross of $21 million. Though far from a box office juggernaut, it looks like it was a good move for STX to shift the film to this release date, it's working well as smaller-scale counterprogramming to all the tentpole in the marketplace. After a bigger than expected tumble last weekend, Ralph Breaks The Internet went up a great 38% this frame (on par with the 39% sixth-weekend increase of Coco last year), giving it a sixth weekend gross of $6.5 million for a $175.7 million domestic gross to date. Maybe this one will be able to crack the $200 million domestic mark after all if it's able to play into January. Speaking of November 2018 animated movie holdovers, Christmas is over and that means The Grinch fell 50% this weekend, grossing another $4.2 million in the process and bringing its domestic gross to $265.5 million. Right outside the top ten was Mary, Queen of Scots, which grossed $2.6 million (a 16% increase from last weekend) from 841 locations for a per-theater average of $2,967 and a domestic total of $9 million. Next up we have The Favourite, which went up 15% this frame to gross another $2.4 million from 809 locations for a $2,967 per-theater-average and a $15.2 million domestic total to date.

Despite having its theater count reduced to just 868 locations, Bohemian Rhapsody posted great numbers this frame as it went up 14% from last weekend to add $2.2 million to its domestic gross, which now stands at a towering $189.1 million. I'll make a bold guess that this one will manage to get the extra $10.9 million it needs to crack $200 million domestically. Welcome to Marwen fell just 5% this frame, a decent hold that still gives it only $2.2 million in its second weekend of release. With $7.7 million accumulated after ten days of release, it looks like this one will manage to get past the $10 million mark but it won't get much farther than that, a disastrous result given its $39 million budget. Green Book went up 36%  this weekend and grossed another $1.8 million for a domestic total to date of $31.4 million. Right behind that dramedy was Indian action movie Simmba, which took in $1.7 million from 300 locations for a per-theater average of $5,751. After a steep drop last weekend, Creed II went up 3% this weekend to gross another $1.6 million, taking it to a $112.1 millon domestic gross.

Though the vast majority of holdovers saw steady increases over their numbers from last weekend, Mortal Engines was not one such holdover as it fell 41% this weekend, grossing another $1.035 million for a domestic gross of just $14.6 million. Just a couple thousand dollars behind Mortal Engines was Fantastic Beasts: The Crimes of Grindelwald, which increased 14% from last weekend (a better seventh weekend hold than Justice League last year) to gross another $1.030 million for a domestic total of just $156.6 million. Experiencing a much sharper increase this weekend was Instant Family, not too surprising given the family-friendly nature of the film (those kinds of films always prosper over the end-of-year holidays). Increasing 45% from last weekend, Instant Family took in another $940,000, bringing it to a domestic total of $64.5 million.

Before we close this article out, attention needs to be paid to They Shall Not Grow Old, which didn't make any money this weekend but posted incredible box office figures on Thursday. Despite having only two showings at 1,007 locations, the feature was the fifth biggest movie at the domestic box office on Thursday with a $3.3 million haul. This Peter Jackson directed documentary has now grossed an outstanding $5.7 million from its two days of domestic play and this feature seems poised for a solid box office run when it goes into a general theatrical release in January, one that will likely make enough money to make this the fifth documentary from 2018 to crack $10 million domestically.

The top 12 movies this weekend grossed a total of $168.2 million, which is actually a slightly below average haul for the final weekend of the year. That can be chalked up to how there weren't any juggernauts opening on Christmas Day this year, though the 2018 domestic box office has already grossed $11.69 billion to become the biggest year ever at the domestic box office, so nobody's complaining about this lighter conclusion to the end of the year.
Posted by Douglas Laman (NerdInTheBasement) at 10:50 AM