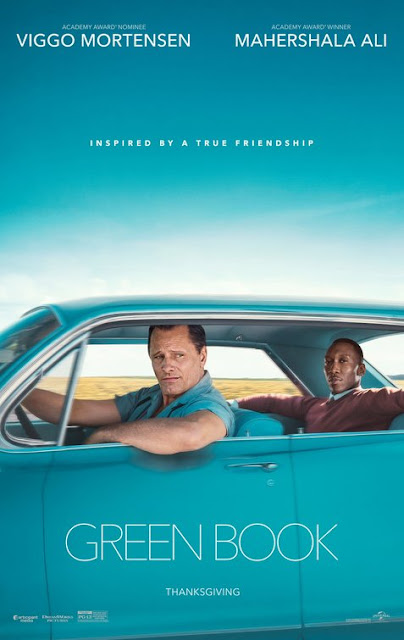 It's very strange to finally enter the critical discourse on Green Book, which has been in full swing ever since the movie premiered at the Toronto International Film Festival nearly three months ago, solely because the most I have to offer up on the movie is that it's usually passable but not much more than that. Green Book is very much a traditional crowdpleaser movie, the kind of upbeat easygoing fare that usually wins a lot of Oscars and that general moviegoers go ga-ga for, it's the kind of paint-by-numbers production that doesn't offer up one the chance to say much beyond "Well, maybe your parents will like it?  Especially if they loved The Blind Side and Million Dollar Arm?"


In the last two months of 1962, Don Shirley (Mahershala Ali) was an already famous pianist who embarked on a concert tour of the South, an incredibly bold move considering that he was a black man (not to mention a member of the LGBTQA+ community) who would be playing in establishments that would not allow him to occupy otherwise solely based on the color of his skin.  That's an immensely powerful story about one man not allowing the bigotry of American society to limit where he plays...but it is not the main story of Green Book. Our main character is Frank Vallelonga (Viggo Mortensen), an Italian bouncer whose initial scenes showing him stealing a rich guy's hat, winning a hot dog eating contest and throwing away two of his drinking glasses that a pair of black men drank out of.

The film's version of real-life individual Frank Vallelonga served as my biggest obstacle in enjoying Green Book, the movie is so assured that viewers will fall in love with this guy but, as he's depicted here, I just didn't find him all that interesting. It's somewhat impressive that Viggo Mortensen is unrecognizable in the role both physically and vocally, but he's stuck playing a caricature that never comes alive as a person and one that doesn't really have an arc of any sort once the actual story gets going. Said story involves Shirley being hired to be the driver for Shirley on his Southern concert tour. Shirley is reserved and collected, Vallelonga is vulgar and always eating, they couldn't be greater polar opposites if they tried. Perhaps a friendship may just blossom between the two of them.

Though I found it hard to get invested in this movies version of Frank Vallelonga, easily the best part of Green Book is when the movie just lets Mortensen and Ali bounce off one another in an automobile and trade humorous dialogue. Director Peter Farrelly has done many buddy comedies (including both Dumb and Dumber movies) in his time and so the routine of letting two characters establish a humorous dynamic while going on a road trip is old hat to him. Farrelly feels very much at home behind the camera in these scenes and Mortensen's character becomes exceedingly more bearable in these scenes since it's not longer just Viggo Mortensen doing an audition for John Travolta's Gotti movie, now he has a humorous ultra-serious foil in the form of Ali's Don Shirley to play off of.

Mahershala Ali thoroughly impresses with his performance beyond just how he interacts with Mortensen, in a movie that too often feels divorced from reality, Ali gives Shirley realistic gravitas that conveys all kinds of worldly experience. It's a terrific understated turn from Mahershala Ali that's easily the best element in all of Green Book. Conversely, the weakest parts of the film come when it's time to get serious about racial issues in the 1960s. This is an area director Peter Farrelly has very little experience in (unless there was some treatise on race-based civil rights nestled in his Hall Pass movie) and it shows in how clumsily Green Book navigates any event relating to race-based persecution. Prepare to grit your teeth as Green Book tackles bigotry against people of color of this era exclusively through a white lens (even when it involves Shirley being chained to a wall naked by a pair of police officers) that ensures that the perspectives of those actually impacted by said bigotry will be very rarely expressed.

Green Book is a broadly drawn and very simple movie, that's the short and sweet of it. That's not an inherently bad thing for any movie to be and it serves Green Book well when it's just about watching two actors engage in some decent banter or its hitting overly familiar but mildly poignant emotional beats. Whenever it stops the plot dead in its tracks to have Viggo Mortensen whitesplain 1960's racial woes, it's bothersome at best and cringe-inducing at worst. This is traditional cinematic comfort food that I'm sure plenty of people will enjoy, maybe you will too dear reader. This slice of cinematic comfort food just wasn't for me though despite Mahershala Ali adding another sublime performance to his resume.
Posted by Douglas Laman (NerdInTheBasement) at 3:32 PM