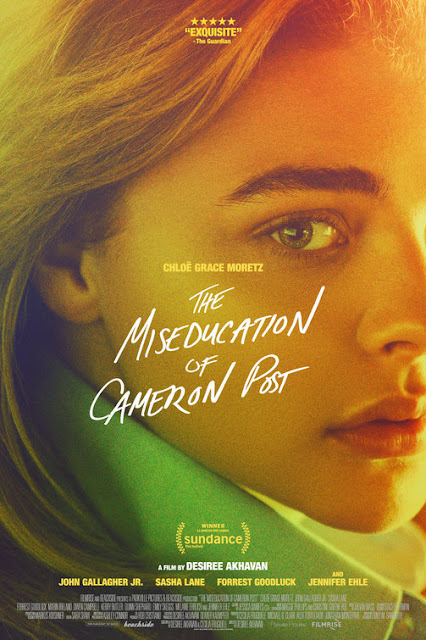 In many ways, you wouldn't know anything was askew at the primary backdrop of The Miseducation of Cameron Post, a gay conversion center known as God's Promise. The subdued nature of the movies visual tendencies means there isn't any grim color grading to indicate an atmosphere of misery while many major moments of dramatic importance aren't accompanied by a sweeping score that intrudes on the proceedings. Even the center that God's Promise is housed in looks like your typical summer camp both inside and out. But like the hungry bugs that lure prey with a colorful appearance, something can seem harmless on the outside while being incredibly malicious.


The same can be said for God's Promise, which looks to emotionally abuse teenagers in an effort to "cure" their sexuality all while the counselors in charge of running the place carry a calm and collected demeanor designed to make them look like the sensible ones.  The newest attendee here is the titular lead character of Cameron Post (Chloe Grace Moretz), who was caught having sex with the prom queen and has now been sent away by her parents to God's Promise in the hopes that her sexuality can be squashed. There may not be gates keeping in the teens here in this wretched place, but the people running this joint make sure that you're so dragged down in self-hatred that, if the prospect of escape even crosses your mind, you'll wonder, as one character perfectly puts it, "Where else is there to go?"

All of the gruesome emotional hardships God's Promise puts its characters through hit as hard as they do thanks to how screenwriters Desiree Akhavan and Cecilia Frugiuele (the former of which also directed the film) turn not just Cameron Post herself but also the various other people stuck in God's Promise into complex human beings. This is especially true of Jane Fonda (Sasha Lane) and Adam Red Eagle (Forrest Goodluck), two teens that Cameron Post eventually becomes close friends with. The trio's scenes together out in the wilderness just talking about their turmoil are some of the best in the entire film, serving as an oasis of acceptance in the God's Promise-enacted desert of self-hatred.

All three of these actors have incredibly believable and entertaining chemistry together while Akhavan and Frugiuele's dialogue in these scenes is extremely well-written. The two writers also shine in their work here with the way they've written the character of Cameron Post, an individual who's extremely closed-off once she arrives with God's Promise. One becomes so enamored with her flashback sequences and her interactions with the other characters that one doesn't even realize the screenplay has subtly been creating a gradual arc for her involving her becoming more and more outspoken. It's an arc that culminates in a fantastic scene of her singing along to What's Up by 4 Non Blondes in the God's Promise kitchen in a wonderfully vibrant an act of defiance against everyone holding her back from being herself.

Chloe Grace Moretz excels in her performance in this scene and it's one of the numerous moments where she really impresses as a performer throughout The Miseducation of Cameron Post. In fact, considering her work in the film as a whole, particularly how she handles Post's measured escalation in outspokenness, I'd say this might be her best work as an actor yet. Playing off against Moretz is Sasha Lane, who does her second noteworthy performance in an emotionally resonant LGBTQA+ themed indie dramedy following her role in Hearts Beat Loud, hopefully that Hellboy movie she's starring in next year is done in the same mold as these two films. Meanwhile, whoever decided John Gallagher Jr. should play a chipper Christian-themed youth counselor whose still helping to peddle conversion camp rhetoric deserves a gold star, this is some brilliant casting that feels like a great way to play off of Gallagher Jr.'s role in Short Term 12.

The Miseducation of Cameron Post doesn't shy away from depicting what kind of horrors go on in these conversion camps but the decision to leave most of the physical turmoil off-screen while keeping scenes like the aforementioned kitchen song sequence decidedly on-screen makes it clear that the primary focus of this movie is on showing LGBTQA+ youth enduring through times of tragedy rather than just lingering on their anguish. This is a superbly written and heartfelt movie brought to life through restrained direction on the part of Desiree Akhavan that allows the characters and their experiences to feel as tangible as possible.
Posted by Douglas Laman (NerdInTheBasement) at 11:02 AM