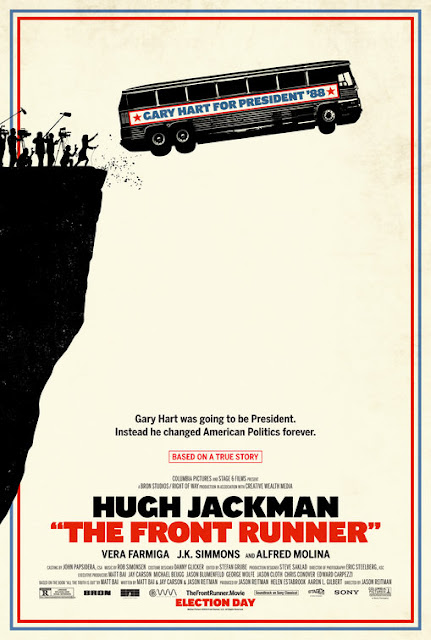 The Front Runner is a movie after Dragnet's heart in that it's very much a "Just The Facts, Ma'am" kind of production based on the three-week-long scandal that sank the Presidential chances of Democratic Party candidate Gary Hart. It presents the events that happened, a bunch of the real-life people involved with them but never creates a perspective or a personality of its own in the process. Going the "Just The Facts, Ma'am" route may have helped Dragnet solve some crimes in his own TV show, but doing the same approach here ends up meaning The Front Runner just feels empty as a movie. It's a wannabe political thriller without any of the brains, thrills or thoughtfulness that define the best entries in this subgenre.

There isn't one real lead character in The Front Runner (whose script was written by its director, Jason Reitman, as well as Matt Bai and Jay Carson), the story darts around across various people as it follows a story about Gary Hart (Hugh Jackman) rising in prominence for his 1988 Democratic Candidate for the U.S. Presidency. Just as he's looking unstoppable, some reporters for the Miami Herald spy on a little house that Hart owns and eventually find out he's seeing another woman. The story breaks out the next day and suddenly Hart's whole political career gets sidetracked. The tale is told through Hart's eyes as well as the perspective of, among others campaign manager Bill Dixon (J.K. Simmons) and Donna Rice (Sara Paxton).

Rice actually has the most interesting storyline in the film as she grapples with how, as a woman and a model, society has basically already decided who she is or how she should be. She's worked so hard to upend those stereotypes, to establish her own personality, but now she's been wrapped up in a scandal where she's painted as just being Gary Hart's mistress, the very type of image she had been trying to evade for so long. It's a heartbreaking subplot that serves as one of the rare times The Front Runner actually grapples with human emotions in an interesting way while Sara Paxton handles the character really well in her engaging performance.

Tragically, Donna Rice is barely in the movie, with the rest of the screentime having no time to actually engage with people as people. We're in "Just The Facts, Ma'am" territory here, so that means we just get recreations of historical events and no other elements of personality or characterization that could make things interesting. Why do any of that when we can have thinly-sketched versions of Gary Hart, his campaign team and real-life reporters engaging in uninteresting dialogue about how the media landscape has changed drastically in recent years. That's about as thoughtful as The Front Runner gets on exploring this topic, just characters wistfully talking about how things were simpler in the 60's and some groan-worthy cheeky dialogue about characters hoping the relationship between the media and politicians doesn't get any more over-the-top than this.

Like this Fall's disappointing Jeremy Saulnier feature Hold The Dark, The Front Runner wastes a whole movie going round-and-round on an exceedingly simple and uninteresting theme that it mistakenly thinks is utterly brilliant enough to build a whole movie around. All of this tedious thematic exploration comes at the expense of developing any of these characters at all, leaving a lot of talented actors like J.K. Simmons and Vera Farmiga, though putting in discernable effort whenever possible, with nothing to do. Even Gary Hart himself is hard to get invested in despite Hugh Jackman doing a solid job with portraying both the guy's pre-scandal media personality as well as Hart trying to cling to what he considers to be order amidst a chaotic scandal breaking out across the media landscape.

This uneventful script is brought to life through cinematography and direction clearly aping the political thrillers of the 1970's. Such an extended visual homage doesn't really go anywhere and aside from a handful of distinctive visual choices (like a wide shot of Hart and his team walking up a hill off in the distance while their dialogue is heard clear as a bell), most of the visual elements of The Front Runner are pretty forgettable. I don't know if this Jason Reitman directorial effort trying out more distinctive elements would have automatically made it better, but I can't imagine it could have made the hollow wannabe-political-thriller The Front Runner any less memorable than it already is.
Posted by Douglas Laman (NerdInTheBasement) at 1:16 PM