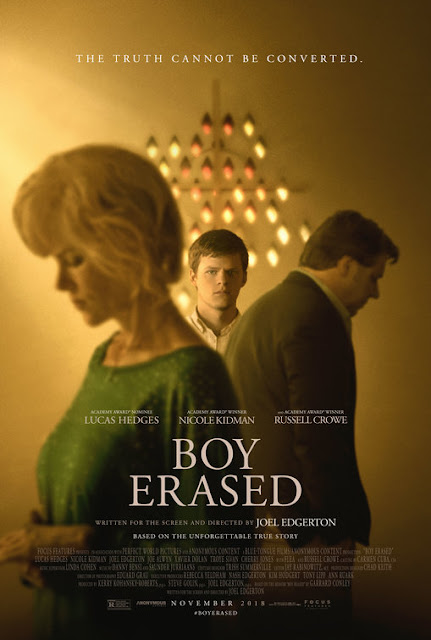 After his directorial debut, The Gift, proved to be a surprise success, Joel Edgerton decided to follow that project up with a classic sophomore directorial effort move: it was time to get serious. It was time to deliver an "artsy" motion picture that proved to the world that Edgerton was no one-trick pony, no, this was a guy who was capable of creating powerful art in addition to fun genre fare. The result of this drive to deliver a more serious-minded feature is Boy Erased, which really aims for the full nine years in terms of dark storytelling material by covering the experience of a gay teenager going to a conversion camp designed to "correct" his sexuality.

That teenager's name is Jared Eamons (based on real-life individual Garrard Conley and played here by Lucas Hedges) and he's the eighteen-year-old son of Nancy Eamons (Nicole Kidman) and Arkansas-based preacher Marshall Eamons (Russell Crowe) who clings heavily to traditional Christian values. That's clearly not the best environment for a closeted teen to live in and Jared's worst fears come true once his parents find out he's gay. Jared is quickly sent off to an isolated conversion camp where he and other attendees are tormented on a daily basis. In the middle of this turmoil, Jared finds some escape in reflecting back on his own life, particularly moments that involve his sexuality to one degree or another.

Boy Erased isn't an easy movie to watch, what with its constant depiction of men of all ages (including boys under 18 years of age) enduring physical and emotional abuse at the hands of cruel adults using religion as the justification for their bigoted behavior. Thankfully, it's a story filled with cruelness that isn't told through the prism of Brenton Thwaites as a heterosexual dude named Chad whose big character arc is discovering that homophobia exists but rather through the eyes of Jared Eamons, whose perspective allows for the complexities of trying to figure out and embrace one's own identity in an oppressive household to be explored in a detailed manner.

Drawing upon a memoir by Garrard Conley himself, Joel Edgerton's script does a great job capturing all the internalized (and occasional externalized) torment Jared endures just because of his sexuality. It isn't just in his Dad grabbing his arm at the prospect of his son being gay that serves as a demonstration of cruelty, we also get to see how everyday details like a seemingly uplifting sermon can also contain messages that make Jared feel like he doesn't belong under the same roof as his parents. Pieces of behavior both big and small are what make people suppress who they really and those kinds of actions are already taking their toll on Garrard even before he gets sent to a more overtly nefarious location like a conversion camp.

Thankfully, Jared gets rounded out enough as a character to not just feel like a punching bag for homophobic supporting characters to beat up on. Scenes like him lashing out at a perfume ad while running or a quietly sweet moment where he lays in bed with a painter at his college show the human being that the culture of his hometown and this conversion camp are trying to wipe out. Conversely, it feels like other individuals enrolled at the conversion camp, particularly Cameron (Britton Sear) who gets the worst of the movie's depiction of what abuse LGBTQA+ individuals receive at these conversion camps, could have used more concrete personality traits of their own so that they similarly feel like they exist beyond just the anguish they endure, but since Boy Erased is primarily a character piece focused squarely on Jared and not an ensemble piece, that's more of a quibble than a full-out flaw.

Edgerton's direction is almost as good as his writing, particularly in his thoughtful uses of extended single takes and the way he makes any scene set at the conversion camp feel so visually constraining. He also gets some great performances out of his actors which include Lucas Hedges giving his second soulful youthful turn in a grim late-in-the-year drama as Jared. It's impressive how Hedges is such a restrained performer yet he's able to create such a distinct personality for Jared that separates him immediately from his characters in Manchester By The Sea and Lady Bird. The biggest surprise of the movie in terms of performances has to be Nicole Kidman though, who enters the movie looking like a muted Dolly Parton cosplayer (a look that, if the end credits are any indication, is accurate to what the actual mother of Garrard looks like) and ends up turning what could have easily been a one-note role into something more emotionally complex and powerful, particularly in her climactic speech that goes to some unexpectedly thoughtful places.

The most major shortcoming in both the cast and the overall film is easily Russell Crowe who feels so miscast in the role of Marshall Eamons, particularly any of the few times we see him as a preacher and any moment where they try to wring pathos out of the character. Worse still, Crowe always talks in the same kind of vaguely American deep voice Benedict Cumberbatch uses as Doctor Strange and that vocal choice stands out to a distracting degree when fellow Australian actors Nicole Kidman and Joel Edgerton are using perfectly fine sounding Arkansas accents in their roles. Russell Crowe's poor performance aside, Boy Erased is an emotionally stirring feature that captures the humanity of its lead character as well as it portrays the anguish he suffers both at home and in the confines of a conversion camp.
Posted by Douglas Laman (NerdInTheBasement) at 12:48 PM