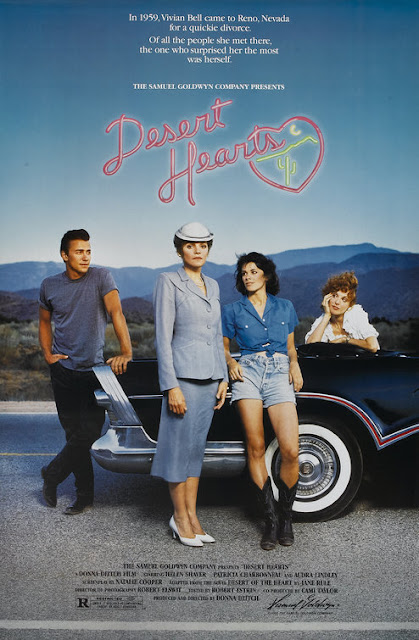 The night of November 29, 2018, was a somber one for film geeks like yours truly. This was the final night of existence for FilmStruck, a wonderful streaming service haven for discovering cinema of all shapes and sizes. Its demise ensured thanks to the idiocy of its new AT&T corporate masters, I was determined to spend this night bidding adieu to this streaming service by watching one last movie on FilmStruck. But what movie? After all, there were so many choices available on FilmStruck! To help me break through all those options, I asked my friends through social media what movie I should watch on here and one of those suggestions happened to be for the 1985 Donna Deitch directorial effort Desert Hearts.

Prior to that moment, I had never ever heard of Desert Hearts despite the massive cult following its garnered in the three decades since its release. But it sure did sound like it would be up my alley and so that was the movie I picked to close out my FilmStruck experience. Turns out, I made an excellent choice, even entirely divorced from the personal sentiment context in which I watched it, Desert Hearts is an outstanding movie that I feel like a fool for being completely unaware of for so long. The premise of this lovely motion picture concerns Vivian Bell (Helen Shaver) traveling to Reno, Nevada in 1959 to help speed up her impending divorce.

While staying here, she takes up residence at a ranch owned by Frances Parker (Audra Lindley) and soon meets a local young lady by the name of Cay Rivvers (Patricia Charbonneau), whom Parker treats in an overly controlling manner. Rivvers and Bell couldn't be more opposite of personalities if they tried, Rivvers being a buttoned-up and reserved schoolteacher while Bell is an outgoing sort who speaks what's on her mind. Both of them do share some similarities, like an uncertainty regarding what the future holds for them individually and they enjoy the other's companies. Their initial interactions lead to a romance that's bound to garner exclamations of "Harold, they're lesbians!" across Reno, Nevada.

Natalie Cooper's screenplay for Desert Hearts results in a movie that's divided into two halves, with the first focused on fleshing out the two lead characters by way of how they react to events in their private lives, specifically Vivian's struggles with getting her divorce finalized while Cay has her own problems with trying to realize her ambitions whilst working at a casino. These quiet dialogue-driven scenes get the distinct personalities of these two as well as the supporting characters in their lives across wonderfully. Like a cherry on top of a sundae, these superb exercises in characterization also contain a number of instances of sharply written dialogue on the part of Cooper, she's able to pen exchanges that have a distinct identity to them without forgoing the naturalistic ambiance of the feature in the process.

The second half of our story is primarily interested in the romance between our two leads that has begun to flourish and thanks to how well Desert Hearts has previously set up these characters, I was fully emotionally invested in this pair and rooting for them to end up together. Thanks to how well the film's first half has solidified all the restrictions and turmoil placed on the lives of these two characters, seeing them share their first kiss alone feels as momentous of a victory as can be. They've finally found someone they can be themselves around and the exploration of their romantic infatuation with each other is something director Donna Deitch (herself a lesbian), whose work here is remarkable overall, handles especially well.

For typical scenes depicting any sort of female romantic attraction in Hollywood cinema, the default has been for such scenes to be filtered through a male gaze lens that renders it attractive for male titillation but reduces the humanity of the woman being gazed at in the process. For Desert Hearts, just the way the camera is positioned in capturing moments of female intimacy make it clear that Deitch is not doing this for the pleasure of male viewers. No, these moments are strictly for the benefit of enhancing the characters of Vivian and Cay, they're here to show them finding solace in one another, to show that it's OK for Vivian to not have all the answers (that moment where Cay tenderly promises to help teach Vivian anything she wants to know before they get into bed together for the first time is so sweet that it makes my heart melt just thinking about it), to show Cay that she's found someone who wants her for who she is.

Deitch has bucked the typical male gaze method of filming scenes depicting female same-sex romance in favor in favor of filming them in a manner that emphasizes the humanity of the two characters and Desert Hearts is all the better for it. Both the screenplay by Natalie Cooper and the direction of Donna Deitch, not to mention the two marvelous lead performances from Helen Shaver and Patricia Charbonneau, make the humanity of this tale so emotionally captivating that a final scene showing two people talking at a train station, with nary a big emotional gesture like a kiss in sight, something so immensely poignant that'll it move you to tears in an instant. Like the best romantic dramas or the streaming service FilmStruck come to think of it, Desert Hearts captures one's heart and never lets it go.
Posted by Douglas Laman (NerdInTheBasement) at 11:16 AM