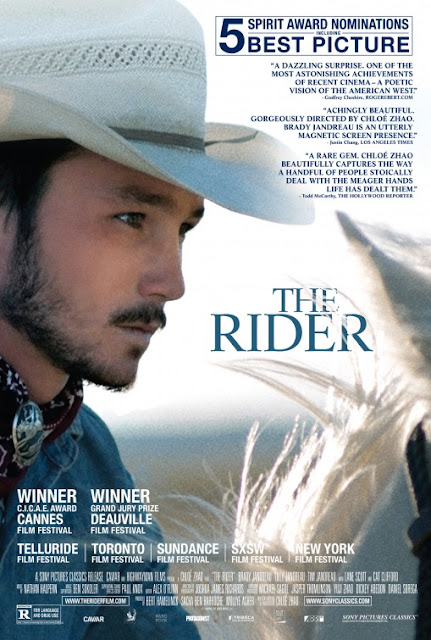 We'd all like to believe we have a firm grasp on how our identity is formed but that's simply not true. Our identity is much like a river, it ebbs and flows depending on what it runs up against. All those external factors in our lives, some big, others small, have an impact on how we define ourselves. Sometimes such outermost circumstances help us to grow in positive ways, but sometimes they're more constrictive than anything else on our personalities, particularly when it relates to a society trying to keep someone from stepping out of traditional norms. Such a specific scenario is what the lead character of the tremendously thoughtful Chloe Zhao directorial effort The Rider is grappling with.


This protagonist, Brady Blackburn (Brady Jandreau), is a rodeo man who has recently suffered a severe head injury that left him with a metal plate in his head and stitches in his head. This job was the only way he could bring in money for his financially struggling family (consisting of just his dad and his sister) and now he's looking around for safer ways to make a buck while he recovers. That's proving to be difficult when all the men in his life, save for his father, are constantly asking him when he's gonna get back on the rodeo circuit. Accepting his vulnerable state and finding another line of work, that's just not how real men are supposed to behave! Brady finds himself torn between adhering to his town's conception of how men are supposed to act and what he actually wants to do with his life.

The internal battle between living up to conventional ideas of masculinity and embracing one's individual desires is how The Rider explores how external elements influence one's personality to such a riveting degree. With his right hand struggling sometimes to work properly and his head injuries, it's clear to both Brady and the viewer that just going back out onto the rodeo circuit is a death wish, the guy needs to find other ways to make a living. A beautiful sequence that shows that there is hope for a more tranquil existence after this accident shows Brady simply riding atop a horse across a prairie. He's not bucking it or otherwise harming it to assert his dominance, he's simply on the horse's back as it moves about the landscape.

Perhaps a career in treating horses like people instead of as an outlet for masculine-associated acts of aggression could be a path for Brady in the future? That would likely be a path Brady would choose in a heartbeat if it weren't for the exceptional ways that The Rider shows Brady being constantly subtly degraded for not immediately going to the world of rodeo riding. Shades of Geoffrey Owens getting needlessly picked on for simply working at a Trader's Joe (which occurred long after this film was released) can be seen in how an acquaintance of Brady's is astonished that Brady could be making an honest living in a grocery store instead of just going right back to the rodeo life. Restocking shelves, helping customers, keeping a store that sells food clean, these are not uber-manly jobs! How could Brady engage in them?

The Rider's depiction of how an individual can struggle in trying to pursue their own ambitions in the face of societal expectations is enhanced by the incredibly well-crafted performances. Similar to the 1990 feature Close-Up, The Rider has real-life individuals portraying either themselves or variations on themselves, there aren't any professional actors to be found here. This bold decision is one that pays off immensely for the motion picture, particularly in how characters feel so fully-formed the moment they step onto the screen. The first time we see Brady and his father (the latter individual played by Tim Jandreau) interact, years of experiences come through in their dynamic. It's clear that nobody in the cast here ever pondered what their motivation for a given scene was when these performances are clearly fixated entirely on real-world experiences.

All of these realism-soaked performances are varying degrees of impressive but Brady Jandreau might be the very best of them, he brings to life his characters complex nature so beautifully, his emotionally tender visits with friend Lane Scott or scenes dealing with his frustrations at the world have equal levels of believability to them. Jandreau makes the multi-faceted nature of his character (presumably based on his own life) so vibrantly realized that the notion of shoving Brady Blackburn into just the expectations of how society expects a man to behave becomes all the more tragic. The assorted performances are brought to life through exceptional cinematography by Joshua James Richards and similarly top-notch direction from Chloe Zhao.

Zhao also penned the wonderful script that explores its primary theme of society expectations vs. personal goals beautifully, particularly in the character of Lilly Blackburn (portrayed by Lilly Jandreau), Brady's younger sister. A teenage girl on the Autism spectrum (great to see not just a woman with Autism in a movie but also a character with Autism played by a person with Autism), she works just fine as both someone Brady can confide into and as an engaging character in her own right. But she also serves a purpose as functioning the one character in the world of The Rider that throws societies expectations to the wind. For instance, everyone else is dressed as you'd expect people to in a rural town like this one with lots of cowboy boots and cowboy hats yet she has no problem just showing up to a rodeo in Sesame Street themed pajama pants.

"You just do whatever you like, huh?" Brady observes to his sister at one point and she's all too happy to respond in the affirmative, she's not one to adhere to the expectations of society or even her father, she just goes for whatever she pleases. She's fully accepting of who she is, a sharp contrast to Brady who is in a constant state of internal quarreling over letting his own individual personality take precedence over what society thinks he should be. After all, as Brady himself says at one point, "...God gives us each a purpose. For a horse, it's to run across the prairie. For a cowboy, it's to ride." Maybe that is the purpose of a cowboy. But does that make it the purpose of Brady Blackburn?
Posted by Douglas Laman (NerdInTheBasement) at 9:37 AM