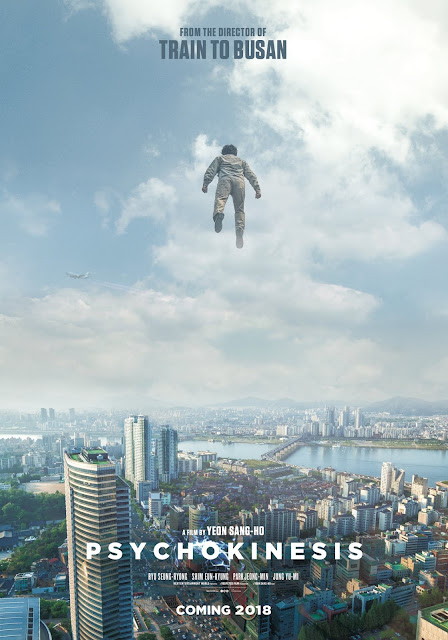 Superhero movies have been a major fixture of American cinema for decades now but why should Americans have all the fun? Countries all over the world have produced their own superhero movies to varying degrees of success, including the Australian comedy Griff the Invisible, the Japanese comedy Zebraman and last year's Russain blockbuster Guardians, which features a dude who transforms into a giant bear. One of this year's newest example of a foreign superhero movie was Psychokinesis, the newest film from Train to Busan director Yeon Sang-ho and a movie that has been called the first South Korean superhero movie (I have my doubts about that).

Interestingly, Psychokinesis, at least in the set-up for how the lead character gets his superpowers, feels like a precursor to this year's Venom movie in that it's about a schlubby screw-up, here named Shin Seok-heon (Ryu Seung-ryong), getting strange superpowers by way of accidentally bonding with an outer space entity that crash lands on Earth. The similarities end there though, instead of proceeding to chow down on frozen tater tots, Shin Seok-heon uses his newfound abilities of moving objects with his mind (hence the title of the movie) to try and reconnect with his daughter, Shin Roo-mi (Shim Eun-kyung), who is in the process of protesting a construction company that's looking to forcibly bulldoze down her business and people's homes. She doesn't want much to do with her estranged father but she and her associates could probably use a superhero, even an unorthodox, right now.

Psychokinesis is clearly working with a much smaller budget than your typical American superhero movie, and smartly, it embraces those budgetary limitations by telling a smaller-scale story. While action sequences make find plenty of ways to use Seok-heon's newly discovered powerset, the villains here are not aliens or armies of robots but rather land developers who are looking to take away people's homes with the aid of local police while the scope of the story is limited to primarily the father/daughter relationship. Going smaller in scale means Psychokinesis ends up both having its own distinct identity as an individual motion picture as well as being a great example of how versatile the medium of superhero storytelling can be.

The only real issue with making the movie this intimate in nature is that, because so much of the focus is on the lead characters relationship with his daughter, it does end up reinforcing how Shin Roo-mi comes up short as a character. She's at least got her own agency as a character but I yearned for her to be allowed to also have a memorable personality of her own beyond just being painted as the stuck-up and bitter yang to her father's flawed yang. The same issue of women getting to actually be human beings instead of just props to the male leads that plague American superhero movies is, unfortunately, still present in South Korea's (supposedly) first attempt at exploring this type of storytelling.

Thankfully, the rest of the movies pretty darn good, especially in its welcome dose of political commentary (continuing the trend of merging high-concept genre fare with socio-political elements that made Yeon Sang-ho's Train to Busan so popular) that explores how big business and government forces tend to hurt the ordinary people they're supposed to serve and protect. Almost as enjoyable as the subtext running throughout the film are the enjoyable performances that include a smart lead turn by Ryu Seung-ryong that knows just how far to push his characters slovenly attitude without alienating the viewer. Jung Yu-mi gives easily the best performance in the entire movie with her work as Dr. Hong, she enters the story two-thirds of the way into the movie but she immediately makes her presence known thanks to how much fun it is to watch Yu-mi juxtapose her characters villainous nature with a well-realized calm, collected and casual demeanor that would be more appropriate for someone making a Starbucks order, not someone ordering the destruction of people's livelihood.

As for the action sequences, they're all-around solid aside from some clunky editing and the fact that the way they realize Shin Seok-heon's flying abilities felt too visually derivative of the flying effects in the overall inferior superhero film Hancock. Psychokinesis finds a number of entertaining ways for Seok-heon to use his superpowers to save people in a climax that, thankfully, keeps its feet firmly grounded in reality and characterization, this is not an example of a superhero movie whose finale feels like an underwhelming fistfight capper to what was previously a character-driven outing. Instead, Psychokinesis maintains its character-driven and sociopolitically conscious nature all the way through which makes for a noteworthy superhero movie that bests many far more high-profile American superhero movies in both fun and overall quality.
Posted by Douglas Laman (NerdInTheBasement) at 11:57 AM