Welcome to Marwen Is Too Enamored With Empty CGI Spectacle To Go Beyond The Valley, Er, Town Of The Dolls 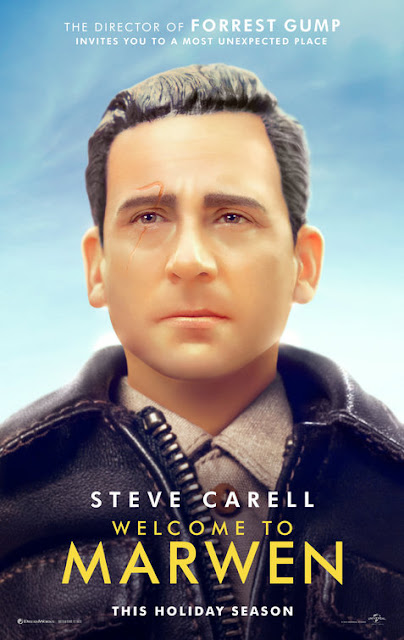 Gotti. Life Itself. Red Sparrow. Fantastic Beasts: The Crimes of Grindelwald. These are the worst movies of 2018 and their newest companion is none other than a brand new Robert Zemeckis directorial effort. The man responsible for making toons and humans interact, for taking us to places that don't require roads and for making us all cry over a volleyball can also now be known as the filmmaker guilty of bringing Welcome to Marwen into the world. Clearly meant to be a stirring inspirational drama, Welcome to Marwen is instead a staggeringly inept endeavor, a whole bunch of motion-capture animated nonsense that doesn't even try to be thoughtful or introspective regarding the experiences of its lead character.

That lead character is artist Mark Hogencamp, here portrayed by Steve Carell, a man who was the survivor of a violent hate crime that left him without any memory and with severe physical impairments. Now unable to draw like he did in the past, he has turned to photography as an outlet for artistic expression, specifically photography of dolls in World War II settings. If you walk into Welcome to Marwen unaware of Hogencamp or any of the movie's marketing, you're going to be very confused by the opening scenes, the very first of which establishes that much of the film will be told through walking talking motion-capture versions of the dolls that carry the likeness of live-action actors.

In these sequences, Hogencamp is represented by World War II captain Hogie who resides in the town of Marwen whose only other residents are five female dolls that represent five important women in Mark's life and fight off Nazi dolls. The very first of these scenes plays out like a Toy Story knock-off made by the makers of Ratatoing and it doesn't get much better from there. Constantly leaning on the CGI doll sequences ensures there's plenty of computer-generated spectacle on display but such scenes are done at the expense of actually exploring live-action Mark as a character. Any of the allegories for real-world woes that emerge in the doll scenes are incredibly obvious at best and, in the case of a villainous Belgium witch, outright nonsensical at worst.

I did not mistype that, there is a villainous Belgium witch in this story named Dejah Thoris (she's played by Diane Kruger). She abruptly enters the story floating through the air and looking like a character straight out of Foodfight! Her presence never gets less intrusive from there. She ends up being a representation of Mark's addiction, something I know because Captain Hogie shouts at her "YOU'RE MARK'S ADDICTION!!" That's the climax of a clumsily executed subplot about Mark being addicted to his medication that I had previously totally forgotten even existed in the film. Dejah Thoris also forces live-action Mark to build her a time machine that ends up being the Back to the Future DeLorean, complete with it traveling through time and leaving fiery tiremarks in its path.

You know a movie like Welcome to Marwen is bad when these kinds of ludicrous plot developments don't end up being even entertainingly bad, they're just glaringly obvious instances of the screenplay (penned by Robert Zemeckis and Carolin Thompson) becoming so enamored with the CGI doll stuff  that they forgot to add any human underpinnings to the story. Heightened material and relatable human struggles can co-exist, Spider-Man: Into The Spider-Verse is masterful proof of this! But in Welcome to Marwen, all of the CGI doll sequences are a bunch of empty noise that only ever intersect with the real-world segments of the story when it's time for a heavy-handed metaphor.

The lack of anything substance in these scenes means that the five (eventually six) women dolls that co-exist with Captain Hogie never become more than just one-note caricatures, with one of them simply being a broad Russian stereotype, for instance, while another is representative of a European adult film star that Mark is fixated on. The doll sequences can't even be seen as a chance to show off impressive visual effects technology since the dolls all occupy that weird Mowgli realm of motion-capture acting where CGI characters never find a proper balance between looking like their live-action performers and looking like a stylized CGI creation. The dolls in Marwen look more creepy than anything else and are far from ideal vehicles to spout cloying life lessons.

As for the rest of the film set away from Mark's CGI doll landscape, it's a snooze, with Steve Carell relying on a whole bunch of broad ticks and quirks for his half-baked portrayal of Mark Hogencamp that, for the first time in my life, had me appreciating Carell's comparatively superior performance in The Incredible Burt Wonderstone! Supporting actors like Leslie Mann and Eiza Gonzales have nothing to do working under the direction of Robert Zemeckis, who's totally phoning it in behind the camera even during supposedly pivotal scenes like a climactic courtroom speech by Hogencamp that's clearly meant to make the audiences heart soar but is so poorly filmed and executed that it just lands with a thud. Even the score by Alan Silvestri, the man who was clearly trying to infuse Mac & Me with musical grandeur, has a disposable listless quality to it and if even Alan Silvestri can't muster up much creative enthusiasm for a movie, you know something's gone awry. That's the kindest way to describe what's happened with Welcome to Marwen, a disastrous attempt to turn a Small Soldiers knock-off into an inspirational drama.
Posted by Douglas Laman (NerdInTheBasement) at 9:57 AM