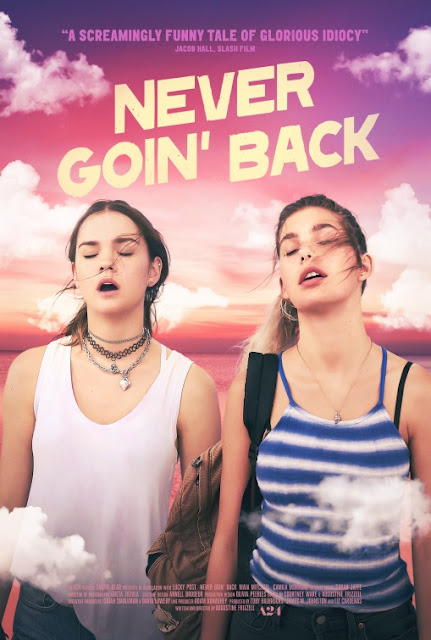 For the teenage lead characters of Never Goin' Back, it's all about getting to Galveston. Specifically, a Galveston vacation that life-long best friends Angela (Maia Mitchell) and Jessie (Camila Morrone) have been saving up money for, a not so easy task given the small paychecks they receive at their day-to-day job. The movie follows them over the course of a handful of days as things spiral wildly out of control in their lives as they got robbed, have their jobs threatened and accidentally gobble down some weed that sends them on one heck of a drug trip. During it all, they're both clinging to the hopes of managing to get to Galveston and also their crucial friendship.


Taking place in the South of Texas (hey, that's the state I live in!), Never Goin' Back doesn't shy away from depicting the more ramshackle aspects of the town Angela and Jessie call home, the houses and places of business they visit have a realistic down-to-Earth quality to them that feels like it comes straight out of reality. This isn't like the average network TV sitcom where characters that are supposed to work minimum wage jobs can still afford lavish apartments, rather, the cash-strapped circumstances Angela and Jessie are trapped in are reflected throughout the vast majority of the environments they inhabit that really leave an impression in one's mind due to their intense sense of realism.

The two lead performances of Never Goin' Back are even more entrenched in fascinating reality than the sets, Maia Mitchell and Camile Morrone are absolutely hysterical together in their performances here. Even when it feels like the script might be going around in circles for a moment, these two have such richly humorous chemistry together that it's hard to mind. They totally sell the idea of their characters being friends who have seen each other through all kinds of mayhem and do so while being immensely hilarious. If there's any justice left in this o'l world, Maia Mitchell and Camila Morrone will get paired up again for other feature films in the future because they make for an excellent duo to center the story around.

Almost as much fun as the main duo is how screenwriter Augustine Frizzell takes a cue from Superbad and recognizes both how meaningful friendships you have as a teenager can be and how a lot of stuff that's super important when you're a teenager really is actually comically dumb in the grand scheme of things. Also like Superbad though, it recognizes the silliness of certain teenage woes without treading into the territory of simultaneously mocking the teenage characters themselves. Frizzell's (who also directs the project) script clearly adores Angela and Jessie in all their foul-mouthed coke-snorting glory and as the movie goes on it's hard not to get similarly wrapped up in their escapades.

Even if its end up resulting in a movie that runs under 80 minutes without credits, Frizzell's script does have its fair share of extraneous plot elements to it, namely any of the times we cut back to Angela's brother and his personal life feel like scenes that should have been left on the cutting room floor. Never Goin' Back sometimes feels like a scraggly film in terms of pacing but there are enough successful instances of comedy throughout, particularly through the hysterical dynamic between the two lead characters, to help compensate for that issue. Plus, this is the only movie of 2018 (that I'm aware of) to feature Kyle Mooney, that has to account for something.
Posted by Douglas Laman (NerdInTheBasement) at 2:05 PM