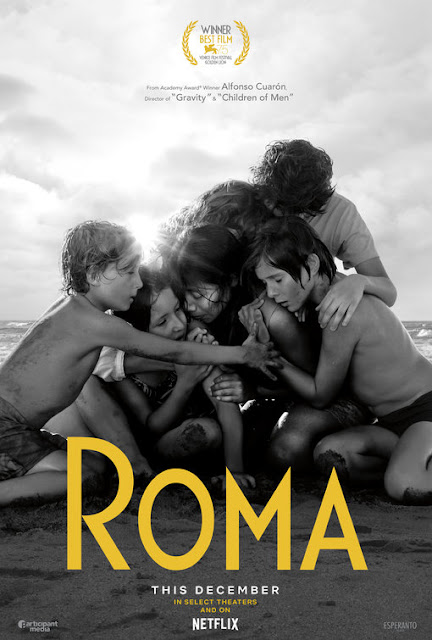 For his 21st century directorial efforts, Alfonso Cuaron has gone big in scale. He's helmed films about time-traveling wizards, a post-apocalyptic chase movie and also a struggle for survival in the vacuum of space. Though all of these films were heavily character-driven, they spared no expense in communicating the grandeur of the situations its protagonists had become entangled in. Though his newest movie, Roma, has its fair share of scenes depicting events like wildfires or revolts that are large-in-scale, this is a more intimate affair compared to what Cuaron has done in his 21st-century filmmaking career, one informed by his own personal childhood rather than fantasy worlds concocted by J.K. Rowling.


Our central character for Roma is Cleo (Yalitza Aparicio in her first ever foray into acting), whose primary occupation is working as a maid for Sofia (Marina de Tavlra) and her family. Cleo is someone that frequently falls into the background for the people she works for, her name only being called out when one of Sofia's kids wants a snack. The story cleverly & subtly reverses Cleo's position in society by having its script (penned solely by Cuaron) primarily follow Cleo's experiences working in her job while dealing with a newfound pregnancy. Meanwhile, Sofia's struggles stemming from the behavior of her husband play in the background while larger historical events happening in Mexico City in this era are pushed even further into the storytelling background.

Cleo takes prominence in the story but one of Cuaron's primary visual traits here is to intentionally make sure Cleo doesn't stand out in any given shot in order to emphasize how much the world tends to overlook her. Typically, Cleo is off to the side or relegated to the background of any given frame that she shares with Sofia's family and even shots showing her outside of her job see her typically being consumed by crowds of people. The decision to film the movie entirely in black-and-white further enhances how Cleo intentionally can blend into any frame she occupies, there isn't even a distinctly colored costume to separate her from the monochromatic backgrounds or other characters she interacts with.

The distinctive nature of Alfonso Cuaron's cinematography for Roma doesn't end there though as Cuaron's well-known affinity for extended single takes continues on here. This may be the most impressive visual element of Roma for me simply in how much I marveled at how much work must have gone into pulling off extended shots that have Cleo surrounded by countless amounts of people going about their own business. The extra's in these shots do an impressive job of bringing to life, without the aid of cutaways or other editing techniques, a consistently maintained realistic rendering of the hustle and bustle of Mexico City to dwarf the character of Cleo. Cuaron also consistently films these one-take scenes in a manner that have the camera slowly tilting across the room in a manner reminiscent of that Paranormal Activity 3 scene that had a camera strapped to an oscillating fan.

Having the camera move in this fashion results in some remarkably realized scenes, most notably a scene that goes one step further in this technique by showing Cleo and her employer shopping for a crib in an unbroken camera pan that sees the camera going around in a 360-degree circle. In the span of one shot, we get to see a tranquil shopping visit gradually become infiltrated by the violent chaos transpiring in the streets below. Much like Chantal Ackerman did with unbroken shots in Jeanne Dielman decades ago, the camerawork in Roma impresses with how much it immerses one in the characters emotions and experiences to the point that you never even realize the level of craftsmanship that's going into pulling these shots off.

That excellent camerawork fixated on slower-paced shots informs the overall style of the movie, a style that, on a storytelling level, has a tendency to create too much of a distance between the viewer and the lead character. Roma knows how to do emotionally powerful scenes showing Cleo quietly coming to terms with new traumatic developments in her life but it feels like we're in need of more intimate scenes showing her as a person beyond her job or the pregnancy-adjacent torment she's going through. That being, the character of Cleo still manages to be a fine lead characters whose experiences of always being relegated to the background in both her job and in society at large is conveyed nicely by the rigidly enforced visual style of the project.

Lead performer Yalitza Aparicio compensates for much of the writing shortcomings of Cleo with her phenomenal lead performance. I would have never guessed that this was Aparicio's first acting role given how assured her work is here, her performance as Cleo is coated in riveting naturalism that conveys the humanity of her role right from the get-go. Aparicio excels as a performer in the subdued aesthetic of Roma, a scene where she depicts Cleo slowly realizing tragic news in a crowded movie theater alone leaves one heartbroken and it's not the only time Aparicio is able to emotionally move the viewer with subtle bits of acting. Alfonso Cuaron's decision to go back to more small-scale filmmaking with Roma was a brilliant one given how good Roma is but it was especially brilliant because such a decision gave the world such a revelatory lead performance from Yalitza Aparicio.
Posted by Douglas Laman (NerdInTheBasement) at 12:55 PM